Review: The Ways of Khrem by D. Nathan Hilliard 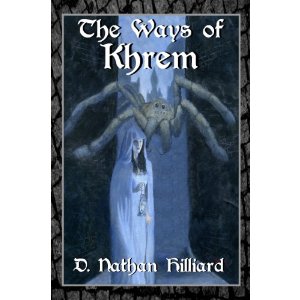 The Ways of Khrem by D. Nathan Hilliard

Amazon Product Description:
The Ways of Khrem, D. Nathan Hilliard's debut single-author collection, features three interconnected novellas: The Reach of Talanturos, The Cistern, & The Ghost of Candlewalk Lane. Cargill the Bookseller lives a quiet life, in a modest house, overlooking the vast city of Khrem...a magical metropolis of cavernous streets, lofty spires, and dark secrets. His life is turned upside down when Captain Wilhelm Drayton of the City Watch arrives at Cargill's doorstep and confronts him with his criminal past. Now Cargill must assist the Captain in solving mysteries in a city where the villain may not even be human, bringing all of his skills to bear as he finds himself at odds with gods, monsters, and psychopaths alike.


My thoughts: Overall - the whole book was amazing! I truly fell in love with Cargill!  He is the most interesting character!  Of course I love the fact that he has gone from a man with an unsavory profession to being a book seller is so very fun!  The growth of Cargill throughout the three parts is fantastic - I enjoyed every page of this book.  I would recommend this book to both teens and adults.  The book is well written, the characters are wonderful, the language and vocabulary can be tricky at times, but truly makes the story.


The author creates wonderful multifaceted characters.  Each of the main people in the book is so much more than they appear to be at the first meeting.  I was thrilled by the friendships that were created as a result of the first initial meeting in part one.


The Reach of Talanturos - Part One
In this first part we are introduced to many of the characters that we continue to see throughout the book.  The story is about the captain of the guard of Khrem trying to find a killer - he goes to Cargill for help and so the story begins....I don't want to give away the story so I won't say more about the plot.  As I have already said, the characters and the character development is fantastic.  You can't help but keep turning the pages because of the interactions of the people, even the butler is great.  I would have a hard time picking my favorite in this part of the story because I enjoyed them all for different reasons.


The Cistern - Part Two
The story continues in part two with many of the same characters while we meet a number of new people, the new people are only in this one part of the book.  This part gives the reader more  of the personalty behind both Cargill and his butler - Grabel.   In this part Cargill and Grabel go to a neighbor's house for an event and a boy falls into a Cistern.  Cargill has to choose to somewhat expose himself and help the family or allow the boy to die to keep his past hidden and his current status intact.


The Ghost of Candlewalk Lane - Part Three
In part three we are still working with the same main characters, but are allowed to know a bit more about them than before.  The ghost of Candlewalk Lane is the ghost of someone that Cargill used to know and was a good friend of a girl who he loved.  We are introduced to the Cordwood Killer and find out about the victims and their circumstances.  We find ourselves watching Captain Drayton and Cargill working together to find a killer again.  This story shows us a darker side of Cargill, the side he has worked so hard to get away from.  We have the opportunity to learn a bit more about Heinryk and Poole in this last part too - which I enjoyed.
Posted by Beverly at 8:00 AM