Blog Tour: Under the Eye of God by Jerome Charyn

This virtual book tour is presented by Tribute Books.
Tribute Books Blog Tours Facebook:
https://www.facebook.com/pages/Tribute-Books-Blog-Tours/242431245775186
Official tour site is HERE.
Welcome to The Wormhole and my day on the tour.
It is my pleasure to feature Jerome Charyn and his book, Under the Eye of God. 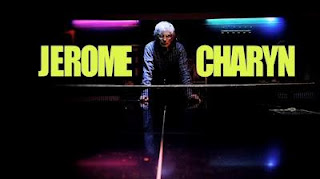 Jerome Charyn's Bio:
Jerome Charyn (b. 1937) is the critically acclaimed author of nearly fifty books. Born in the Bronx, he attended Columbia College, where he fell in love with the works of William Faulkner and James Joyce. After graduating, he took a job as a playground director and wrote in his spare time, producing his first novel, a Lower East Side fairytale called Once Upon a Droshky, in 1964.

In 1974 Charyn published Blue Eyes, his first Isaac Sidel mystery. Begun as a distraction while trying to finish a different book, this first in a series of Sidel novels introduced the eccentric, near-mythic detective and his bizarre cast of sidekicks. Charyn followed the character through Citizen Sidel (1999), which ends with his antihero making a run at the White House. Charyn, who divides his time between New York and Paris, is also accomplished at table tennis, and once ranked amongst France’s top Amazon10 percent of ping-pong players.

Under the Eye of God Book Summary
After decades of madness in the Bronx, Isaac Sidel visits the craziest state in the country.

Isaac Sidel is too popular to be America’s vice president. Once the New York Police Department commissioner, he became the most beloved mayor in the city’s history—famous for his refusal to surrender his Glock, and for his habit of disappearing for months at a time to fight crime at street level. So when baseball czar J. Michael Storm asks Sidel to join him on the election’s Democratic ticket, the two wild men romp to an unprecedented landslide. But as the president-elect’s mandate goes off the rails—threatened by corruption, sex, and God knows what else—he tires of being overshadowed by Sidel, and dispatches him to a place from which tough politicians seldom return: Texas.

In the Lone Star state, Sidel confronts rogue astrologers, accusations of pedophilia, and a dimwitted assassin who doesn’t know when to take an easy shot. If this Bronx bomber doesn’t watch his step, he risks making vice-presidential history by getting killed on the job.
Amazon buy link
http://www.amazon.com/dp/145327099X?tag=tributebooks-20


Review to follow!
Posted by Beverly at 5:00 AM 1 comments