Blog Tour: The Red Serpent Trilogy by Rishabh Jain (Giveaway too - U.S. only)

This virtual book tour is presented by Tribute Books.
The official tour site is HERE.
Welcome to The Wormhole and my day on the tour!
It is my pleasure to feature:
Rishabh Jain and The Read Serpent Trilogy. 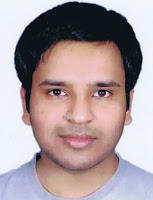 Rishabh Jain was born in the city of Kanpur, in India, in 1990. From a young age, he displayed remarkable traits of creativity and inventiveness. When a young boy of 8 or 9 years old, Rishabh left his father (himself an electrical engineer) shocked and speechless one day, when he managed to make an asymmetrical and unbalanced structure made of blocks, with which he was very fond of playing, stand stable for 2 to 3 minutes, blissfully unaware that the laws of physics and mechanics made it impossible.Rishabh entered Pathways World School in 2003, an International Baccaulaureate School on the outskirts of New Delhi, in the 8th Grade. Here, his multidisciplinary talents and interests blossomed in the creative environment of an International Level School. He was awarded an Academic Merit Scholarship from Pathways World School, for the academic years 2004-05 and 2005-06 (his 9th & 10th Grades). Being an absolutely ardent fan of and enamored by theLord of the Rings trilogy, and the Harry Potter series, it was his dream to write a story of his own as a “Trilogy.” This was the inspiration from which he conceived the genesis and plot of this current book The Red Serpent Trilogy, and he finally realized his dream and completed the book in 2006 and was issued the copyright to the same in January of 2007.Rishabh completed his High School (10th Grade) in 2006, with an award of Distinction from IGCSE, Cambridge. He participated in “Harvard Model Congress Asia” (a three-day student conference organized by Harvard University, where selected students were invited from around the world to take part in simulations of the United States Congress) in Bangkok, in September 2006. He also was a participant in Ryan International School’s Indian Model United Nations (INMUN) in 2006, which was a three-day simulation of the United Nations, wherein he received a Certificate of Achievement.While studying for the International Baccaulaureate Diploma (11th & 12th Grades) in the same school, Rishabh participated in and won 1st prize in two competitions (one for extempore speaking and the other for debate) in VIVUM Bangalore (India). He also built a Bio-Gas plant during a Community Service Project in a village of Rajasthan near Rathambore National Park. Rishabh was democratically elected by the student body for a period of two years (2007 & 2008) as a member of the Student Council (consisting of a total of twelve members representing the whole school) — a most responsible and keenly contested and coveted position.Due to the peer recognition of his multidisciplinary talents in Creative Writing, English, Literature, and General Knowledge, and his unique ability to relate to people, Rishabh was also elected as the Editor of the Annual School Magazine Rewind. In June 2007, Rishabh participated in “GLOBAL YOUNG LEADERS CONFERENCE” (GYLC) in Washington & New York. This was a global conference, where approximately 200 international students from various countries around the globe were invited to attend. The conference lasted two weeks, with one in Washington and one in New York. He was awarded “Youth Leadership Award” in recognition of meritorious achievement in scholarship, leadership and citizenship.Due to his exemplary performance in GYLC in 2007, he was invited to attend a week-long program, and as a special guest among a very few selected international students, attended the appointment and swearing-in ceremony of Barack Obama, the 44th President of the USA, in January 2009. After earning his International Baccaulaureate Diploma (11th & 12th Grades) in 2008, from among a large number of offers from various prestigious Universities, Rishabh entered the Mechanical Engineering program at the University of Illinois at Urbana-Champaign, where he presently resides and is currently pursuing his engineering degree. Amid his grueling schedule of Engineering studies, Rishabh has almost completed a 2nd book, which is a space science fiction adventure & love story.

The Red Serpent Trilogy presents a highly evolved vampire to fear: cold and callous, powerful and dangerous, possessed by mystic promises and destroyed only by silver. It is the year 2021 — the human world has degraded, its inhabitants unworthy of the supernatural gifts bestowed upon them. Compelled by ancient prophesy, an ancient vampire army takes the human race by force, sparing few lives. They await the second coming of their king, Anaxagoras, which will hurl the world into a final battle that will free the vampires from their infinite hiding. But by the hands of fate, there is one human who may save his entire race.

The Red Serpent Trilogy is a celestial fusion of science fiction and fantasy, unfolding conflicting intentions for the survival of both the human and vampire races. But in a world ruled by supernatural and mythological forces, there is only room for one race, and neither will go easily. The few survivors of the fatal vampire onslaught escape to an asteroid space station, Regnum, where they thrive as they keep an attentive watch on the vampires on the earth below. But unbeknown to himself or anyone else, Alex, half human half vampire, holds the keys to secrets that will help him realize his duties and cement his fate as either a human or a vampire.

“The evils of the World in which Anaxagoras shall come will be caused by the unworthy people of the world. Our race shall come unto the Earth and bravely wage war with them . . .”


In 2021, the Vampires attacked Earth and decimated the human population. After a fierce and bloody battle, war commander John Howe led the forced evacuation of the humans to the gigantic orbiting space station Regnum, and the human refugees have been there ever since.

Then one day, General Howe’s orphan nephew, Alexander, uncovers a terrible secret about his past — and that he may be the subject of prophesy.

“Two decades later, a new kind of evil, a Falsifier, shall come unto the Earth . . .”

The boy’s world is turned upside down when Gareng, the Vampiric General, reveals his own family ties to Alexander. As the two grow closer, Gareng begins to question the wisdom of his people waging Vampiric war on the humans. But Gareng’s own son will stop at nothing to seize control and eliminate the humans once and for all . . .

“There will be a second coming of Anaxagoras, when the sun is blocked by the moon . . .”

After learning his true origins, Alexander finds himself in an impossible situation: he must choose whether his allegiance lies with his mother’s people, or with his father’s — and condemn the other to certain doom.

“In the End of Days, the Falsifier shall challenge Anaxagoras for the fate of the world...”

But migra is thicker than water, and as Alexander embraces his role as Falsifier, he begins to hope that there could be another way.

Can Alexander forge a peace between the two warring factions — could he and Gareng ever convince the Vampires to agree — or will prophecy reach its bloody final chapter as Earth is plunged again into unrelenting war?

Giveaway!
I have been granted permission to offer
ONE paperback copy of The Red Serpent Trilogy
to ONE random commenter US mailing address only.
The rules are simple:
* Be 18+ in the U.S.A.
* leave a comment on this blog that includes a valid email address.
Winner will be notified via email.
Giveaway runs September 21 - 25, 2012.  Good Luck and thanks for entering.
Posted by Beverly at 5:00 AM 1 comments