Majanke Verstraete of Inkspell Publishing is presenting this Free Reads Week!
March 12 - 16, 2012
What is Free Reads Week?
Free Reads Week
This week, from March 12th to March 16th, InkSpell Publishing is organizing a free reads week. That means that you can read free short stories by some of the InkSpell Publishing authors.
On March 12th,  you can read Forever Yours by Shilpa Mudiganti, the author of contemporary romance novella Always You. In Forever Yours, main character Amelia loves Aaron, her fiancé. But she also loves Damon. Can one be in love with two men at the same time? How do you define infidelity? Or fidelity?
On March 13th, InkSpell releases Love, Lies and other Disasters, a contemporary romance short story by Cecilia Robert, the author of Truly, Madly, Deeply You. In Love, Lies and other Disasters, the one person Celina fought so hard to get over five years ago is back, and has kidnapped her. He says he wants a second chance to prove his love. Will she allow him to glide back into her life and heart?
On March 14th, you can read Beyond The Hidden Gate by Debbie Peterson, the author of paranormal romance novel Shadow of the Witte Wieven. In Beyond The Gate, Aynia doesn’t remember anything, save her name. Can Aeden help her remember who she is, the love they shared and the importance of the quest for which she risked her life? Or will the power of an evil warlock shatter all they hold dear?
On March 15th, InkSpell releases yet another contemporary romance short story, this time Coming Together by Naya Nikki, author of Familiar Ties. Life is complicated when you are pregnant at 17. But when the father doesn’t know and he’s marrying another right in front of you, it is bound to break your heart. What does Ellie do? Cry on her daughter’s shoulders?
Last but not least, on March 16th, author Stephanie Lawton’s short story After Taste will be released. In After Taste, nothing can shield him from the horrible dream. Nothing can protect her from a danger she can’t see.
If you want to read these mix of romantic, tense and suspenseful stories, then head over to the InkSpell Publishing website. And there’s more. Not only is InkSpell Publishing handing out free short stories to their readers, they’re also organizing a contest at the end of the week. Participants in the contest need to answer one question from each story correctly, and in return they can win a $10 Amazon Gift Card and an InkSpell novel of their choosing! What are you waiting for?
Posted by Beverly at 5:59 PM 0 comments 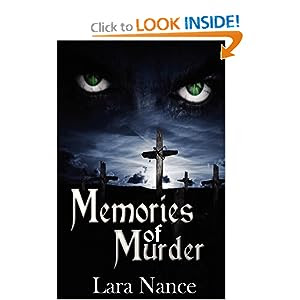 Memories of Murder by Lara Nance

***I received this book in exchange for an honest review.

Amazon Product Description:
When Maeve McKenna renounces her witch powers and accepts a low-key nurse practitioner position at a Virginia retirement community, the last thing she expects is a suicide her first day on the job. As the town's sexy sheriff, Paul Sutton, starts looking into the tragic death of his father's friend, Maeve can't help but get involved--with both the case and him. Their informal investigation unveils an old journal that connects the ruins of a nearby asylum and long-forgotten cemetery with the shiny new retirement community's memory unit--and Maeve's Alzheimer's patients. Maeve senses a sinister presence in the old asylum, calling to the patients, but in order to stop it from killing again, she must first conquer some demons of her own and reclaim the magic she's denied herself.


My thoughts:
Lara Nance has built a wonderfully described, realistic world as the setting for her story.  It was as if Rolling Gap and it's residents could be just down the road.  The characters are well developed and easy to invest in.  The "Gems" are fantastic.  Maeve is a strong main character, I was impressed with her from the start.  Paul is great.   My heart went out to both of them as they struggle with their personal demons.  The story is intriguing and fast paced; twisting and suspenseful.
I love a good thriller and this did not disappoint!  I look forward to more from Lara Nance!

Lara Nance grew up and lived in many cites through the South. She started out with a career in business/marketing for twenty years and then went back to school for a masters in nursing and is currently a nurse practitioner in Virginia Beach, VA. Having been on the fencing team in college and now living on a sailboat convinces her that she was a pirate in another life, or possibly kin to Errol Flynn... However, due to the unfortunate demise of the romantic pirates of the past, she lives out her fantasies and adventures in her stories.  (photo and bio from Amazon.com)
Posted by Beverly at 8:30 AM 0 comments