Blog Tour: Red is For Rage: Color of Evil ~ book 2 by Connie Corcoran Wilson (Giveaway too!)

Welcome to The Wormhole and my day on the tour.
It is my pleasure to feature:
Connie Corcoran Wilson and Red is for Rage.
This virtual book tour is presented by Teddy Rose @ Virtual Author Book Tours.
Click HERE for more tour information.

Description of Red is For Rage by Connie Corcoran Wilson:

RED IS FOR RAGE is the second book in the award-winning THE COLOR OF EVIL series by Connie (Corcoran) . THE COLOR OF EVILwon the E-Lit Gold Medal for Horror (Jenkins Group) and the Silver Feather (IWPA).

In Book Two, we learn more about the exact nature of Tad's paranormal power, Tetrachromatic Super Vision. Can this keen sight help Tad find Stevie Scranton? Will Tad suffer another breakdown from reliving the crimes of serial killer Michael Clay (aka, Pogo, the Killer Clown), as he did when only eight years old? Can Tad learn to harness his special sight to help his loved ones?

When Stevie Scranton goes missing, best friend Tad vows to do everything he can to find him. Even if Stevie is dead, Sally and Earl Scranton, (his parents), and Shannon, (Stevie's older sister), crave closure. Tad enlists the help of retired policeman Charlie Chandler and a team of volunteers, including Charlie's old partner, Evelyn Hoeflinger. This rag-tag team of detectives continues searching for Stevie Scranton, the runty misfit of ' Sky High. In their search, they discover a monster every bit as dangerous as Pogo and must confront him in order to save Stevie.

Tad sees auras around others that tell him whether they are good or evil. The truly evil are surrounded by a khaki aura (THE COLOR OF EVIL). At night, Tad suffers vivid nightmares that depict the crimes of the evil-doers. Michael Clay (the serial killer Pogo) escapes custody. On the loose again,  Pogo's actions restart the vicious cycle of violent nightmares. Pogo poses a threat to the entire town of , but he is especially  a threat to Tad McGreevy.

Pogo has one main goal: kill Tad McGreevy so that Tad cannot disclose Clay's location. Pogo doesn't realize that, up until now, Tad has been unable to harness the paranormal ability he possesses. Now, Tad McGreevy must try to learn to use his unique gift.  Stevie Scranton's fate hangs in the balance. Tad's power, if precognitive, could save everyone he loves.

Jenny SanGiovanni returns from her father's home in , to finish her senior year with her old classmates. She brings home a new set of problems. Jeremy Gustaffsson, the fifth-year senior boyfriend in Jenny's junior year, graduated. But Jeremy is still in town, still obsessed with Jenny, still dangerous.  When Jenny broke up with Jeremy, it made Jeremy mad. Bad things happen to good people when Jeremy Gustaffsson gets angry and  descends into a red rage.

All Jenny's cheerleader friends from her junior year are back. Many, like Janice Kramer, Heather Crompton and Melody Harris, have problems of their own. Jenny deals with adolescent issues such as self-esteem and self-worth, problems that tax her soul.  But Jenny is not alone. Another Sky High student is driven to the brink. Will that individual plunge into the abyss of despair?

And what of the adults? What has the stress of Stevie's nine-month ordeal done to Earl and Sally Scranton's marriage? What problems confront the other adults in as three evil-doers rise up to create chaos and do them harm?

RED IS FOR RAGE and rage runs rampant in this small town in the year of our Lord 2005. 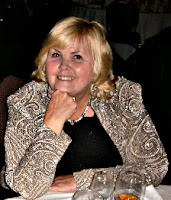 Connie (Corcoran) Wilson (MS + 30) graduated from the University of Iowa and Western Illinois University, with additional study at Northern Illinois, the University of California at Berkeley and the University of Chicago. She taught writing at six Iowa/Illinois colleges and has written for five newspapers and seven blogs, including Associated Content (now owned by Yahoo) which named her its 2008 Content Producer of the Year . She is an active, voting member of HWA (Horror Writers Association) and also a member of ITW (International Thriller Writers) which awarded her its Silver Feather Award in 2012, MWA (Midwest Writers Association), AWP (American Writing Program) and MWC (), which named her its Writer of the Year in 2010. She has won numerous E-Lit awards, a NABE Pinnacle award, an ALMA (American Literary Merit Award),and an IWPA Silver Feather.

Her stories and interviews with writers like David Morrell, Joe Hill, Kurt Vonnegut, Frederik Pohl, William F. Nolan,  Anne Perry, r. Barri Flowers and Jon Land have appeared online and in numerous journals. Her work has won prizes from "Whim's Place Flash Fiction," "Writer's Digest" (Screenplay) and she will have 12 books out by the end of the year. Connie reviewed film and books for the Quad City Times (, ) for 12 years and wrote humor columns and conducted interviews for the () Daily Dispatch.  Connie was a presenter at the Spellbinders Conference in over Labor Day.  She now blogs for 7 blogs, is a Featured Contributor to Yahoo, and comments on movies, television, politics, writing and anything else that interests her both on Yahoo and on her own blog, www.WeeklyWilson.com.

Connie lives in , with husband Craig and cat Lucy, and in , where her son, Scott and daughter-in-law Jessica and their three-year-old twins Elise and Ava reside. Her daughter, Stacey, recently graduated from in , , as a Music Business graduate and is currently living and working in .
Giveaway:
The giveaway is open worldwide.  The prize is winner's choice:
The Color of Evil or Red is for Rage
Both books are available in mobi, epub or PDF.
You must be 18+ and a follower of The Wormhole to enter.
Author Interview from Blog Talk Radio: