Review: Dead is Not an Option by Marlene Perez

Dead is Not an Option by Marlene Perez 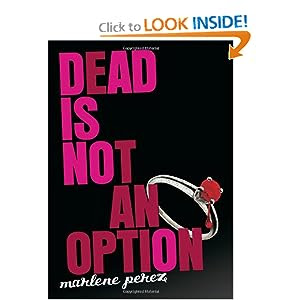 I got this book from NetGalley.

Amazon Product Description:
It’s springtime of senior year, and psychic sleuth Daisy Giordano is preparing to say goodbye to Nightshade High. But no college acceptance letters have arrived yet, and she’s beginning to worry about where she’ll end up come fall—and if it will be anywhere near her boyfriend, Ryan. But that’s not the only uncertainty Daisy’s dealing with. There’s a vamps-versus-shifters war going on in Nightshade, and things are so tense that there is talk of canceling the prom. The conflict is carrying over to the Giordano home, since Rose and Daisy are both dating werewolves and Poppy’s new boyfriend is a vampire.


My thoughts:
Although this book easily stands alone, I would suggest reading the whole series - in order.  I enjoyed the story, but there were some references to previous happenings that left me feeling, not that I was lost but that I wished I had read the first four books before this one.


The characters are wonderful!  I have to say that Lil (the jukebox) is my favorite supporting character!  You can see that the characters have been well-developed during the series because they are so cohesive and their relationships are solid.  The new relationship in the book is Poppy and her vampire boyfriend.  The addition of Count Dracule is great.


The story line keeps you interested and wanting to know more.  The author keeps you in the dark and guessing about the identity of the "bad guy" until virtually the end.


This is a great YA paranormal read!  I would recommend it to anyone grade 8 and above.
Posted by Beverly at 6:00 AM 0 comments