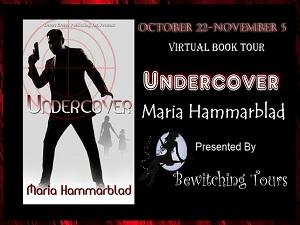 This virtual book tour is presented by Bewitching Book Tours.
Click HERE to see the tour schedule.
Welcome to The Wormhole and my day on the tour.
It is my pleasure to feature Maria Hammarblad and Undercover.

Author Bio:
Born in Sweden in the early 1970's, Maria showed a large interest for books at an early age. Even before she was able to read or write, she made her mom staple papers together into booklets she filled with drawings of suns and planets. She proudly declared them, "The Sun Book." They were all about the sun. She also claimed, to her mother's horror, that her being on Earth was a big mistake and that her alien family would come and bring her home at any moment. This never happened, but both the interest in space and the passion for bookmaking stayed with her.

As an adult Maria's creativity got an outlet through playing bass in a number of rock bands, and through writing technical manuals and making web pages for various companies and organizations. She did write drafts for a few novels, but the storytelling muse was mostly satisfied through role playing online on Myspace. It was here, while writing stories together with people from around the globe, she stumbled onto Mike. They started talking out of character, and she moved over to Florida to him late 2008. Today the two are married and live in the Tampa Bay area with three rescue dogs.

Book Description:
When Jenny Moore meets Alexei Roshenko, it's love at first sight. The tall, dark and handsome stranger appears to be the answer to every romantic fantasy any woman ever had. There is however more to him than meets the eye, and a dark and violent past is catching up with him. When Jenny decides to follow him back to Russia, she gets entangled in a web of deceit and secrets beyond her wildest imagination.

When the wheels finally touched American soil, Jenny was both relieved and nervous. She was so happy to be home she could cry, at the same time as she fretted over his papers. They looked good but could hardly be real. Alex didn't seem worried at all; he was the epitome of calm as they stood in the long line to the passport checkpoint.
Her own passport had been unused before this trip, and she opened it to look at the stamps. Alex bent over to kiss her on the cheek. He knew her well enough already to know what was on her mind. "Don't worry, I do this all the time."
The comment distracted her, and she thought he probably did it on purpose. She wanted to ask a million or so questions, but didn't even lift an eyebrow. "I can't wait to be home."
Once they reached the counter, the woman sitting there hardly even looked at the photos. She threw one glance at their documents, gave them back, and yelled, "Next!"
They waited for the luggage for an eternity, and Jenny was nervous all the way through customs. She relaxed a little once they were well into the large airport, surrounded by Americans hurrying in all directions. The protection of being in the country was more imagined than real, but she was still happier. They walked slowly hand in hand with the suitcases rolling behind them like obedient dogs, and just seeing the crowds made her heart lighter.
She wondered if her lover would miss seeing and hearing his own language, and if he would miss his own people. He was stranded in a foreign country and culture with nothing but her, with an axe hovering over his head, and all this after knowing her for just a couple of months. Thinking about it made her feel incredibly guilty, and telling herself she couldn't have done anything about it didn't help at all.
Eventually, Alex stopped and pulled their bags up next to a wall. "Are you up for the drive home, or do you want to stay in a hotel tonight?"
She kept going because he did, but now when he said it, she was very tired. "I don't know. It would be good to be home, but it seems so far away. What do you think?"
"Oh, I want to go somewhere and take all your clothes off, but what I want is not important. Your wish is my command, my sweet."
It made her laugh. "So, a hotel it is."
When they walked towards the exit, past one of the cafés, she saw a familiar face turn towards them. A smile played on the man's lips. She had seen him not all that long ago, on the other side of the world, in Alex's apartment. He met her eyes, and she said, "Ignore him."
They walked right past the old man. "They've been with us all the way. One would think people would have something better to do."
She hadn't seen anyone else, but if he said they had been there, they were there.

Giveaway!
One copy of Undercover (kindle, pdf or epub winner’s choice)
Posted by Beverly at 5:00 AM 0 comments