Blog Tour: Eyes of the Seer by Peter Dawes 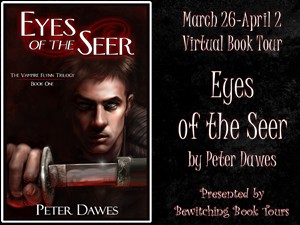 This virtual book tour is presented by Bewitching Book Tours.
Click here to see the entire tour schedule.
Welcome to The Wormhole and my day on the tour!
It is with great pleasure that I host Peter Dawes.

(author pic from Goodreads )
? When did you first realize you wanted to be a writer?
When I was in the fifth grade, the 6th and 7th grade English teachers told me about a district-wide writing contest being held in our city. Ours was a small school, granted, but the fact that teachers – who were not even my own English teacher at the time – wished me to participate convinced me to give it a shot.
I won first place.
After that and my stoic, WWII veteran of a grandfather insisted I should study journalism over law, I decided to take the hint.
? How many jobs did you have before you became a writer?
I have been a jack-of-all-trades, master of none up to this point.
? How long does it take you to write a book?
It has taken me anywhere from three weeks to several months. The very first draft of Eyes of the Seer was a three-week, 90,000 word haze of frenzied writing somewhat reminiscent of a time warp. I needed to be reminded of who I was and where the last three weeks had gone afterward.
? What would you say is your most interesting writing quirk?
I love semi-colons and oxford commas and find esoteric vocabulary absolutely delectable.
? Do you have a routine that you use to get into the right frame of mind to write?
My daily routine usually consists of rolling out of bed, crawling into the kitchen, pouring what I hope are coffee grounds into the coffeemaker, and seeing which voice inside my head is loudest that day.
? Where do you get your ideas or inspiration for your characters?
I do not get the idea for them so much as they seem to spring into existence. They tap my shoulder or wake me up at night or suddenly speak and a new voice joins the gathered throng instead my head.
There are distinct times I wonder if I have a functional form of multiple personality disorder. Fortunately, none of them have tried taking over yet.
? How do you decide what you want to write about?
I usually have a pet project or two I am working on, especially now. What I write depends entirely on what deadlines I have coming up or what mood my muse seems to be in at the time. This is why I like having multiple projects.
? What books have most influenced your life?
With regard to my writing, probably Roger Zelazny’s Amber Chronicles, The Dark Half by Stephen King, and Interview with the Vampire by Anne Rice.
? What is the first book you remember reading by yourself?
My father taught me how to read at the age of five, so I cannot recall which books I was reading. (I think The Berenstain Bears were among the list.) The first book which inspired me to write was The Phantom Tollbooth.
? What are you reading right now?
I have been working through The Name of the Wind by Patrick Rothfuss, American Gods by Neil Gaiman, and Wizard’s First Rule by Terry Goodkind.
? What do you like to do when you are not writing?
I like to play Dungeons & Dragons and World of Warcraft to unwind. Thank you, Wil Wheaton, for making nerdiness sexy again. ;)
? What is your favorite comfort food?
Anything involving bacon, cheese, and potatoes. Preferably a combination of the three. Add some gravy and I am in nirvana.
? What do you think makes a good story?
Passion and heart. Blood and guts. Bits and pieces of your soul chipped from the source and wheeled with loving care to the refinery of the printed page. Real people. Extraordinary things. Rising above and sinking below. The human condition in all its brutal honesty, punctuated with the hope that none of us are damned to become anything but what we choose to be.
? Who would you consider your favorite author and why?
Growing up: Stephen King. He brought the monsters out of the closet and taught us all how to defeat them. Now: Neil Gaiman. He inspires me toward a level of writing I will probably never achieve this side of heaven. That does not stop me from trying.
? What book, if any, do you read over and over again?
There is not any one book I read over and over again. There are books I absolutely need on my shelf, though. (See the list of books which have influenced my life.) Having them there is like having an old friend along for the journey. Every now and then, we sit and have a chat, but sometimes it is enough to look over their way and exchange a smile with them.
Fun random questions:
I am a dog person in the unfortunate position of owning cats. They at least never hold it against me… much.
Either. Or both. I lean more toward coffee.
Dark chocolate is the ambrosia of the gods.
Flowers. Rocks are agents of destruction. Flowers are evidence of creation.
Definitely night. I am very nocturnal. The fact that the real world forces me to be awake and active during daylight hours is the bane of my existence.
Black is my favorite absence of color. ;)
Otherwise, red.
Give me a pack of crayons and I am instantly seven years old again. They are bliss.
Pens. Black. With college-ruled notebook paper and an idea begging to be written.
Thank you Peter Dawes for sharing a bit of yourself.
Now...on to the book ~ Eyes of the Seer.

It all started with a murder. Two victims lay dead at the hands of Peter Dawes, but what laid in wait for him was not the sound of sirens or the banging of a gavel. It would turn a doctor into a killer and a man into a monster.
Follow Peter as he exchanges his blood-stained clothing for tailored suits, his scalpel for fine-crafted daggers, and is reinvented as the newest vampire-child in a coven of decadent sophisticates. He even takes on the name ‘Flynn’ – a child of red – in honor of his new-found devilish side and to further distance himself from his human past.
For four years, Flynn embodies every bit the bloody immortal he was sired to become. Under the reign of his maker, Sabrina, he establishes a reputation as the most feared assassin to ever terrorize the covens of . But the surefooted-steps and quick hands that make him a virtuoso when it comes to killing humans and vampires alike are attributes of the mortal destiny which haunts him even beyond death. And despite all efforts, Peter’s humanity is not as dead as some would prefer.
On the verge of completing their vie for power, Sabrina’s ‘dark-killer’ will suddenly find himself wrestling his devotion to his mistress when an impish sorceress named Monica awakens the hidden powers he was destined to possess. In this world of macabre and shrewdly practical immortal beings, will Flynn’s supernatural gifts be used to orchestrate the wicked deeds of his maker? Or can the cold-blooded nature of a vampire be warmed by the compassion of a Seer?
EYES OF THE SEER is a gripping tale conspicuously authored by Peter Dawes – years later, he’s decided to put the story of his life to paper, albeit listed as ‘fiction’. (Vampires can’t really claim to exist, after all. It would ruin the whole gig.)
More About the Author:
Peter Dawes is an author of urban fantasy, native to the area. The stories he writes often focus on the paranormal, with real life people being thrown into extraordinary circumstances. The clash of good vs evil and hero vs villain is a staple of his work, though he is never content to leave the hero unscathed by the end of the day. There is always a trial experienced and a lesson learned, even if it's learned the hard way. Far from being an archetypal author, though, Peter Dawes recognizes that what is black and white is often painted with shades of gray and even the heroes fall while the villains rise above. To Peter, the classic struggle epitomizes something within all of us that digs deep for the last mile, doggedly holds on to love, and sometimes ignores the safe path for the road less traveled. He also may or may not be a vampire. He leaves that for the reader to determine.
Website: http://crimsonmelodies.com
Twitter https://twitter.com/#!/poeticimmortal
Facebook http://www.facebook.com/EyesOfTheSeer
Facebook http://www.facebook.com/CrimsonMelodies
Thanks for stopping by The Wormhole.
Happy Reading.
Posted by Beverly at 5:00 AM 0 comments