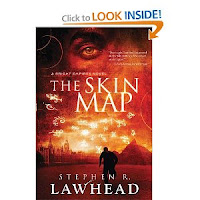 Amazon Product Description:
It is the ultimate quest for the ultimate treasure. Chasing a map tattooed on human skin. Across an omniverse of intersecting realities. To unravel the future of the future.
Kit Livingstone’s great-grandfather appears to him in a deserted alley during a tumultuous storm. He reveals an unbelievable story: that the ley lines throughout Britain are not merely the stuff of legend or the weekend hobby of deluded cranks, but pathways to other worlds. To those who know how to use them, they grant the ability to travel the multi-layered universe of which we ordinarily inhabit only a tiny part.
One explorer knew more than most. Braving every danger, he toured both time and space on voyages of heroic discovery. Ever on his guard and fearful of becoming lost in the cosmos, he developed an intricate code—a roadmap of symbols—that he tattooed onto his own body. This Skin Map has since been lost in time. Now the race is on to recover all the pieces and discover its secrets.
But the Skin Map itself is not the ultimate goal. It is merely the beginning of a vast and marvelous quest for a prize beyond imagining.

(I received this book from the author in exchange for an honest review).

My thoughts:
I wasn't sure what to think of this book as I started it.  I had not read the jacket of the book or the Amazon blurb listed above and was going into it blind.  I was pleasantly surprised.
This is a complex story of multi-dimentional time travel, alternate realities, and magic.  The characters are wonderfully ordinary and yet extraordinary at the same time.  Each seeming to discover themselves and their strengths by the sheer need to adapt and survive.
I enjoyed the story and the characters.  I would say that Mina was my favorite, even though I disliked her at the start of the book - she proved to be more than she appeared as the story built, but each of the characters held their own.
The plot is many layered and complex, certainly not a light read when you have ten minutes to kill.  It is well worth the time spent.  It is packed with action, intrigue, deception, and wonder.
Although I liked the characters and thrilled in the complexity of the book, I was left feeling that it didn't finish.  I see that it is a series, but would have liked a bit more closure.  I felt that such a story, and the characters within, deserved a bit more from the ending.