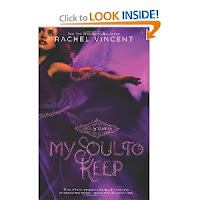 Check out the trailer for the newest Rachel Vincent YA - Soul Screamers #3 - My Soul to Keep. http://www.youtube.com/watch?v=90a670nkVak&feature=player_embedded

Check out the contest here!
Posted by Beverly at 10:51 PM 1 comments

Teaser Tuesday is hosted by Miz B at Should Be Reading.

My teaser this from page 1 of Touch of Dark by Karen Chance.

"I knew I was in trouble as soon as I saw the obituary.  The fact that it had my name on it was sort of a clue."

The Literary Road Trip is hosted at Jen's Bookshelves.  I am sharing Minnesota authors!  I am starting out my leg of the journey with Lois McMaster-Bujold.  You can check out her blog here.

I chose to start out this road trip with Lois because I have had the pleasure of meeting her a few times.  I have been fortunate enough to be able to not only attend book signings, but also dinners with Lois McMaster-Bujold and a group of her fans.

Lois McMaster-Bujold was born in Ohio, but now resides in Minnesota.  She writes science fiction and fantasy.  She is one of the most acclaimed writers in her field.  She won the Hugo Award for best novel four times. Her novella "The Mountains of Mourning" won both the Hugo and Nebula Award. The Curse of Chalion won the Mythopoeic Award for Adult Literature and was nominated for the 2002 World Fantasy Award for best novel, and both her fourth Hugo and second Nebula were for Paladin of Souls.

You can check out a list of all of her books and awards at Fantastic Fiction.
Posted by Beverly at 3:58 PM 1 comments