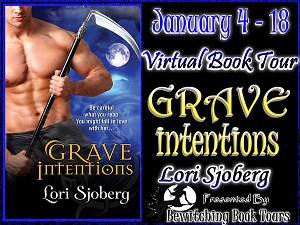 This blog tour is presented by Bewitching Book Tours.
Click HERE for more tour information.
Welcome to The Wormhole and my day on the tour.
It is my pleasure to feature:
Lori Sjoberg and Grave Intentions.

Lori has joined us for an interview:
? When did you first realize you wanted to be a writer?  It all started with my addiction to the Stephanie Plum books by Janet Evanovich.  When I ran out of books to read, (at the time, it was To the Nines) I turned to the wonderful world of fan fiction.  Unfortunately, there wasn’t much Morelli-based fan fiction, so I started writing short stories of my own.  Gradually, those stories became longer and longer, until the day came when I wanted to create my own world and characters.

? How many jobs did you have before you became a writer?  Six:  Flea market vendor, restaurant worker, retail manager, officer manager, financial analyst, and insurance account manager.

? How long does it take you to write a book?  It varies, depending on the length.  At the moment, I’m averaging between six months to a year for a full-length manuscript.

? What would you say is your most interesting writing quirk?  I keep a spiral notebook so I can scribble notes whenever ideas pop into my head.  It comes in handy when I don’t have access to my laptop!

? Do you have a routine that you use to get into the right frame of mind to write?  If I have the time, (and if weather permits) I like to take a long walk with my dog prior to writing.  Walking helps clear my mind and focus on my work in progress.

? Where do you get your ideas or inspiration for your characters?  Oh, they come from all over the place.  Sometimes they stem from current events, while others spring from life experiences.  I got the idea for my current work-in-progress while on a Caribbean cruise with my husband.

? How do you decide what you want to write about?  Usually, I follow the direction of my muse.  Once an idea pops into my head, I’ll mentally build a cast of characters around it until I have enough material to start writing.

? What books have most influenced your life?  It’s so hard to narrow it down to just a few!  The works of Edgar Allen Poe and J.R.R. Tolkien definitely had an early influence.  More recent ones include Outlander by Diana Gabaldon, One For the Money by Janet Evanovich, Bet Me by Jennifer Crusie, Naked In Death by J.D. Robb, and On A Pale Horse by Piers Anthony.

? What is the first book you remember reading by yourself?  Where the Wild Things Are by Maurice Sendak

? What are you reading right now?  A Taste of Ice by Hanna Martine
? What do you like to do when you are not writing?  I love to travel.  The opportunity doesn’t present itself as often as I like, but when it does my bags are packed so fast it’ll make your head spin!

? What is your favorite comfort food?  Macaroni and cheese.

? What do you think makes a good story?  Compelling, realistic, three-dimensional characters.  If the reader doesn’t care about the characters or find them believable, then they won’t care about what happens to them.

? Who would you consider your favorite author and why?  Diana Gabaldon, because her stories pull me in so completely I’ll skip meals and stay up way too late to read her novels.  Heck, I’ve even taken time off work so I can buy her books first thing on release day, and then spend the rest of the day curled up on the couch reading!

? What book, if any, do you read over and over again?  I’ve lost count of the number of times I’ve read Outlander by Diana Gabaldon.  It has it all: humor, romance, action, intrigue, time travel, and some of the most compelling characters I’ve ever encountered.  If I’m feeling down, One For the Money by Janet Evanovich never fails to brighten my spirits and make me laugh.


More About the Author:
Growing up the youngest of three girls, Lori never had control of the remote. (Not that she’s bitter about that. Really. Okay, maybe a little, but it’s not like she’s scarred for life or anything.) That meant a steady diet of science fiction and fantasy. Star Trek, Star Wars, Twilight Zone, Outer Limits – you name it, she watched it. It fed her imagination, and that came in handy when the hormones kicked in and she needed a creative excuse for staying out past curfew.

After graduating from the University of Central Florida with a Bachelor of Science, Lori worked for nearly a decade in retail management. When that got boring, she switched to financial planning, and then insurance. The writing bug bit a few years later. After completing her first manuscript, she joined the Romance Writers of America and Central Florida Romance Writers. Now she exercises the analytical half of her brain at work, and the creative half writing paranormal romance. When she’s not doing either one of those, she’s usually spending time with her husband and children of the four-legged variety.

He's handsome, reliable, and punctual-the perfect gentleman when you want him to be. But this dream man is Death's best agent-and now he's got more than his soul to lose . . .

One act of mercy before dying was all it took to turn soldier David Anderson into a reaper-an immortal who guides souls-of-untimely-death into the afterlife. But the closer he gets to atoning for his mortal sin and finally escaping merciless Fate, the more he feels his own humanity slipping away for good.

Until he encounters Sarah Griffith. This skeptical scientist can't be influenced by his powers-even though she has an unsuspected talent for sensing the dead. And her honesty and irreverent sense of humor reignite his reason for living-and a passion he can't afford to feel. Now Fate has summoned David to make a devastating last harvest. And he'll break every hellishly-strict netherworld rule to save Sarah...and gamble on a choice even an immortal can't win.

My thoughts:
I truly enjoyed this book.   Original and well-written, this is one you don't want to miss out on if you enjoy a paranormal romance.  The characters are fantastic.  I fell in love with David first, then all the rest.  The world they live in is realistic and the storyline is intriguing as well as original.  The relationships between the characters are well done and heartfelt.  The "twist" of fate is unexpected and the ending, although satisfying, leaves you wanting MORE!