Blog Tour: The Next Thing I Knew by John Corwin (Giveaway too!) 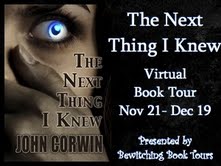 This virtual book tour is presented by Bewitching Book Tours!
You can see the entire tour schedule by clicking HERE.
Welcome to The Wormhole and my day on the tour!
Please welcome John Corwin!

John Corwin has been making stuff up all his life. As a child he would tell his sisters he was an alien clone of himself and would eat tree bark to prove it.
In middle school, John started writing for realz. He wrote short stories about Fargo McGronsky, a young boy with anger management issues whose dog, Noodles, had been hit by a car. The violent stories were met with loud acclaim from classmates and a great gnashing of teeth by his English teacher.
Years later, after college and successful stints as a plastic food wrap repairman and a toe model for GQ, John once again decided to put his overactive imagination to paper for the world to share and became an author. 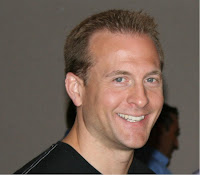 Guest post from John himself:
The Writing Process
I established in another article that the reason I write is to fulfill my need for world domination and control the fate of the universe, even if it's a pretend one.  But I'm pretty sure that my millions of loyal fans also want to know how I write.  Unfortunately, my spam filter weeds out the vast majority of fan emails so I tend to extrapolate from one or two emails what the rest of my massive loyal fan base wants to know about dear old moi.
Everywhere I read about writing methods it's always the Planners versus the Pantsers.
Planners, obviously, are those anally-retentive types who write an outline, sketch out the details of the book, and then flesh in the skeleton from there.
Pantsers are the ones who think, "It would be so totally sweet to write a book about a girl who can walk on her hands and clap her feet together at the same time!"  And then they write the book without planning it much more than that.
I've written using both methods.  One thing I discovered from both is that while planning does have the advantage of giving you some direction, by the time you've hit a hundred pages, you'll find the characters have decided to take things another direction.
"Which is why I'm totally gonna pants my story about Sally, the hand-walking, foot-clapping wonder girl!" you may shout in glee as you prematurely celebrate your victory over the evil planners.
By the time I starting writing The Next Thing I Knew, I decided it was time for a new action plan.  So I did something that I'm pretty sure nobody has ever done:  I combined methods.  Before you collapse from the sheer genius I've just displayed, let me explain.  And then you may collapse.
First, I write out a premise.  Second, I sketch out an entire synopsis that tells the story from beginning to end.  Third, I write a one-sentence description for each of the first few chapters.  For example:
Chapter 1 – Jimmy finds a rock, glues beady eyes on it, and names it Gunther T. Higgins but discovers that Billy's pet rock already has the same name.
Chapter 2 – Billy wants to fight Jimmy to determine who gets to keep the name Gunther T. Higgins for their rock.
Chapter 3 – The rocks come to life, reveal themselves as aliens from , and judge the human species as terrible pet rock owners.
Chapter 4 – The world is taken over by alien space rocks.
After that, I write the chapters without planning out every single detail.  For the most part it seems to work although the editing phase brings new challenges.  By the way, I've already patented my new method under the name Plantsing.  If anyone tries to steal this idea, alien space rocks will pay you a visit!
Now that I've revealed the genius behind my madness…or something like that, how would you write a book?
Thanks for having me!

The Next Thing I Knew
By John Corwin
Humanity is extinct
When Lucy Morgan drops dead along with everyone else on Earth she refuses to take death lying down even if, technically, her corpse is.

She drags her ghostly social life back from the grave and enlists her friends to figure out the rules of the afterlife. More importantly, they want to discover who or what killed everyone and why the heck anyone would do such a mean thing.

But what they discover changes everything. And if they can't figure out how to put their newfound ghostly powers to work, humanity will be extinct for good.


Thanks for stopping by The Wormhole!
Good luck in the drawing ~ Happy Reading!
Posted by Beverly at 5:00 AM 1 comments

Review: Christmas with a Vampire

Christmas with a Vampire:

Amazon Product Description:
Prepare for an exhilarating journey across the boundary of death into a shadowy, daring new world. As darkness falls on another year, five fanged rebels are ready to celebrate like never before.

It's a time for bloodlust and stolen kisses, for clandestine bites and forming new bonds beneath the mistletoe. Succumb to the forbidden as these powerful vampires give you a Christmas you'll never forget….
My thoughts:
This was a great read!  I enjoyed each story very much.  I found myself falling in love with the characters from the start of each new story.  I kept thinking, "Oooh, this one is my favorite!" and then I would turn to the next one, fall in love with those characters and think that about that again.
I love vampire stories but had never read anything by any of these authors so I was excited to read "new to me" authors.  (I am still trying to decide who I think is on the cover).  Each short story is an original, fairly powerful love story and are all well written.

A Christmas Kiss by Merline Lovelace: Great characters, twisty plot.
The Vampire Who Stole Christmas by Lori Devoti: Super great characters! Multifaceted theme - revenge, need, desire, self worth and the meaning of love.
Sundown by Linda Winstead Jones: Great characters.  Connected with Abby (I've worked in the bar industry for over 20 years!) and fell in love with Leo.  New spin on vampire powers that was refreshing.
Nothing Says Christmas Like a Vampire by Lisa Childs: Super story.  This one had me from the go.  Intriguing family ties, great characters and the invincibility of true love.  Don't miss it.
Unwrapped by Bonnie Vanak: Wonderful characters, new look at the vampire/werewolf battle.  Long lost love, opposing families, treachery, hope...it's all here.  (and I LOVE the ugly doll bit!)
A must read for vampire fans!
Posted by Beverly at 2:04 AM 0 comments

Once again I have been MIA for a few days - Sorry!

The Chosen by Sheenah Freitas: sammykeyes1!

I will be emailing all of you shortly!  Congratulations and thanks to everyone who entered all these giveaways!
Posted by Beverly at 12:53 AM 1 comments