My secret: How I gave birth to Tiina by Laxmi Hariharan

The unerring precision of being caught in that act by him sends goose pimples up her arms. She plays it out in her mind, examining it from different angles.
These were the first lines I wrote for The Destiny of Shaitan. It was 2004. Wanderlust had led me to Hong Kong, where I lived in a tiny four-hundred-square-feet apartment (I kid you not! If you have seen pictures of the high-rises smothering the Hong Kong skyline, well I share a secret—they are all apartment blocks. I lived on the eighteenth floor of one such tower.) “Eighteen—lucky number,” the landlord had reassured me, as apparently, was the street address—Eight Hollywood Road. The belief in numerology runs deep in the Orient, with local businessmen shelling out millions of dollars for a car license plate which bears the number Eight.
But I digress, for I am here to share my secret with you.
One afternoon I was walking down Hollywood Road, wearing my favourite pair of thin cotton cut-off trousers, and a baby-T-shirt. In that eighty-degrees-heat the less one wore the better, and I had learnt very quickly that even wearing jeans felt claustrophobic in that climate. Cotton was best, to keep the skin ventilated. Rain had started pattering down, and a slight breeze rising from the sea crept up, enveloping me in its cooling embrace before fading away. I raised my eyes in delight and put out my hand to catch the drops of calm in the palm of my hand. “Thank you, one above!” My phone rang just then, startling me out of my dialogue with the greater force of nature.
“Enjoying your walk?” It was the man I had met last night at the salsa bar. Hong Kong—believe it or not—is a salsa hotspot, and most nights I managed to make it to the gym and then onto a salsa class to give myself over to the rhythm of my heart and the pure enjoyment of becoming one with the music. I was a novice and he was obviously a seasoned dancer. I was flattered by his attentions, and for the rest of the evening we twirled, sashayed and swayed together.
Seemed he was in the bus that had just gone by and seen me. “I saw you talking to yourself” he told me that night. I blushed, wondering why it felt like he had caught me in the act of making love to myself. Perhaps because at that very moment I had been one with the universe, in a very private place, wearing my heart on my sleeve and he had seen a vulnerable side to me that I had kept to myself so far?
There are no coincidences. So what was this? All it had been was an emotional exchange, yet the attraction felt wrong, it felt as if coming from a wellspring of hope which I had not known existed within me.
A gaze, lust. A touch, sizzle. A beat of music, caress. A drop in time, like the rain which chattered down while I had looked up and floated away. Why did it feel so wrong, as if I was cheating on my boyfriend of that time? When all I had done was look into his eyes and felt a connection? 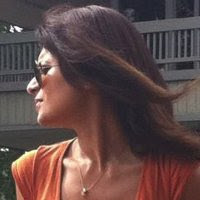 About Laxmi Hariharan: I am a writer, technophile & dare I say, a futurist, with a penchant for chai and growing eye-catching flowers. Wanderlust drove me out of my home country India and I travelled across Asia, living in Singapore and Hong Kong before coming home to London. I am inspired by Indian mythology; I draw strength from the stories my grandmother narrated to me as a child. It is in acknowledging my roots that I found my voice. When not writing I love walking in the woods with my soulmate, and indulging my inner geek.
I would love to connect with you on Twitter, Facebook, Pinterest or my website.

The Destiny of Shaitan by Laxmi Hariharan

Amazon Product Description:
Epic fantasy kindle bestseller, "The Destiny of Shaitan is mind-blowing, dark, humorous, and clever. It took me on a powerful journey inwards, which was a surprise, as I'm not generally drawn to Sci-Fi or Fantasy. I love the scene where the planet is covered with water and Yudi rescues Tiina. It's core message is unity. I believe it will appeal to people across all ages." - Sonia Ducie Dip.CSN.AIN, Numerologist, Author of eleven Numerology books.Inspired by Indian mythology and partially set in a futuristic Bombay, The Destiny of Shaitan is a coming of age story, painted against the backdrop of a post-apocalyptic world. When Tiina accompanies Yudi on a mission to save the universe from the ruthless Shaitan, she seeks more than the end of the tyrant; she seeks herself. Driven by greed and fear for his own survival, Shaitan bulldozes his way through the galaxy, destroying everything in his path.  Tiina wants Yudi to destroy Shaitan, thus fulfilling the prophecy of Shaitan being killed by his son. But she finds that Yudi is hesitant to do so. The final showdown between Tiina, Yudi, and Shaitan has unexpected consequences, for Shaitan will do anything in his power to win the fight.  The stakes are high and the combatants determined. Will Shaitan's ultimate destiny be fulfilled?

You can buy a copy of your own by clicking HERE.
Posted by Beverly at 6:00 AM 4 comments 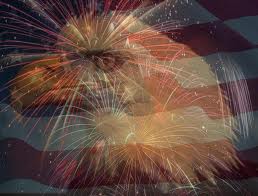 Happy 4th of July!
In appreciation and memory of all those in the armed forces.
Past ~ Present ~ Future
Thank you for your willingness to fight for the freedom of this amazing country.
In loving memory of Val Woolums.
Posted by Beverly at 5:30 AM 0 comments