Welcome to The Wormhole and my stop on the tour.
It is my pleasure to feature C.M. Dahl and Hunting Desire. 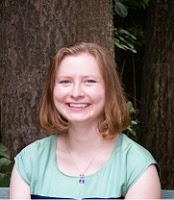 C.M. Dahl has been writing romances since she was eight years old and wrote the story of forbidden love between a stuffed crocodile and a plastic doll in pink magic marker. The crocodile helped the doll cross a dangerous puddle in the backyard and earned the doll's respect. They fell in love after fighting off a legion of green army men.

Her storytelling and her writing tools have grown more sophisticated over the years, but her love for romance has only deepened. She loves writing strong, capable men and women, who have a burning hot attraction between them, learn to respect each other, and fall in love, all while fighting evil and saving the world, of course!

Currently, C.M. writes paranormal romances in the Shattered City series, including Hunting Desire (October 2014), Demon's Dance (November 2014), and Ian & Lilith's story (December 2014). Visit C.M. at her website,www.cmdahl.com, and sign-up for her mailing list to be the first to hear about her new releases here: www.cmdahl.com/mailing-list-sign-up/. 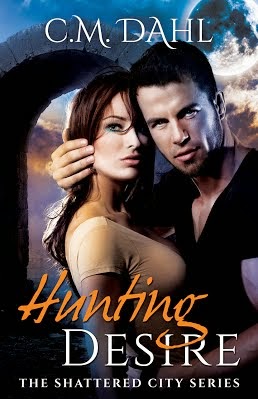 
Date Published: October 23, 2014
Gavin Kincaid and the other Guardians have protected the Shattered City for centuries. But now he faces the one threat even his werewolf strength can't overcome alone: demons are attacking the city from within. His superior calls in elite Hell Hunter Nerine.

Gavin doesn't want outside help. But to his shock, he discovers he wants the beautiful tracker like no other woman he's ever met.

Nerine carries a secret that might just kill her. To protect it, she keeps everyone at arm's length, but her desire for Gavin may make that impossible.

Together, they fight the demons determined to destroy the Shattered City and seize the powerful, mysterious artifacts it holds, until a hidden enemy strikes. Now Nerine must face the demons within her to save Gavin, the city...and the world.

My thoughts:
Great story.  Fantastic characters.  I was intrigued by the beginning and couldn't put the book down by the time I met Nerine.  I fell in love with the characters and was truly thrilled with the originality.  The prejudice against the species was a wonderful play on our own tragic world.  It would be amazing if "real"people could see others for who they are and not judge based on bias.
I enjoyed every page; the growing respect and relationship between Gavin and Nerine was incredible to witness.
The writing is creative, original and clever.  The wording is chosen to bring the reader vivid pictures that run like a movie in the mind while the pages seem to turn themselves.  The story is well paced and entertaining.  The characters are carefully built with a depth that was unexpected.
I can't wait for the next book in the Shattered City series.