Welcome to The Wormhole.
It is my pleasure to feature a guest author:
Maimah Karmo.

About Maimah Karmo, author of Fearless

She had a 3-year-old at the time, and a fiancé, who wound up leaving her weeks before the wedding.

While undergoing chemotherapy, she made a promise to God that if she survived, she would create an organization that would educate, empower, advocate for and support young women affected by breast cancer. After the second round of chemotherapy, Tigerlily Foundation was born, and since then, has sought to provide programs to young women of diverse backgrounds, including those at heightened risk and those with less access to care and to improve the quality of life for young adult breast cancer survivors by creating vigilant self-advocates.

Since starting Tigerlily, Maimah has dedicated her life to helping young women around the world. A sought-after speaker, she has appeared in numerous national print outlets, including O, the Oprah Magazine, Essence, Ladies' Home Journal, Cosmopolitan, Seventeen, Good Housekeeping, Harper’s Bazaar, Marie Claire, and Redbook. She has also been featured on national television, including "The Oprah Winfrey Show," "Good Morning America," FOX, ABC, and CBS.

In 2009, Maimah was awarded a L’Oreal Paris’ Woman of Worth award for her achievements in making a difference in the lives of others, and in 2011, received the Congressional Black Caucus Leadership in Advocacy Award for her work with young women and breast cancer. Later that year, Maimah was appointed to the Federal Advisory Committee on Breast Cancer in Young Women, established by the Affordable Care Act in an effort to increase knowledge of breast health and breast cancer, particularly among women under 40 and those at heightened risk for the disease.

While breast cancer was an unwelcome experience, Maimah would not give back the experience: “I’ve lived more in the past four years than I did the years before," says Maimah. "I'm dedicated to changing the breast cancer landscape and creating a legacy of a world free of breast cancer."

Maimah shares her inspiring story in her upcoming memoir, Fearless: Awakening to My Life's Purpose Through Breast Cancer (Brown Books, October 2012), which she was prompted to write by Oprah Winfrey herself during an appearance on her show in May, 2009.  In it, she shares her struggle and the importance of breast cancer advocacy.

Born in Liberia, Maimah fled to the United States as a refugee with her family at the age of 16. Today,, she resides with her daughter near Washington, D.C., in Reston. Virginia. Learn more at MaimahKarmo.com.

She has joined us today for an interview:


? When did you first realize you wanted to be a writer?
When I was a child. I loved to read and I had so much to say. I would write poems and short stories all the time.

? How many jobs did you have before you became a writer?
OMG. How many jobs did I not have? I have done everything from working in retail to being an administrative assistant, doing various consulting jobs, doing Government contracting, writing resumes, you name it!

? How long does it take you to write a book?
I believe it is different for each writer.  My book began as my journal 6 years ago, but I stopped writing to focus on building my non-profit organization, Tigerlily Foundation, whose mission is to educate, advocate for, empower and support young women – before, during and after breast cancer.

? What would you say is your most interesting writing quirk?
I always have a song in my head, so all of my writing is infused with music or poetry of some kind.

? Do you have a routine that you use to get into the right frame of mind to write?
I would say that I need to just get “that feeling”. Sometimes, I am unable to write for months and then there is that time when I’m just ready and I can just start writing and hammer out chapter after chapter and just get it done.

? Where do you write and how do you write ~ on paper, typewriter or computer?
I write on computer. I take a lot of notes on paper, though and I’m always having thoughts as I’m in the car or doing something and I’ll make notes on sticky paper, or on my phone, then sit down, sort them out and get it all done.

? Where do you get your ideas or inspiration for your characters?
My book is non-fiction, so it is based on my personal story.

? How do you decide what you want to write about?
Right now, it felt like it was time to share my journey, about coming to America as a refugee, losing everything, building my life, getting breast cancer, watching it all fall apart, then finding my true passion.  My next books will be non-fiction as well, but I’d like to highlight some of the challenges women faced and share other stories of inspiration and hope.

? Where does a book start for you ~ characters, plot, ending?
For me, it starts with the plot – even with my own personal story, I had to consider what I would share and how I would share it; then who were the important people in my life that had been a part of my journey, who I want to highlight. The ending for me was the hardest part, but I did not pressure myself, I felt that I had to let it arrive on its own – organically and it did.

? What books have most influenced your life?
The diary of Anne Frank, Annie Proulx, Wayne Dyer, Neale Donald Walsh, and Don Miguel Ruiz.

? What is the first book you remember reading by yourself?
My parents used to order us Childcraft books. They came in sets and would teach everything from geography to what people wore in other cultures. I loved them!

? What are you reading right now?
LOL! Well, I am reading four books at a time.  Three of my good friends, Mali Phonpadith, Misti Burmeister and KK Anadu, all published books this year, so I’m reading them as well as a book on gratitude.

? What do you like to do when you are not writing?
I love to enjoy my life. I have a full life with events, friends, my daughter, my work and so many people I love. I’m never bored!

? What is your favorite comfort food? Oreos or Cheetos!

? What do you think makes a good story? Having rich characters with depth to them, is very important.

? Who would you consider your favorite author and why?
I don’t know that I have a favorite author per se, but I would say that The Diary of Anne Frank had a huge impact on me, because, as a refugee, I identified with losing the things that were “important”, but being able to find joy in where I was and create adventure in a time and place where I was still finding myself.

? What book, if any, do you read over and over again? That’s a tough question.  There are so many books that make up the mosaic of my life. I would say books by the authors I listed above. 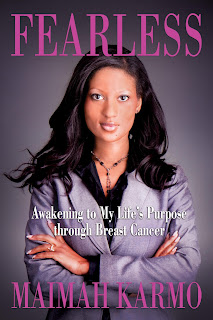