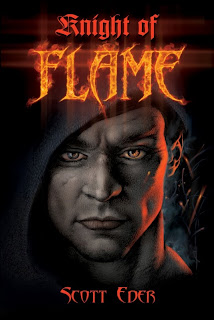 This blog tour is presented by Pump Up Your Book.
Click Here for more information.
Welcome to The Wormhole and my stop on the tour.
It is my pleasure to feature Scott Eder and his book
Knight of Flame. 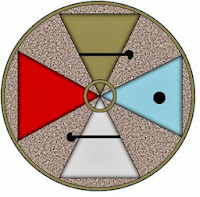 About the Author:
Since he was a kid, Scott wanted to be an author and explored many genres through high school and college. Fantasy, though, captivated his soul. Tales of Knights and magic, dragons and elves filled his dreams. After greasing the gears of the corporate machine for many years, he escaped the Information Technology vortex to focus full-time on writing. The stories he’d envisioned years ago—of nobility and strife, honor and chaos—demanded they be brought to life.

Scott lives with his wife, two children, and a giant Chihuahua on the west coast of Florida.

Fire. The most chaotic of the primal elements. When wielded properly by the Knight of Flame, it burns like the sun. Otherwise, it slowly consumes the Knight, burning away his control, driving him towards dark deeds.

Stationed in Tampa, FL, Develore Quinteele, sixth Knight of Flame, waits impatiently for the predicted emergence of the last Gray Lord, his Order’s ancient enemy. Hampered by a centuries-old tragedy, Dev knows of only one way to control his elemental power—rage. It broils just below his surface, waiting for the slightest provocation to set it alight.
Anticipating Dev’s transition from asset to liability, his commander assigns a young guardian, Wren, to report on Dev’s actions. Torn between duty and love, Wren struggles to save her Knight; but, after a brutal attack by the Gray Lord’s minions for which Dev is wrongly blamed, he’s stripped of his freedom until he regains control.

With the help of his fellow Knights, can Dev regain his balance and unlock his full elemental potential in time to prevent the destruction of all life in Tampa?

Knights don't dance, thought Develor Quinteele.  Knuckles white, he wrung the leather-wrapped steering wheel and swallowed hard.  The muted roar of the rented Jag's high-performance engine and smooth-as-silk ride did nothing to dispel his apprehension.  Wren could have picked anything, but she chose dancing.  He jammed a finger under the rigid collar of his first modern suit and yanked it away from his skin.

Dev stretched to adjust the rear-view mirror and ripped the seam of his jacket.  Armani stretch wool, my ass.  A growl rumbled in his chest and he glared at Wren, but she seemed oblivious to his distress.

"How much farther?"  Wren's excitement tumbled out with each word.  The sun's last rays reflected off the silver sequins of her micro-dress, sparkling across the car's dark chocolate interior.  She shifted position, adjusted her dress, and crossed her legs.  Despite her fidgeting, her
head remained still, focused on the distant horizon, straining to get her first look at Club Mastodon.

Dev smiled through his growing unease.  Though somewhere in her early twenties, Wren reminded him of a small child driving up to the gates of Disney World for the first time.  Her usually tense and critical Asian features, soft, eager and innocent.  Seeing her excitement helped steady his nerves…a little.

"Just a few more minutes.  You know I'm missing a 'Three Stooges' marathon for this, don't you?"  Dev checked his mirrors, vision in constant motion, and raked the hair out of his eyes.  The thin, wavy strands felt foreign to his calloused fingers.  He couldn't remember the last time he had more than a dark prickly shadow on top of his head, let alone mussed brown locks.

With a careless wave of his hand, he grazed the new bruise over his left eye.  Damn, forgot about that.  He prodded the tender skin, trying to gauge the size of the purpling evidence.  So far, he'd managed to keep his fights at work from Wren.  If she found out, he'd never hear the end of it.  The last time she went on and on about him being reckless and not following Stillman's order to keep a low profile.  Whatever.  He brushed his hair forward, trying to cover the injured area, and hoped for the best.

"Mmhm."  Wren's arm shot out, pointed ahead and to the right.  "There it is."  The rest of her words blurred together, "I can't believe you got us on the list.  I mean, like, I've never been to a place like this."  She turned her sparkling green eyes on Dev.  "Do you think a lot of movie stars will be here?"

"Breathe, Wren."  Dev took the exit off I-275 south, just in sight of the Sunshine Skyway Bridge, and stopped at the traffic light across from the club.  When Club Mastodon first opened he'd read about the local business leaders raising an uproar over how quickly the permits, zoning   and associated building minutia were pushed through.  But, when the club was bank-rolled by Alexander Gray, one of the head honchos at Daegon Gray, the normal red-tape covered bullshit disappeared.