Blog Tour: What Happens in Venice by Diana Cachey

Diana Cachey is a licensed attorney, published academic, and former adjunct law professor. She also holds a BA in English, and while in law school, she was the first female editor-in-chief of her university's law review.

The author of the novels Love Spirits and Lagoon Lure, Cachey trained with several New York Times best-selling writers whose sales total more than 70 million books. She has built a social media platform with over one hundred thousand Twitter users, and her popular YouTube channel featuring secret Venice locations has received over five hundred thousand views.

For more than a decade, Cachey has traveled to Venice, the setting of her novels, on extended trips several times a year. The cafés, restaurants, and many other haunts of Venice play a prominent role in her sexy paranormal mystery-romance series about a beautiful American lawyer guided by the Ghosts of Venice in the investigation of a hushed-up crime.

Love Spirits
What Happens In Venice: Book One
Diana Cachey

Tagline: Among the romantic canals of Venice—and oh so many Italian distractions—can a stunning American lawyer and her psychic sister help the Ghosts of Venice solve a hushed-up crime?

Louisa Mangotti is a gorgeous American lawyer and Interpol expert who, after being offered a job working with the international crime unit in Venice, receives a mysterious postcard from the Venetian Ghosts, the ancient protectors of the Republic. But Louisa assumes her bad-boy ex, Matteo, sent it in a quixotic attempt to gain her attention.  Louisa may have dismissed the ghosts, but the ghosts aren’t quite done with her.

When the bodies of two glassmakers wash up on Murano Island, the cryptic messages persist. Reluctantly, Louisa calls upon Matteo to help decipher the clues. And before she knows it, a flame that was never fully extinguished is rekindled.  Sensing that her sister is in over her head, Barbara Mangotti rushes to the rescue, only to be lured away by two handsome Venetian men.

With time running out, can the two beauties solve a crime that could threaten the city of Venice itself?

Excerpt:
From the Top of Our Great Bell Tower Saint Mark Square Venice, Italy
Dear wide-eyed tourist, Don’t go to Venice.
But if you do, don’t fall in -- in a canal, in love or into Venice itself. As if you have a choice. Hear us cackling?
Listen. We came to warn you about La Serenissima, the Most Serene One, as Venice has been called since before the Middle Ages. You will not heed our warning and you will come looking for us. How do we know? It happens every time a Venetian ghost story is told.
As ancient protectors of the Venetian republic, we ghosts guard her virtues of which she has many. One reason we love her, and you will too, is that she is stuck in time. Did you know Venice functions without motorcars or trucks? We don’t like motorcars or trucks. Hundreds of tiny islands sewn together by foot bridges leaves no need for noisy, fume-spewing vehicles, thankfully.
We prefer floating.
Our classic transport is the gondola. Mostly reserved for you tourists now, gondolas are and always have been helmed by the most prestigious oarsmen in the world -- highly trained gondoliers who stand while rowing through the labyrinth of canals. They don’t mind when we ride with or without you while they serenade us with opera, Frank Sinatra songs and romantic favorites.
Ah yes, romance. As one visitor put it, “It’s their schtick, a Venetian ploy, an act to get sexy with you.” It is true. Venice equals romance equals sex.
If the shadows of Venice frighten you or you feel like you’re in a dream, have fun with it, float with us. We are watching over you. We want to further your journey to a more magical life because we think a person is charmed by a trip to La Serenissima.
It could change your soul forever. Just ignore this cautionary tale.  We remain in your service, The Venetian Ghosts

As Interpol expert Louisa Mangotti is learning, ghosts watch over . Can she trust them—or her ex-lover—when spirits offer confusing clues to solve a double murder in this sexy paranormal mystery?

Still unnerved by the notion that Venetian ghosts are real, Louisa delves further into the deaths of two glassmakers while juggling the lustful manipulations of her ex-lover, Matteo, whose role in the murders grows murkier.

When Louisa's best friend, "Rouge," arrives for Carnival to sample its masked men, she complicates the situation further by encouraging the sisters to embrace the pleasures of .

Paranormal clues and apparitions lead Louisa deeper into the lagoon and she is forced to reluctantly enlist Matteo’s support. Can she trust him, or will this ghostly lagoon lure prove deadly?

has its ghosts. They haunt its byways and canals. They linger on its numerous bridges and waft through its beautiful architecture—and they've taken a definite interest in Interpol expert Louisa Mangotti.

In Lagoon Lure, Louisa continues investigating the murder of two glassmakers she began in Love Spirits. Guided by clues sent from otherworldly sources, she struggles to determine what role her seductive ex-lover Matteo played in the deaths, constantly tempted by his handsome looks, his charm, and the volatile chemistry between them.

While Louisa is led by the ghosts to a sunken ship in the murky lagoon, her sister, Barbara, and best friend, "Rouge," embark on their own carnal explorations of , sampling the men who flock to Carnival.

Amid corruption, conspiracy, and 's legendary sexual energy, it's all Louisa can do to think straight, let alone untangle this web of mystery. The ghosts, however, want her to persevere.

EXCERPT:
always delivered. For thousands of years she spread out her bounty for swarms of people who feasted upon her beauty. They stayed in ornate palaces or luxury hotels and paraded in stylish fashions. They admired diverse art, listened to sweet music, sampled delicious food.
They also enjoyed plentiful romantic opportunities.
Ah, the romantic allure of . It continues to this day. Indeed, soon after Barbara’s arrival, offered her no less than three handsome men. Now there stood her sister, Louisa, who begged to hear the dirt on two of them but knew nothing of the third man, the one Barbara wanted most.  She planned to keep him a secret.
Barbara looked around and tried to take it all in, all that had to offer. She saw in front of her a small island, which sat placidly in the lagoon and proudly displayed its huge monastic bell tower. Although a massive presence, this tower was easily dwarfed by the one it faced -- the more famous one -- the one that housed the bells of San Marco. She gazed across the water, let the reflecting sun’s rays warm her face and both Venetian towers began to toll their bells behind her and before her. They echoed across the lagoon, reverberated throughout the tranquil setting. Barbara took note of the bells. She’d been trained by her Italian friends to pay particular attention to what she’d been the thinking in that precise moment these bells began to chime.
She’d been thinking about secrets. That third man. He must remain her secret.
Thus began her diversion, a long philosophical theory about her twin orange cats.
“Back home in ,” she said, “my cats confuse and distract me during morning meditation, just like those two Venetian men did my first night in . The two inquisitive cats circle my cushion then jump on the table where I offer blessings of flowers and candy. They sniff and inspect as if they’ve never seen the ritual before.”
Louisa yawned.
“Those cats seem to see me anew each day, as a thing they need to supervise, approve or inspect. Eventually, they settle nearby to meditate on their own. They observe my struggle to quiet my mind while they remain perfect little meditators. Those two Venetian men were the same. While I was nervous and disquieted, they just purred.”
Louisa frowned.

What Happens In Venice -- A Trinity 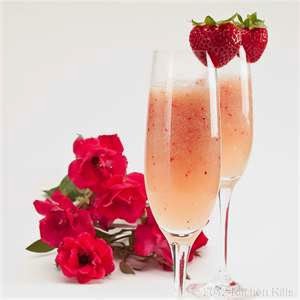 HELLini Cocktail
by Diana Cachey
In , Giuseppe Cipriani  invented the now famous Bellini cocktail, a delicious mix of sparkling wine and peach juice. The fizzy drink started as a seasonal specialty at Harry’s Bar, a historic landmark and favorite Venetian hot spot teaming with tourists and made infamous by celebrities like Ernest Hemingway, Humphrey Bogart, Alfred Hitchcock, Truman Capote, Orson Welles, Aristotle Onassis, Barbara Hutton, Peggy Guggenheim, Woody Allen (the list goes on!)
According to Venetian legend, Cipriani was a bartender at Hotel Europa and a rich American name Harry Pickering frequented the bar. Pickering’s drinking exploits led his family to cut him off financially so Cipriani loaned him 10,000 lire (about $5,000 US). When Pickering returned to the bar two years later, he ordered a drink, repaid the loan and said, “To show my appreciation, here’s 40,000 more, enough to open a bar. We will call it Harry’s Bar.” The bar’s signature drink has a unique pink color that reminded Cipriani of a saint’s toga in a painting by Venetian Giovanni Bellini, so he named the drink after the artist.
The Bellini’s popularity soon took off -- first at Harry’s in Venice then at its New York counterpart and it went viral when a French entrepreneur shipped fresh peach pureé to both locations, making it a year-round hit. Today the Bellini is an IBA Official Cocktail, a well-known drink served by many professional bartenders. People often declare the Bellini the national drink of La Serrenissima, the Venetian republic.
Marinating fresh peaches in wine is an Italian tradition so the drink was made from puréed white peaches and an Italian sparkling wine,  Prosecco. The original recipe added raspberry or cherry juice to give the drink a pink glow. Other fruits can be substituted for peaches and, for a non-alcoholic version, use sparkling juice or Pelligrino in place of champagne.
Our Fang-tastic HELLini variation is made more devilish because it is spiked with peach schnappes and a dash of brandy on top, which is lit and served flaming. It is sparked further with grenadine to effect an amber glow. A proper HELLini should brandish a black licorice gum drop, sliced lengthwise and placed on the side of the glass, where a peach-slice would go on the mere mortal Bellini.
HELLinis should preferably be served in the most expensive hand-blown Murano glass champagne flute that money can buy (that’s very freaky expensive) in the shape of a devil, such as the one pictured here. Each HELLini can be chased by shots of Zambucca in a hand blown snifter, making one feverish enough for a vampire bite.
If you drink more than one and survive the night, you may go to “you-know-where.” Be careful of the things you may see after drinking them.
Bellini Ingredients: Sparkling wine or water, peach juice.
FANGtastic HELLini version: add peach schnapps, dash of brandy. Light on fire. Sip from hand-blown Murano champagne flute. ENJOY! 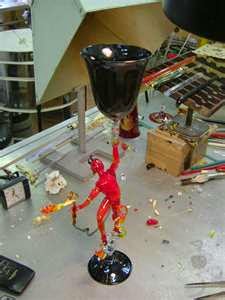