Welcome to The Wormhole!
It is my pleasure to interview Kymber Morgan.
She is a Bandit Creek Author - - - check out her and
so many other great authors at Bandit Creek Books 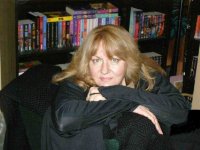 Shafted (Paranormal) – February 1, 2012
Is her love real or just a myth?
Returning to her summertime home of Bandit Creek, Callie Jamison discovers there’s a lot more involved to her grandmother’s legacy than a few cabins and some land, including a curse. The last thing she needs now is to fall in love.
Anteros, dark twin of Eros, is responsible for avenging unrequited love, a job that’s been a lot harder since his brother succumbed to ambro-fever and has been running amok shooting all the wrong people – including Anteros.
The clock is ticking, not only on his immortality and Callie’s free will, but their hearts as well. Soon they’ll each have to decide if the overwhelming attraction they feel is the real deal or if they’ve simply been ‘Shafted’ and it’s all a cruel illusion.
Read the first chapter here.
You can buy a copy of this book by clicking HERE.
Thanks for stopping by The Wormhole.
Happy Reading.
Posted by Beverly at 5:00 AM 0 comments