Congrats Carol T!
You have won an ecopy of Daughter of Deception!
Your information has been sent on and your prize will be sent from the author!
Thanks to all who entered!
Posted by Beverly at 7:35 PM 1 comments

Welcome to The Wormhole and my stop on the tour!
Today I am pleased to introduce 44 and Jools Sinclair. 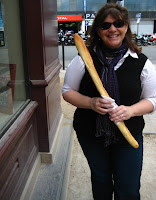 Author Bio
Jools Sinclair lives in . She is an avid reader, movie watcher, orange cat lover, Frye boot wearer and Komodo Dragon coffee drinker. She admits to having an intense passion for opera and loves faraway lands where espresso bars and pastry shops line the streets. Finally, she is absolutely crazy about her family, who in turn thinks she is absolutely crazy.
Jools was kind enough to send us an excerpt:
44  By Jools Sinclair ~~~ PROLOGUE
I know I’m lucky.
Lucky to be alive, lucky to be able to walk again, to inhale the juniper-laced air and watch the soft leaves change into crispy ones scattering in the wind. I can spend afternoons with Jesse as he plummets down the steep hills around town on his skateboard. I can watch Barcelona soccer games on satellite, eat pizza, and even see those dumb reality TV shows late at night.
I’ve been on the other side and I’m grateful that I’m here. My life is good, most days.
But this morning wasn’t like most days.
The wind had a bite and as I stood at the edge of the river, ice pellets drilled into my face. The sky was slab gray, with low clouds pushing down around me.
She was there. Floating under the footbridge, snagged and hidden in bony branches and moving in a subtle, unnatural rhythm that the dead dance to when submerged in water. The river rushed around her, forming small riffles at her feet, as if she had always been there, belonging like a large boulder or a rooted tree.
In my vision the night before, I watched her die. It started soon after I drifted off to sleep. The night was pitchfork-sharp and her fear radiated in waves through me as she ran, trying to get away from him. She slipped, falling hard onto the icy pavement, her screams lost in the hollow, empty night as he wrapped his arm around her neck until she fell quiet into his arms.
These visions that started months ago have me following in the footsteps of a serial killer I’ve yet to see, as he roams the city looking for his next victim, never satisfied and always needing.
I stood in the shadows and watched like it was a scene from a movie. I knew I could do nothing. He picked her up and brought her to the water, held her head down. Then he sat next to her, stroking her hair.
But this time, I was ready. I only needed a glimpse. If I could see his face in my vision, I could find him in reality. I summoned my courage, forced myself to swallow the bile that shot up in the back of my throat and followed him as he strolled arrogantly away.
The moon was bright, beams threading through the trees, leaving thick shadows. Instinctually, I backed into the darkness as he suddenly stopped, even though I knew he wouldn’t be able to see me. His breath leaked out in ghostly wisps as he stood silent.
Finally, he turned around, his eyes hooking into mine. He saw me. Somehow he cut through my murky vision and saw me.
But I saw him too. And now I knew who he was.
He stared a while, still and contemplative, as I fought my urge to run. But he didn’t come after me. The bastard just stood there, and then smiled, before stepping away and disappearing into the lonely night.

You can get your own copy of this amazing (truly - check out my review here) book:
Amazon.com or Barnes and Noble
You can check out the whole tour schedule HERE
Thanks for stopping by The Wormhole!
Be sure to go to the next stop on the tour
(after you grab the book! - it's a great one!)
May 28 - - Christi the Teen Librarian
Posted by Beverly at 7:04 AM 2 comments

*I received this book (digital copy) at no charge in exchange for an honest review and participation in the blog tour.  The blog tour is being hosted by The Bookish Snob Tours.

But she woke into a world she barely recognizes. She can’t see colors, memories have been erased, and her friends all hate her. And then there’s Jesse, who she loves, but who refuses to forgive her the one mistake she made long ago.

Just when she thinks it can’t get any worse, the visions begin. In them, she sees a faceless serial killer roaming the streets. While the police believe that there have been a lot of accidents in town lately, Abby knows differently. And she soon realizes that it’s up to her to find him.

But to stop him, she’ll have to confront more than just the killer. She’ll have to face something else that was lost in those dark waters. The truth.

My thoughts:
Wow! This is a big story hidden inside a short book!!!
I was hooked from the prologue.  Jools Sinclair has created fantastic characters.
This is a thriller/paranormal romance/mystery that keeps you turning the pages as fast as you can read them.  It twists you about and as soon as you think you have it all figured out, throws you for the final loop with an ending that will break the hardest heart.
A must read for certain!!!
Posted by Beverly at 12:14 AM 2 comments