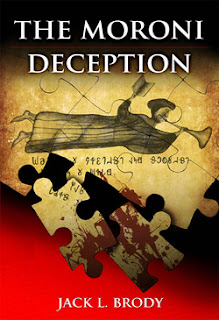 
Identical ritual murders two thousand miles apart.  A missing Mormon relic long thought to be just a myth.  Investigating the connection, what reporter Michael Chenault uncovers may not only determine the next Presidential election, but cause an entire religion to come tumbling down.   If he can stay alive. In the tradition of Brad Meltzer, Dan Brown and Steve Berry, The Moroni Deception is a cleverly conceived, twisting tale of political and religious intrigue by a new master of the conspiracy thriller.

As the thunderous crashing of Lamott’s heavy footsteps got louder and louder as he begin closing in, for the first time in his life the thought crossed Chenault’s mind that this might really be the end. But just then, and from out of nowhere, came the rapid, high-pitched twittering of a bird. Chenault then heard it again, but clearer and even more distinctly, and it really did almost sound like the excited chirping of some exotic songbird--only it was electronic and closing in fast. As he continued to run, his lungs burning more and more with each step, he noticed the chirping along with Lamott’s footsteps getting fainter and fainter. And then he heard Lamott pull up and come to a stop, and the electronic chirping ended. The son of a bitch is taking a phone call!

For good measure, Chenault ran a hundred more yards and pulled up behind the trunk of a massive oak. Heaving his lungs out as he tried to catch his breath, he could feel the rough bark of the tree through his jacket and sweat-drenched shirt as he leaned heavily back against it in his attempt to remain standing. Finally, and he didn't know how many seconds had passed--it might have even been several minutes, but he at last caught his breath and listened carefully, trying to hear something--anything, but all there was now was silence. Could the bastard be headed back for Rachel?

The entire time he and Rachel had been running for their lives, it had never occurred to him to use his cell and dial 9-1-1, and except for the one brief respite earlier, there wouldn’t have been any time anyway. But in a moment of clarity, he whipped his phone out to call Rachel, to tell her that whatever she did to not honk the horn and call attention to herself. As he raced down his phone’s address book for her number, a car horn began honking in the distance, and not just once, but repeatedly, as if the alarm had been set off.

Chenault never would have made for a very good long distance runner--he didn't have the wind for it, and his occasional smoking probably didn't help. He had, however, run the 200 meter sprint in high school and his first year of college, and with his adrenaline once again surging, he sensed he was now running the fastest he had ever run in his life as he headed back toward the parking lot, back to Rachel.

(My thoughts to follow)
Posted by Beverly at 5:00 AM 0 comments