This virtual blog tour is presented by My Addiction is Reading.
Click HERE for more tour information.
Welcome to The Wormhole and my day on the tour.
The author has stopped by for an interview:

Where did you find the inspiration to write The Telepathic Clans Saga?
When I started thinking about what kind of character could be strong, kick-ass, and blatantly sexual while still being one of the good guys.

I started researching paranormal "powers", and managed to put together a coherent list of talents and myths people have envisioned through the centuries. One of the myths I find particularly humorous is that of the succubus. The medieval church used that myth to demonize sexual women. I thought about the idea of a different kind of succubus, a telepath who could drain a man’s life energy, but wasn’t aligned with the devil, and didn’t do him permanent harm.

What do you usually do when you’re not writing?
Right now, I just started a new job and I’m working a lot of hours. That’s why the third book took so long to finish. Over the past four years, I’ve renovated a 100-year-old row house in Baltimore, doing much of the work myself. I like to travel and see new places, hike and ski. My two basset hounds like the hiking part most of all.

Are you working on any new projects at the moment?
I have two projects I’ve started. One is a paranormal mystery/thriller set in the Telepathic Clans’ world with a telepathic s detective. The other is a YA or New Adult paranormal romance in a completely different setting. The main character in that book is a Valkyrie going to university at Oxford. Eventually, I need to write the fourth book to finish Brenna and Rebecca’s story, but I have to get away from that world for awhile. 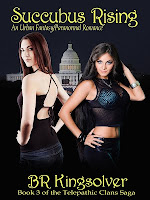 Book Description:
The Goddess has plans for Brenna and Rebecca, and the Goddess has a wicked sense of humor.
Rebecca Healy is a true wilder, growing up with no contact or knowledge of other telepaths. Discovered by a Clan member on the streets of San Francisco, she felt like she’d hit the jackpot. Finally, she knew what she was, or at least she thought she did.

When Brenna O’Donnell, long-lost heir of the O’Donnell Clan, and the strongest telepath in history, is returned to her family, she and Rebecca form a tight bond. Brenna has it all, looks, money, power, and men falling all over her.

Rebecca isn’t jealous, but it would be nice to find someone who would really love her and stick around in the morning. She’s intrigued by a handsome South American general, but of course, he has his sights set on Brenna. Carlos de Vargas wants more than love. His Clan has its back to the wall, and they hope for an alliance with O’Donnell. An alliance that would lead to war.

The story began in The Succubus Gift and continued in Succubus Unleashed. In Succubus Rising, questions are answered and new mysteries are revealed.

Fantastic continuation of the series. The characters that we readers have come to know and love are back again. The plot is clever and have grown even more multi-faceted. You are in for an emotional rollercoaster - and it's moving fast! Can't wait for the next book!
Posted by Beverly at 7:00 AM 0 comments