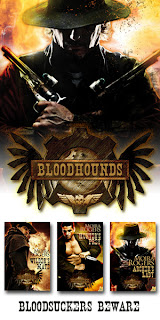 Check out their website by clicking HERE.
The picture is for all of us who love this series - and for those who haven't read these books yet...
An excerpt from Archer's Lady!
Chapter One
It was a crying shame Grace had rediscovered affection just in time for it to be the death of her.
Her mare whinnied nervously, and Grace hurried to stroke a soothing hand down the horse’s neck. No wonder the poor thing was confused. For the third morning running, she’d crept into the stables before dawn and trudged in silence through the laborious task of preparing saddle, tack and bags, only to lose her resolve somewhere between mounting and sneaking away.
If she had a lick of self-preservation, she’d have fled as soon as word came. The town was dying, and one bloodhound wasn’t going to change that. Not when the accursed Guild had taken their time dispatching someone to deal with the vampires whittling the population into nothingness. A smart woman would have taken everything that wasn’t nailed down and fled—weeks ago.
And here she was, stroking Phoebe’s mane as sunlight crept up the far wall of the stable.
She couldn’t leave the people. Not the old men fighting because the young ones were already gone, not the children who were wide-eyed and scared in ways that twisted in her gut, and not Diana. Not the first friend she’d had in years, the woman who’d accepted her…even though she’d seen through all of Grace’s pretty, careful lies.
No, Grace wasn’t going to leave , and it was time to admit it to herself. Smoothing her hand down Phoebe’s back, she reached for the heavy packs, but tensed when hay crackled behind her.
“Your mount won’t be happy with that much weight.”
A stranger’s voice. Low, a little rough. The bloodhound, arriving on schedule, then—or a ghoul sent out by his vampire master to pick off anyone who trusted the dawn.
She turned and knew at once that the man standing before her was no ghoul. Tall and craggy, he looked like a man accustomed to hard living. He wore scuffed leathers and a battered hat pulled down low enough to show only an equally battered nose. His square jaw was covered in a day’s worth of beard, and it made his mirthless smile even more imposing.
A bloodhound, in all his arrogant glory...