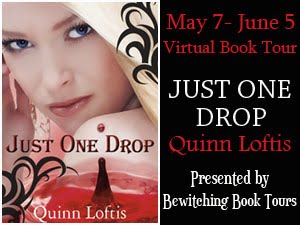 Bewitching Book Tours is presenting this virtual book tour for Quinn Loftis!
You can see the entire tour schedule by clicking HERE.
Please be sure to check this author out!
You can buy her books by clicking HERE. 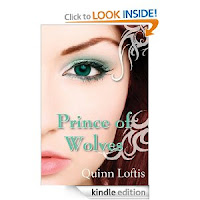 ﻿
Book One: Prince of Wolves
Jacque Pierce was just an ordinary 17 year old girl getting ready to start her senior year in high school in Coldspring, Texas. When a mysterious foreign exchange student from Romania moves in across the street, Jacque and her two best friends, Sally and Jen, don't realize the last two weeks of their summer was going to get a lot more interesting. From the moment Jacque sets eyes on Fane she feels an instant connection, a pull like a moth to a flame. Little does she know that the flame she is drawn to is actually a Canis Lupus, werewolf, and she just happens to be his mate; the other half of his soul. The problem is Fane is not the only wolf in Coldspring, Texas. Just as Fane and Jacque are getting to know each other, another wolf steps out to try and claim Jacque as his mate. Fane will now have to fight for the right to complete the mating bond, something that is his right by birth but is being denied him by a crazed Alpha. Will the love Fane has for Jacque be enough to give him the strength to defeat his enemy, will Jacque accept that she is Fane's mate and complete the bond between them?

My thoughts:  I love this series!  From the very first page I was "IN" - first it was the characters, then the story.  Quinn Loftis has created characters that you want as your own friends and family.I couldn't put it down.   Although this is the first book in the series, I read it second - so I already knew I would love it.  It was fantastic to get the beginning of what I already knew to be a great read with endearing characters, a fast-paced action packed story line and just enough romance! 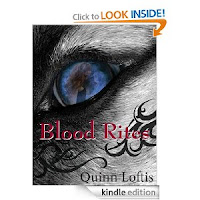 Book two: Blood Rites
With the challenge complete and the corrupt Alpha of Coldspring defeated Fane is now free to complete the mate bond with Jacque and perform the Blood Rites. Although the challenge is done, the affects are far reaching. Once it is known that Vasile one of the strongest Alphas in the world is in America, specifically Coldspring, TX, there is one Alpha who cannot over look the significance of this. An Alpha who happens to share Jacque's DNA, but is this the one she needs to fear?


With her mom driving and her two best friends, Jen and Sally in tow, Jacque set off for her happily ever after. She will soon realize a plan has been put in motion that will change her course and possibly tear her from Fane's grasp forever. It will take a wolf pack, her mother's love, her two best friend's unrelenting determination, her own will to survive and the undying love of her mate to bring her home. The question remains, if she fights, if she endures, who will she be, what will be left once she is back in her mates arms?

Book three: Just One Drop
Jennifer Adams, best friend to Jacque Pierce and Sally Morgan, spicy, out spoken, a little crazy and human...or so she thought. Jen has just found out that human DNA is not the only thing that resides in her veins, she happens to share that little pesky werewolf gene, although it isn't more than just a drop. Now that she and her friends are living in Romania with Fane's pack, she is also oh so conveniently stuck with the object of her affection, the fur ball Decebel. Drawn to each other by something they don't understand Jen finds herself frustrated by the lack of mating signs between her and said fur ball. Not only is she dealing with that not so un-frustrating problem, she now has been informed that because of that little drop of werewolf blood in her she is now required to attended a multi-pack gathering for un-mated wolves. This type of gathering hasn't taken place in over a century but with a shortage of females among the werewolf population the males are getting worried they won't ever find their true mates. Meanwhile Decebel struggles with the emotions he is feeling towards Jen. He tries to keep his distance but there is just something about the mouthy blonde that keeps him coming back for more of her verbal abuse that he just can't seem to get enough of...go figure.

***I have been waiting for this one since I finished Blood Rites!!!
Posted by Beverly at 11:31 AM 1 comments