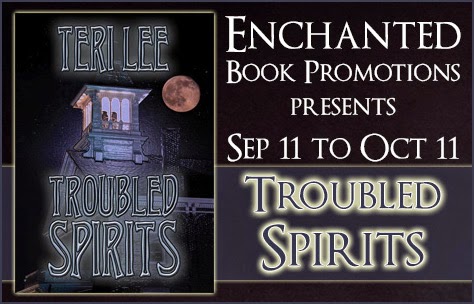 Author Bio
Growing up in Maine, Teri Lee spent most of her time reading and exploring in the woods. And that hasn’t changed. When she’s not writing, you’ll still find her lost in a book or out hiking. And if she’s not there, try the ER. But don’t worry, she’s the nurse, not the patient. Teri has three grown children and still resides in Maine with her husband.

Title: Troubled Spirits
Author: Teri Lee
Genre: YA Paranormal
Ghosts aren’t real.
That’s what Annie Waters believed before she snuck into the abandoned Caldwell School. Before the dark presence followed her home. Before she realized, her only hope was to believe.

Excerpt:
Annie’s nose burned with the smell of gasoline.
“Are you okay?” The voice sounded far away.
There was another sound—closer—a rasping breath. Annie opened her eyes. She was in the car. The side of her face was pressed against the window and something jabbed against her right hip. She shifted.
Everything hurt.
Then it all rushed back to her—the argument with her parents—the bright lights, those were headlights—they’d crashed!
“Mom! Dad!” she screamed.
The rasping sound again. It was coming from the front seat. She tried to lean forward, but her hips were pinned to the seat and something pressed against her chest.
Knock, knock, knock. A man peered down at her through the window of the other door. She realized the car was on its side. “You shouldn’t move,” he said. “I called 911.”
Annie heard sirens in the distance. “Mom! Dad!” She worked her arm into position against the door and pushed. A band tighten across her hips. The seatbelt! Her fingers found the button and the restricting band slid away.
The sirens grew closer. Flashing red lights lit up the inside of the car. Annie could just make out the back of her mother’s head and she saw was blood.
She tried to get to her, but her legs were wedged against the back of her mother’s seat. She wriggled and shifted, ignoring the sharp pains that shot through her legs, until she freed one leg, then the other. She grasped the headrest. Her hand slipped off the warm, slick surface. Even in the dim light she could see it was blood.
“Mom!” she screamed. “Dad!”
Another rasping breath.
A new face appeared in the window above her. “Don’t move. We’re coming in.”
The face disappeared and the car vibrated slightly as metal screeched against metal. Slowly, the top of the car was pried away. Firemen surrounded the car. One of them slid a stiff collar around Annie’s neck while a second checked Dad’s pulse, then shook his head. A tight lump formed in Annie’s throat and she felt her chest caving in. She didn’t dare breathe as she looked over at the fireman working on her mom.
“Pulse is thready.” He slid a collar around her neck. “Let’s get her out of here.”
“Annie! The voice seemed far away.