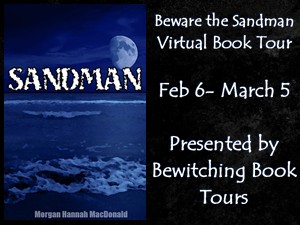 By Morgan Hannah MacDonald
Beware the SANDMAN he’ll put you to sleep. . .forever.
A serial killer on the loose, a woman being stalked, and a homicide detective who must find the connection between the two before she becomes the next victim.
He collects women. He imprisons them, plays with them, tortures them. Until they bore him. Then he removes a souvenir. They call him the Sandman.
Meagan McInnis is being plagued with late night calls, yet when she answers, no one is there. Then one night she makes a grisly discovery in her own backyard.
The caller is silent no more.
Homicide Detective, J.J. Thomas, realizes Meagan is the key to finding the Sandman. Now not only must he protect her, but he must find the connection between Meagan and the killer before she becomes his next victim.
WARNING: SANDMAN is a Romantic Thriller that contains adult language, explicit sex and graphic violence.
More About the Author:
Morgan Hannah MacDonald writes Romantic Thrillers-Not for the faint of heart. She has always been interested in writing and serial killers, but it wasn’t until she found she had dated one herself that a true writer was born. She belongs to Romance Writers of America’s San Diego Chapter, as well as the Kiss of Death Chapter. She resides in San Diego, California where she is busy working on her next novel.
Email:  morganwrites@yahoo.com
Website:  www.morganhannahmacdonald.com
Facebook:  https://www.facebook.com/MorganHannahMacDonald.Author
Posted by Beverly at 5:00 AM 0 comments 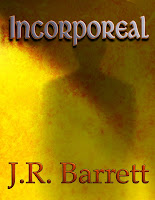 ***I received this book from the author in exchange for an honest review.

Amazon Product Description:
Sara Wise is sick of ghosts. They’ve haunted her since she was a child, destroying her family, endangering her life. When an incorporeal being appears in her shower, she curses him soundly and orders him out, but this ghost is sticky. Not only does he invade her shower, he moves into her home, invading her dreams, sharing her bed. The reluctant Sara finds herself falling in love with a dead man.

Despite Sara’s objections, Natan de Manua isn’t permitted to leave. Protecting the woman is both his penance and his means to redemption. She’s not easy to protect, she fights him nearly every step of the way, except in her bed. Nathan may have come to regain his soul, but instead he risks losing his heart.

My thoughts:
Incorporeal is my first ghost romance and I am thrilled to have had the opportunity to read it.  Wonderful story!  Sweet, romantic, a bit on the spicy side - it has a little bit of everything; mystery, suspense, history, demons, guardians, ghosts, friendship, fear, loss, love...
I loved that it questions the value of time ~ what would be important to you if you knew you had a timeframe?
The characters are amazing!  The main and supporting characters all drew a strong reaction.  Sara and Nathan of course are my favorites, but some of the supporting characters left lasting impressions.
The editor - Leah - horrible woman.
The best friends - Geri and Dalton - created in the image we all hold of the women we want to spend our time with.
The author has given Nathan the ability to learn to use various powers and was a pleasure to watch how that unfold.  The relationship between Sara and Nathan was both playful and serious, but also at times, so much more than what most people are given.
The story was well written and entertaining.  I enjoyed the twists and turns in the last few chapters.  The end was not exactly what I was expecting, but so nicely done.  I closed the book with a sigh, loving the finish but wishing there was more.
Posted by Beverly at 1:06 AM 0 comments