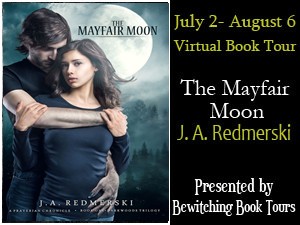 This virtual book tour is presented by Bewitching Book Tours.
You can see the entire tour schedule by clicking HERE.
Welcome to The Wormhole and my day on the tour.
It is my pleasure to feature J.A. Redmerski and
The Mayfair Moon. 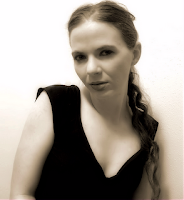 The author has joined us for an interview:
? When did you first realize you wanted to be a writer? I was thirteen when I started my first novel and I haven’t stopped since then. Writing has been the one consistent thing throughout my life and I hope to be doing it forever.

? How long does it take you to write a book? Typically, the shortest amount of time is around 6 months and that doesn’t include editing.

? What would you say is your most interesting writing quirk? I never stop writing for the day at the end of a scene or sentence, but instead right in the middle of them. This helps me to prevent writer’s block and keeps my mind fresh and buzzing with what I’m going to write next.

? Do you have a routine that you use to get into the right frame of mind to write? I start out with a Starbucks Venti Vanilla Iced Latte and a very quiet apartment.

? How do you decide what you want to write about? I get a lot of inspiration from television and movies, but ultimately, I write about whatever has been scratching at my brain for more than a year. Generally, an idea pops in my head and I decide at some point to let it all out in the form of a novel.

? What books have most influenced your life? Harry Potter, The Road by Cormac McCarthy and The Vampire Armand  by Anne Rice

? What is the first book you remember reading by yourself? Salem’s Lot by Stephen King

? What are you reading right now? Breathless  by V.J. Chambers

? What do you like to do when you are not writing? I love being outdoors, anything having to do with nature: hiking, walking, fishing, bike riding. But of course, I love to read and I also have an unhealthy obsession with astronomy and the Universe.

? What is your favorite comfort food? Sushi! I’m surprised I haven’t had mercury poisoning yet.

? What do you think makes a good story? Honesty. And what I mean by that is writing a story that you as a writer and a person, sincerely wants to write and not something because of its popularity. I think the best stories are told when an author feels their story and not when one has simply decided to write about something because everyone else is.

? Who would you consider your favorite author and why? That’s a really difficult question! Honestly, I want to just say my three favorite authors are Neil Gaiman, Anne Rice and J.K. Rowling. Neil Gaiman because I love his dark, witty and unique style – he’s the rock star of the literary world! Anne Rice because most of my early inspiration to write was because of her Vampire Chronicles. And J.K. Rowling because…well, I’m sure that’s obvious.

More About the Author:
J.A. Redmerski is a  Contemporary Fantasy and YA writer - author of THE MAYFAIR MOON and DIRTY EDEN. She’s  a mother, werewolf & zombie fanatic, book addict and a happy hermit obsessed with the Universe. Oh, and AMC's "The Walking Dead".
Jessica started her first novel at the age of thirteen and has been writing something ever since. Generally, she loves characters in life and on paper. She pays attention to people, especially those whose personalities make them different from the rest of us: the drug addict roaming the Laundromat that talks to himself, the young, inattentive mother in the park with the meanest kid on the playground - (the entire cast of 'Swamp People') - characters fascinate Jessica and she hopes that it shows in her  literary work.

After a nightmarish encounter with a werewolf, seventeen-year-old Adria Dawson loses her sister, but gains the love of a mysterious young man and his legendary family.

Strange and tragic things begin to happen in the small town of Hallowell, Maine: residents come down with an unexplainable ‘illness’ and some disappear. In the midst of everything, Isaac Mayfair is adamant about keeping Adria safe, even from her sister whom he has warned her to stay away from.

As unspeakable secrets unfold all around Adria, impossible choices become hers to bear. Ultimately, no matter what path she takes, her life and the lives of those she loves will be in peril. As she learns about the werewolf world she also learns why her place in it will change the destinies of many.
Posted by Beverly at 5:00 AM 2 comments