I got Sin Undone today!!! 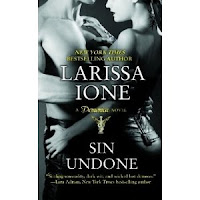 Amazon Product Description: HER TOUCH IS DEADLY - As the only female Seminus demon ever born, master assassin Sinead Donnelly is used to being treated like an outcast. She spent decades enslaved, and now vows she'll die before she'll relinquish her freedom again. Then Sin's innate ability to kill her enemies goes awry: She creates a lethal new werewolf virus that sparks a firestorm of panic and violence.

HIS HUNGER CAN'T BE DENIED - Half-werewolf, half-vampire Conall Dearghul is charged with bringing in Sin to face punishment for the plague. And she's no stranger: He's bound to her by blood, and the one sexual encounter they shared has left him hungering for her raw sensuality. Worse, Sin is the underworld's most wanted and Con soon learns he's the only one who can help her . . . and that saving her life might mean sacrificing his own. 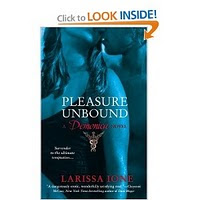 I love this series! You have to check it out!

Book 1: Pleasure Unbound:
Amazon Product Description:
In a place where ecstasy can cost you your life . . .


She's a demon-slayer who hungers for sensual pleasure-but fears it will always be denied her. Until Tayla Mancuso lands in a hospital run by demons in disguise, and the head doctor, Eidolon, makes her body burn with unslakable desire. But to prove her ultimate loyalty to her peers, she must betray the surgeon who saved her life.
Two lovers will dare to risk all.
Eidolon cannot resist this fiery, dangerous woman who fills him with both rage and passion. Not only is she his avowed enemy, but she could very well be the hunter who has been preying upon his people. Torn between his need for the truth and his quest to find his perfect mate before a horrific transformation claims him forever, Eidolon will dare the unthinkable-and let Tayla possess him, body and soul... 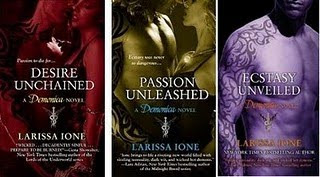 Book 2: Desire Unchained:
Amazon Product Descripton:
Pleasure is their ultimate weapon . . .
Runa Wagner never meant to fall in love with the sexy stranger who seemed to know her every deepest desire. But she couldn't resist the unbelievable passion that burned between them, a passion that died when she discovered his betrayal and found herself forever changed. Now, determined to make Shade pay for the transformation that haunts her, Runa searches for him, only to be taken prisoner by his darkest enemy.

A Seminus Demon with a love-curse that threatens him with eternal torment, Shade hoped he'd seen the last of Runa and her irresistible charm. But when he wakes up in a dank dungeon chained next to an enraged and mysteriously powerful Runa, he realizes that her effect on him is more dangerous than ever.

As their captor casts a spell that bonds them as lifemates, Shade and Runa must fight for their lives and their hearts-or succumb to a madman's evil plans.

Book 3: Passion Unleashed
Amazon Product Description:
FORBIDDEN TEMPTATIONS
Serena Kelley is an archaeologist and treasure hunter-and a woman with a secret. Since she was seven, she's been the keeper of a powerful charm that grants her health and immortality . . . as long as she stays a virgin. But Serena isn't all that innocent. And when a dangerously handsome stranger brings her to the brink of ecstasy, she wonders if she's finally met the one man she cannot resist.

FATAL DESIRES
Wraith is a Seminus demon with a death wish. But when an old enemy poisons him, he must find Serena and persuade her to give him the only known antidote in the universe-her charm. Yet, as she begins to surrender to his seductions and Wraith senses the cure is within his grasp, he realizes a horrible truth: He's falling for the woman whose life he must take in order to save his own.

Book 4: Ecstasy Unveiled:
Amazon Product Description:
A DEMON ENSLAVED
Lore is a Seminus half-breed demon who has been forced to act as his dark master's assassin. Now to earn his freedom and save his sister's life, he must complete one last kill. Powerful and ruthless, he'll stop at nothing to carry out this deadly mission.
AN ANGEL TEMPTED
Idess is an earthbound angel with a wild side, sworn to protect the human Lore is targeting. She's determined to thwart her wickedly handsome adversary by any means necessary-even if that means risking her vow of eternal chastity. But what begins as a simple seduction soon turns into a passion that leaves both angel and demon craving complete surrender.
Torn between duty and desire, Lore and Idess must join forces as they battle their attraction for each other. Because an enemy from the past is rising again-one hellbent on vengeance and unthinkable destruction.

Labels: in my mailbox

In My Mailbox - this week

My mailbox has been almost a daily source of excitement for me! I have been very fortunate in the giveaways here in our blog world!  Thanks to everyone who has been hosting and congrats to all who have been winning!  This is a picture of what I have been lucky enough to get this week! 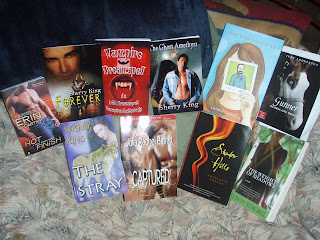 Hot Finish by Erin McCarthy - won on About Happy Books - thanks Sabrina!
The Stray by Sherry King - won on Fang_tastic Books - thanks Roxanne!
Sherry King sent me The Stray herself and included extras!!! She also signed and sent me Forever, The Ghost Amethyst, and Vampire Dreamspell.  Thanks so much Sherry!!! You can check her out here.
Captured by Julia Rachel Barrett - won on Michelle's Book Blog - thanks Michelle!
The Impostor's Daughter by Laurie Sandell - won at Happy Mom of 5's blog - thanks Chrissy!
Shadow Hills by Anastasia Hopcus - won at For What's It Worth - thanks Karen!
Gunner: Hurrican Horse by Judy Andrekson - Early Reviewer's Group
The Weight of Shadows by Alison Strobel - won at Busy Moms Who Love to Read - thanks Pam!
Posted by Beverly at 12:14 AM 4 comments