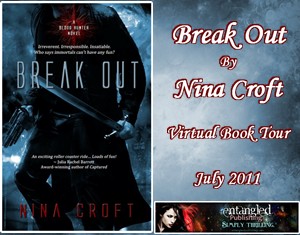 This virtual book tour is being presented by Bewitching Book Tours.
You can get to the entire tour schedule by clicking HERE.
I purchased this book from Amazon - you can buy one HERE and try to WIN one HERE!
You can read my review by clicking HERE!
Welcome to my stop on the tour!
Today I am pleased to feature Break Out by Nina Croft!
We have an interview and a book excerpt!

Interview:
? When did you first realize you wanted to be a writer?
I actually started writing when I was working as a volunteer in . We lived in a village on the edge of . A spectacularly beautiful place, but no electricity, no TV, no internet, and very few books. I wrote as means of entertaining myself, and I’ve been hooked ever since.
? How many jobs did you have before you became a writer?
I only had one career but lots of jobs. After leaving university, I trained as an accountant in . But once I’d qualified, I realized that I wanted to see something of the world and do something a little more interesting than sitting in an office all day. I went with my husband and worked as a volunteer in for four years. We loved it, but it left us with a love of the sun and itchy feet. After that, we spent numerous years mixing travel with work (whenever the money ran out) until we finally settled down in the remote mountains of southern where we bought a dilapidated almond farm. So maybe you could add builder and almond farmer to the jobs as well!
? How long does it take you to write a book?
It depends on the final word count, but I’m not a very disciplined person so I try to give myself rules, and one of those rules is a daily number of words to write. At the moment, it’s 2000 words per day. So I’d write a first draft for an 80000 novel in around 40 days. Then I have to edit and that can take…
? What would you say is your most interesting writing quirk?
I have to wait until my characters start talking before I can start to write. I do a lot of planning beforehand, and at some point in the process, they will begin to chat away in my head. Then I can start to write their story.
? Do you have a routine that you use to get into the right frame of mind to write?
I actually hate routines, so I try to avoid them.
? Where do you get your ideas or inspiration for your characters?
Everywhere. Books I’ve read, movies, songs sometimes inspire me. Probably the biggest inspiration for my latest hero, Ricardo Sanchez, was the Star Wars films—especially Han Solo. I was in love with Han Solo from an early age. Of course, Rico is also a vampire, so he’s a sort of Han Solo with fangs.
? How do you decide what you want to write about?
There are so many stories I want to write, that often the most difficult thing is choosing which project to pursue. In the past, it’s probably been a case of which characters spoke the loudest. Now, it’s a little easier as I have contracts to fulfill.
? What books have most influenced your life?
Lord of the Rings because it showed me how huge a story could be. Ann Rice’s Interview with a Vampire, as it was the first book I’d read that made me see vampires as heroes rather than villains.
? What do you like to do when you are not writing?
Reading of course, walking my dogs, riding my horse, sitting in the sun, drinking wine and admiring the view.
? What is your favorite comfort food?
Cheese. I love cheese – cheddar and stilton and gorgonzola…
? What do you think makes a good story?
Characters I really care about, and a fascinating problem for them to solve.
? Who would you consider your favorite author and why?
This one’s way too hard, there are too many authors I love, and it changes day by day. I recently finished Karen Marie Moning’s Fever series, and I loved that.
? What book, if any, do you read over and over again?
Loads of them. At the moment, I’ve just started, The Time Traveler’s Wife, for the fourth time.
Fun random questions:

For your reading pleasure: A Break Out Excerpt:


Finally, she took him in her mouth. He opened his eyes and stared down the line of his body to watch as her red full lips encircled his cock. His fingers tightened in her hair, pressing her closer, and she sucked harder.
He forced his hand to relax, stroked her hair, her throat, anywhere he could touch as he continued to thrust leisurely into that hot, wet mouth. The pleasure built inside him. He was so close now, his breath coming in short sharp pants. She cupped his balls with her hand, squeezed, and he exploded.
Pleasure shot through his balls, up his shaft, melted his spine. His back arched and he came. For long moments, he pumped into her mouth, unable to stop. Finally, she drew back, her tongue snaking out to lick her full lower lip.“Umm.”
“Umm?”
“You taste…” She licked her lips again and a tremor of residual pleasure shot through him, jerking his hips. “…delicious.”
At the word, another hunger rose, and his gums ached with the need to taste her. “Come here.” He tugged her to her feet, pulling her close against him. Everything was hot and wet. He kissed her mouth, her cheeks, burrowed his face in the curve of her throat, licking the moist skin, finding the point where the blood flowed close to the surface, touching his tongue to the pulse. She wasn’t fighting him off now, and he knew he could have her. His hunger rose as his fangs grazed the tender flesh. It had been days since he had fed, but still he couldn’t bring himself to make the final move.
If he tasted her, what would he discover?
Right now, he only suspected what she was. If he knew for sure, would he have to put a stop to this charade? Put a stop to Skylar? And even if he did prove she was a liar, it wouldn’t explain what she was really up to. He doubted he could make her talk, and he wanted to know.
Actually, he wanted her to tell him of her own free will, and for that he needed more time.
When he didn’t move, she wriggled against him. His hunger roared, straining against the fierce hold he had on his control. If she moved again, he knew he would lose it, take her. And then she ground her hips into him, and his control slipped away. There was only one sure way he could stop himself now. He stared at the red button on the wall beside him.
Dios, he hated cold water.
He shifted Skylar so he held her in one arm, and taking a deep breath, he slammed his other hand onto the button.
The effect was instantaneous.
Skylar screamed, and this time it wasn’t from pleasure.
Thanks for stopping by The Wormhole!
Happy Reading!
Posted by Beverly at 6:00 AM 9 comments