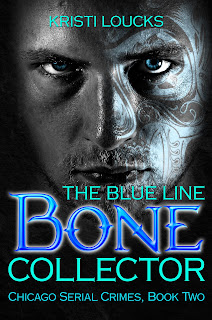 The Blue Line Bone Collector: Chicago Serial Crimes, book 2 by Kristi Loucks
Devon Cole was not prepared for the call that came in the middle of the night. And no one was ready for the wake of bodies that surface in the days that follow an attack on Molly Shaw. Dakota's twenty-three year old friend and co-worker who unknowingly survived an attack by a killer dubbed The Blue Line Bone Collector. What follows is a dark and twisted tale with an origin that pre-dates a killers existence. 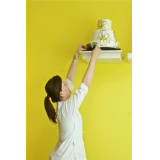 Author: Kristi Loucks is a Pastry Chef and Cake Designer with a degree from Le Cordon Bleu Chicago. Her writing and storytelling has always been a way to manage the day to day stresses of working in the world of restaurants and food service. Kristi is currently hard at work on her Chicago Serial Crimes Series! Ms. Loucks currently resides in a suburb of Chicago.


Excerpt from Book Two of the Chicago Serial Crimes Series, The Blue Line Bone Collector:
It had been unseasonably warm for early February in Chicago, but at two o’clock in the morning, the streets were still relatively quiet in Logan Square. Having lived in the city most of her life, Molly Shaw was no stranger to public transportation and she was always aware of what was happening around her.

She had just moved through the turnstile at the “El” station and she was headed towards the steps to the platform, when she noticed a tall thin man lurking in the shadows at the top of the landing. Her instincts put her on edge as she tried to get a read on him before ultimately turning back towards the street behind her. She could feel the rumble of the “El” as it coasted into the station above them, and she prayed that the man would be lured towards the train.

As she made it back to the turnstiles, she chanced a look back in the direction of the stairs. When she didn’t see the man, she breathed a sigh of relief while she berated herself for her evident paranoia. Her relief was short lived. When she turned back toward the exit, Molly caught a glimpse of the man as he reached out from her right side.

She gasped as she saw the glint of a steel blade and tried to scream as his hand clamped over her mouth, just before the blade tore through her skin.

“Such lovely bone structure,” he whispered, staring at the blood that coated her skin and running his thumb over the bones of her wrist.

Molly was fixated on the blood that ran in thin rivulets across the veins protruding from the back on her hand. That was when she noticed the markings that covered the hand of the man who held her captive.

Though she was spared further contemplation of those markings when pain shot through her system. Molly cried out behind his hand, which reeked of bleach and cigarettes, as she heard the sickening crackle and pop of bone and ligaments when he savagely wrenched her arm back at an awkward angle. In an instant, her survival instincts kicked into high gear, briefly drowning out the pain.

She fought hard as he pulled her back towards the shadows from which he’d emerged, slamming her forehead against the rail as she struggled against him. She could feel the warmth of her blood as it ran down her temple. She frantically dug through her bag, which hung to her left side, looking for anything that would give her a moment’s advantage.

Her fingers finally gripped her salvation, a tiny bottle of pepper spray that Devon had given her a few weeks back. She’d thought it was ridiculous at the time, but if she got out of this, she was certain she would kiss him for his part in her escape.

She quickly slammed her eyes shut as she sent a burst of the pepper spray over her right shoulder in the direction of her attacker, feeling the burn against her own skin as well.

The moment she felt his fingers open slightly, she bit down as hard as she could on the hand covering her mouth and flung her head back towards his face. He fell backwards as her skull connected with his and she quickly flung herself towards the turnstiles and out towards the street in the hopes that a car or a taxi might stop for her. Her only hope was that the man wouldn’t pursue her with witnesses.
Posted by Beverly at 5:00 AM 0 comments