This blog tour is presented by Enchanted Book Promotions.
Welcome to The Wormhole and my stop on the tour.
It is my pleasure to feature KH LeMoyne and Destiny's Mark. 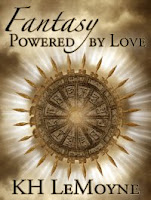 Author Bio
A former technology specialist, KH LeMoyne now writes romance fulltime with series in urban fantasy, high fantasy, and scifi/futuristic. She lives in Maryland with her wonderful husband and corgi. Much to her dismay, she rarely encounters supernatural beings other than on paper. Visit her website: http://www.khlemoyne.com/  or blog: http://fantasypoweredbylove.com/

THE GUARDIANS OF EDEN:
A race of beings created in a Sanctum at the far edge of Eden. Co-existing with mankind, they safeguarded human souls and the promise of eternity—until a virus killed all over the age of eighteen. The surviving children fled to the Sanctum for protection, children raising children without the full legacy of their history and knowledge. Two hundred years of solitude have produced a race of semi-immortals fortified with powers and intellect but lacking the mates who will make them whole and allow them to fulfill their covenant with mankind.

Title: Destiny’s Mark (Guardians of Eden #3)
Author: K.H. LeMoyne
Genre: Adult Urban Fantasy / Paranormal Romance
The only difference between fate and destiny is choice.
Tsu Halan, Guardian defense master, has honed his skills and waited patiently over the centuries for the covenant’s promise of a mate to share his soul and a family to cherish. Close enough to taste fulfillment, the dark echoes of the past threaten with danger and death.
Jai Dashkov harbors her own painful secrets of harsh betrayal and tender loss. Her desperate search to reclaim her life doesn’t allow room in her heart to deviate for love.
Together they are stronger than apart, but the promise of the covenant is a perpetual test. One that Tsu and Jai must conquer in time or suffer an eternity for their failure.

“You want to know how folding works?” Sagari’s face twisted with concentration as she flipped her bo and planted the tip into the training mat.
Jai fisted her hands on her hips. “This can’t be a secret. I’ve seen Tsu come and go. You and Saladin as well. I’ve had my own unintended and nauseating trips.”
“You need to close your eyes. That will help. Think quick.” Sagari pursed her lips, the smile barely held back, before she grasped Jai’s wrist.
Bent over seconds later, with her hands on her thighs to catch her breath, Jai glared at the woman laughing at her. She glanced around, recognizing the open area beside the chapel. “You asked me to spar with you this morning, remember? No more sneak folds.”
“It’s so much fun to have someone new to do things with.”
Jai regretted opening her door this morning. At the time, Sagari’s offer seemed a reasonable request. Her defense skills were nonexistent, and Sagari promised an easy workout. To be fair, her call to Frank motivated her.
He’d been reluctant to pass on bad news, but Tsu dug it out of him.
The new team had confirmed evidence of infant trafficking in the data, which not only increased the jeopardy for Jai’s daughter but highlighted darker secrets connected to Jai’s past. Tsu revisited the issue of her mugging. His conclusion, chillingly logical. Her search had stirred a pot that Cheng’s organization didn’t want exposed.
Further initiatives would require more secrecy, more stealth, and increased caution.
All good reasons to accept a workout invitation. Jai blew out a slow breath and advanced on Sagari. “I’m not a toy.”
“Of course not. We’re going to be good friends. Pretend otherwise if you want, but you have great spirit, and I’m drawn to that. It’s been so long since I’ve shared anything personal with a new girlfriend. We’ll give Tsu a small heart attack with the things we’ll drum up.”
Jai could only stare at her in astonishment. She’d met only two Guardians other than Tsu and Quan, and they couldn’t be more different. Saladin had his reserved demeanor down to an art form, and Sagari, with her tight, colorful clothes and braided hair that refused captivity, wore her openness and confidence like a second skin.
Still chuckling, Sagari snapped a wide leaf from the bush beside the chapel. She dipped her finger in Romi’s gold paint can and dotted the leaf’s edge. “We’re here.”
She folded the leaf in half and opened it again. The dot had transferred to the opposite edge as well. She pointed to the new paint marker. “Now we’re here.”
“This is missing the nuance of how,” Jai commented wryly. “Can I do this? On purpose?”
Sagari handed over the leaf with a shake of her head. “Human mates can only fold to their partner. I’m told it’s rather like a homing beacon, a sharing of heartbeats or souls. But only born Guardians can fold to specific locations. We sort of…hmm, imagine the destination and we’re pulled there.”

Giveaways
One random commenter who posts a message at one of the blogs and leaves their email will receive a $25 Amazon or B&N Gift Certificate.