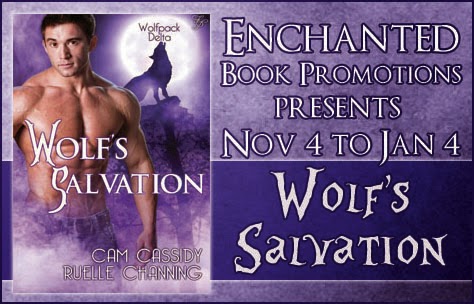 Welcome to The Wormhole and my stop on the tour.
It is my pleasure to feature Wolf's Salvation and the authors Cam Cassidy and Ruelle Channing.

Cam Cassidy grew up in a small farming community.  The lack of neighbors and companionship of mostly cows, dogs and horses left plenty of time for her passion of reading to flourish.  It wasn't long before her imagination ran away and she was creating her own stories.

As an adult, is married and the mother of three who loved keeping her on her toes.  The ever present cup of coffee in her hand and notebook in her purse has become a trademark.  While she works full time in the medical field, her spare time is filled reading and writing.  Watching her daughter ride horses, the boys dirt bikes, four wheelers, running around from one sports field to the next, she never missed jotting down that all important plot twist.

Her love romantic suspense and paranormal creatures, werewolves in particular, are showcased in her recent works.  Stay on the look out vampires, some alpha military men and cowboys that are all screaming in her head to get their stories done.

Somewhere between running kids and catching up on laundry, her hard work paid off with her first publication of Wolf's Heart, co-authored with Ruelle Channing, by Fated Desires Publishing. The second book in the series, Wolf's Salvation November 2014.

Her solo career begins with A Wolf Awakens, published by Decadent Publishing  coming in 2015

* When did you first realize you wanted to be a writer? I’ve always enjoyed writing.  Working and family kept me busy, it wasn’t until my kids were older that I became serious about it.

* How many jobs did you have before you became a writer? Not sure if waiting tables in high school counts, but other than that only 2.  I still work full time in the medical field with the same company for the last 27 years.

* What would you say is your most interesting writing quirk? My family would say it’s talking to my computer screen.

* Where do you get your ideas or inspiration for your characters? I have a very active family.  We all hunt, fish, my daughter and I ride horses.  I pick little things that we see along the way.

* How do you decide what you want to write about?  Not sure if I choose or it chooses me.  I have numerous works in progress, it all depends which voice is talking the loudest that day.

* What books have most influenced your life?  There are so many.  JR Ward, Gena Showalter, Lora Leigh on the romance side but I also love Patricia Cornwell, Dean Koontz and James Patterson.

* What are you reading right now?  Breaking Elle by Antonetta Candela (great read by the way)

* What do you like to do when you are not writing? Spend time in the barn. Working or playing with the horses makes any day perfect.

* What is your favorite comfort food? Pizza with everything but anchovies. I hate those little buggers.

* What do you think makes a good story?  You have to have strong characters that as you read you can feel their emotions.  No giving away the plot right off the bat, twists and turns keep the reader emotionally invested.

* Who would you consider your favorite author and why?  JR Ward.  It was her Blackdagger Brotherhood series that opened up the world of romance novels to me.

Ruelle Channing’s Bio
Ruelle Channing is a writer of Paranormal Romance. She grew up in a small community with books as her best friend. Often as a child, she was scolded for propping up her book to read while she did her chores, even while her mother encouraged the interest. Her father was illiterate, but never let that keep him from learning. Most of the librarians at both her school and local library knew her by name as she was a frequent visitor there. After graduation from high school, Ruelle worked in a sewing factory. She married at age 21 and had the first of three daughters two years later. Her girls have also inherited the love of reading. As stay at home mom for 17 years, Ruelle still wondered what she wanted to be when she "grew up". Having lived in books all her life, as an adult it has been her dream to create a world in which she would be proud to have others become entrance in. Her recent works include the Wolfpack Delta Series, which was written with friend and co-author, Cam Cassidy, and she has several other works in progress.
Ruelle Channing links

Title: Wolf’s Salvation
Author: Cassidy and Ruelle Channing
Genre: Paranormal Military Romance
JT Howard’s heart had hardened over the years as he struggled with the demons of his past.  Once he became the Alpha of Wolfpack Delta, he gave it up for a life of quiet solitude.  JT’s solitude is shattered as he finds his pack embroiled in a war.  When he dives into active duty, he will do whatever it takes to protect what is his.
Lou Piacella life has been filled with struggles, each one overcome, but leaving behind a scar that she’s hid behind a smart mouth and cocky attitude.  A tech at MedVision Genetics lab, she finds herself an unwilling ally to the Wolfpack Delta.  Finally released, she thought her life could return to normal.  How could she have been so wrong?


Thrown together by circumstances beyond their control, JT and Lou will be forced to face the demons of their pasts as they struggle to stay one step ahead of MedVision.  Can two people broken over time come together and find salvation one another?

The air was colder and damp under the cloak of the trees as she began walking through the woods. Stepping up over branches and tripping over ivy made the walk seem more like an obstacle course. She pondered whether JT set it up this way so that no one could get near his house; he seemed the type.
Just getting through a thicket, she spun around at the sound of leaves rustling, something coming quickly in her direction. The growl she heard made her heart nearly stop. It was like nothing she had ever heard before, nothing that she wanted to hear again. Turning away from the sound, she started to run but slid to a stop, falling on her ass as a large black wolf appeared in front of her.
Crawling backwards to get away, she said, “Nice dog…go find a bone. Wait, not a bone. I have skinny bones, no meat.”
The wolf’s eyes seemed to glow as he stalked towards her. This was not how she planned to spend her morning; being eaten by a wild animal. With every inch she backed away, the wolf took another step closer. It moved with her like a predator, each step placed carefully, slowly. It was as if it was enjoying making her squirm.
“I’m not afraid of you!”


It was a lie of course and she wondered if the wolf could smell her fear. She glanced quickly behind her and saw the fallen tree. She would be stopped soon, trapped. As her hand landed on a stick she wrapped her fingers around the rough cold bark, and when she went to scoot back, she quickly swung the stick at its head. Carlee squealed and she scooted back again as large jaws opened and snatched the stick from her hand before she could land the blow. She knew she was in serious trouble.
Posted by Beverly at 5:00 AM 0 comments