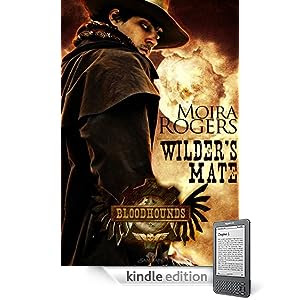 
Think a vampire-hunting bloodhound is dangerous? Try threatening his woman.
Bloodhounds, Book 1
Wilder Harding is a bloodhound, created by the Guild to hunt down and kill vampires on America’s frontier. His enhanced abilities come with a high price: on the full moon, he becomes capable of savagery beyond telling, while the new moon brings a sexual hunger that borders on madness.
Rescuing a weapons inventor from undead kidnappers is just another assignment, though one with an added complication—keeping his hands off the man’s pretty young apprentice, who insists on tagging along.
At odds with polite society, Satira’s only constant has been the aging weapons inventor who treats her like a daughter. She isn’t going to trust Wilder with Nathaniel’s life, not when the Guild might decide the old man isn’t worth saving. Besides, if there’s one thing she’s learned, it’s that brains are more important than brawn.
As the search stretches far longer than Wilder planned, he finds himself fighting against time. If Satira is still at his side when the new moon comes, nothing will stop him from claiming her. Worse, she seems all too willing. If their passion unlocks the beast inside, no one will be safe. Not even the man they’re fighting to save.
Warning: This book contains a crude, gun-slinging, vampire-hunting hero who howls at the full moon and a smart, stubborn heroine who invents mad-scientist weapons. Also included: wild frontier adventures, brothels, danger, betrayal and a good dose of wicked loving in an alternate Wild West.
My thoughts:
I love Moira Rogers books!  I haven't read everything of hers, but I believe I have everything so I will get to them.


The story has a bit of everything.  Love, loss, honor, betrayal, friendship, and intrigue.
This story puts a different spin on the paranormal by adding the bloodhound - as opposed to the traditional werewolf type shifter.  I was thrilled to see so much compassion from Wilder when it came to the ghouls, Archer, Hunter, and Nataniel.  The idea behind the Bloodhounds seems to be that they are somewhat mindless in their hunting of vampires, but he proves this theory wrong both with his behavior and the way he treats people.  I loved the human side of his beast-like persona.
The book has a few main characters, but I also enjoyed the secondary characters very much.  Polly made me laugh out loud when she was setting up Satira's disguise.


This was a great story, read it through in one sitting - would recommend it to fans of all things paranormal - as long as they don't mind some hot and heavy sections.
Posted by Beverly at 5:23 PM 1 comments