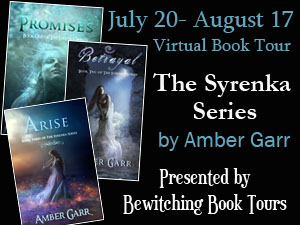 This virtual book tour is presented by Bewitching Book Tours.
The tour schedule is HERE.
Welcome to The Wormhole and my day on the tour.
It is my pleasure to feature
Amber Garr and The Syrenka Series.

About the author:
Amber Garr spends her days conducting scientific experiments and wondering if her next door neighbor is secretly a vampire. Born in Pennsylvania, she lives in Florida with her husband and their furry kids. Her childhood imaginary friend was a witch, Halloween is sacred, and she is certain that she has a supernatural sense of smell. She writes both adult and young adult urban fantasies and when not obsessing over the unknown, she can be found dancing, reading, or enjoying a good movie.

Promises: Book One of The Syrenka Series
By Amber Garr

Sometimes following your heart can end up destroying the ones you love.

When seventeen-year-old Eviana Dumahl is faced with the responsibility of an arranged marriage and clan leadership, she is forced to choose between the life required of a mermaid and one of a teenage girl simply infatuated with the wrong guy. Kain, her devoted fiancé would make a wonderful husband except that she’s been in love with Brendan, a shape-shifting selkie, ever since they were kids.

Choosing to abandon her family, her clan, and her life with Kain will have dire consequences far beyond anything she could have imagined.

A war is brewing amongst the clans and Eviana unwittingly becomes a pawn in the intricate schemes of a twisted mastermind. With Brendan’s life on the line, she has no choice but to involve those who she once considered friends. Amidst encountering senseless tragedies and immense loss, Eviana discovers that she is more valuable as a clan leader than anyone ever suspected. Her survival is not only dependent upon the loyalty of her friends, but also on her acceptance of a life that she had so adamantly tried to escape.

Betrayal: Book Two of The Syrenka Series
By Amber Garr

Life as a mermaid can be suffocating.

Eviana Dumahl has returned home as a clan leader, an orphan, and a heartbroken teenage girl.  Her parents are dead and her boyfriend, Brendan, has decided that he needs some time away.  While battling her inner turmoil, Eviana is forced into the war that Lucian Sutherland has incited amongst her own kind.  With the help of Kain, her friend and formally betrothed, the two work together to prove that they deserve their birthrights as young merfolk leaders.

When The Council requests a demonstration of Eviana’s mermaid powers, she finds herself with an opportunity to win back Brendan’s heart.  But her orders to train with a repulsive merman and the presence of an attractive new suitor challenges Eviana to embrace her leadership and resist temptation. Lucian is after her, and no one seems to understand why.  Loyalties are tested as the casualties increase, showing Eviana that sometimes it is impossible to delineate between friends and enemies.

Arise: Book Three of The Syrenka Series
By Amber Garr

With power comes the responsibility to accept its consequences.

After the betrayal of those closest to her, Eviana Dumahl struggles to cope with her new reality. Kidnapped, broken, and confused, she is forced to engage in a war that will alter merfolk politics forever. With her estranged father leading the charge, Eviana has no choice but to stand by his side. Her continued existence hinges on the acceptance of the power growing inside her, even when that means embracing the family’s dark lineage.

Kain Matthew will sacrifice the world for Eviana. And he is not alone. As time runs out, her friends fight to save her life and theirs. An unlikely alliance gives them the edge they need to take a stand, although it keeps Eviana’s heart trapped in the past. A new discovery explains some of her previous mistakes, but it may not be enough to stop her father’s plans. Merfolk, selkies, and water sprites work together to save their kind, only in this final battle, not everyone will survive.

In the striking series conclusion, Eviana will learn the true meaning of power, sacrifice, and love.

Tour wide giveaway details
One paperback package: All three signed books plus SWAG (US only)
Three ebook packages: All three books in series via coupons (US and international)


a Rafflecopter giveaway
Posted by Beverly at 7:30 AM 1 comments 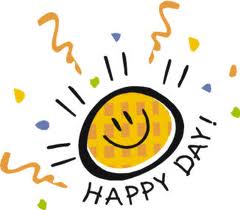 Congrats to Kelly H!
Winner of the Summer Giveaway Hop.

The winner has been notified and the book is on its way to the address provided on the form.
Thank you to all the followers who entered!
Happy Reading.
Posted by Beverly at 4:30 AM 0 comments