This virtual book tour is presented by Bewitching Book Tours.
Click HERE to see the tour schedule.
Welcome to The Wormhole and my day on the tour.
I am pleased to promo
DV BeRkom and Serial Date. 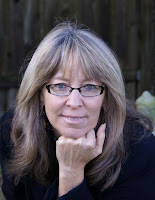 About the Author:
DV Berkom grew up in the Midwest, received her BA in Political Science from the of , and promptly moved to to live on a sailboat. Several years and at least a dozen moves later, she now lives outside of with her sweetheart Mark, an ex-chef-turned-contractor, and writes whenever she gets a chance. You're welcome to email her at dvb @ dvberkom.com or chat with her on Facebook and Twitter- she loves to hear from readers as well as other writers.
For more information, you can visit her website at www.dvberkom.com.

A retired assassin. A serial killer with a social agenda.

A politician with a fondness for free-range livestock.

Determined to leave her old life behind, retired assassin Leine Basso accepts a job working security at one of television's most popular reality shows, Serial Date. When a contestant is found dead in the prop closet, it appears the killer is one of the 'bachelors' on the show- an ex-con billed as a serial killer- but the detective in charge of the case isn't so sure.

Santiago Jensen, a homicide detective with a playboy reputation is assigned to the reality show murder case. There's instant attraction when he meets Leine Basso, but until they catch the murderer, he has to keep his distance.

When Leine's estranged daughter is abducted by a man claiming to be the real killer, she's forced to rely on old skills to find her, and must come to terms with who she really is. She soon realizes the murderer may be a grisly remnant from her past and she'll need to use all of her cunning to stop him and rescue her daughter.


...and now to feed your need to read...
EXCERPT:
SERIAL DATE

Chapter 1
Peter Bronkowski peeled himself away from the prop closet. He needed air. The onlookers parted to give him space.
Oh my God, oh my God, they're going to shut us down. When this gets out the motherfuckers are going to crucify me. All the hard work, the hustling, the endless lunches listening to that blowhard Senator Runyon, all of it would be for nothing. Peter shook his head to clear it. His breath came out in fast gasps, threatening to hyperventilate.
At first, Peter thought it was a grotesque looking mannequin with fake blood stains down the front and side of its torso. The moment reality clicked, a jolt of shock split him, pooled behind his eyes and slid to his gut. With dawning comprehension, Peter realized the blood was real. And it was no mannequin.
It was Mandy.
Peter turned back to the prop closet. Everyone stared at him, as if he had the slightest idea what to do now. Fuck. He couldn't see a way out of this. Too many people had seen the body. He thought of his brother, Edward, but brushed the idea away.
Mandy was dead. Murdered. Sweet, small-town-sexy Mandy. Who would want to kill her? Now Tina, yeah, he could sort of see that, she could be quite the bitch. But Mandy? And which one of the cons did it? No getting around it, he'd have to call LAPD. They'd be swarming all over the place. Better find another home for Edward. He wasn't going to like that one bit. Edward didn't do well with change.
Gene Dorfenberger walked toward him, pushing people out of his way.
"Give him some room! The man can't think with you crowding him like that." Reluctantly, the small crowd began to disperse, a few stealing one last look at the gruesome sight.
Gene glanced at Mandy's body and shook his head. "Now why would somebody go and cut off her arm?" He edged closer, squatting to take a better look. "And an ear? What kind of sick fuck would do that?"
Peter froze. "Her ear's missing?"
"Yeah."
Peter shook his head to clear it. It can't be. He took a deep breath to try to stop the dizziness. Everything was spiraling out of control.
Originally slated as low-cost filler for summer, Serial Date had turned into the most watched reality show on television. Less than a year and a half ago he couldn’t get the mailroom clerks to return his calls much less the now regular invitations to private parties and dinners with the network brass. They all wanted a piece and Peter had happily parlayed the lust for the extraordinary profits generated by the show into extra bargaining power.
This is it. It's over. We'll never recover.
"It's going to be rough. You're going to have to do some major damage control." Gene's sharp gaze traveled from the massive amount of blood soaked into the costumes scattered around Mandy back to Peter.
Peter nodded, his expression grim. "We've got to get somebody legit in here so the cops'll think we're taking steps to keep the contestants safe."
If Gene took offense at the comment, he didn't show it. "I think I know just the person. It'll take some doing, but I hear she's strapped for cash."
Peter looked at Gene with disbelief. "She? Gene, we need somebody who'll keep the fucking cops at bay, not another broad on the set."
Gene shook his head. "Oh, this one ain't just another broad, believe me."
Posted by Beverly at 5:00 AM 1 comments