Bite My Books is hosting Ban This! Extending Banned Book Week for a whole month!
Word for Teens has a great post about it- check it out!
The American Library Association's Banned Book Week link is HERE.
You can get to banned book lists HERE.
Posted by Beverly at 10:39 PM 0 comments 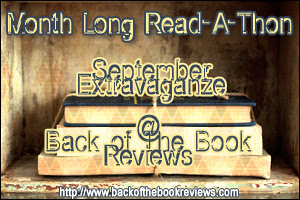 Kate and Ashley at Back of the Book Reviews are hosting the September Extravaganza Read-a-Thon, a month long read-a-thon!   Be sure to check out their daily author events/giveaways too.
Of course I am participating!  This is where I will post the books I read in September and links to their reviews!
1. Spirals of Destiny: Book One: Rider by Jim Bernheimer
Posted by Beverly at 9:28 PM 0 comments

Review: Spirals of Destiny: Book One Rider by Jim Bernheimer

Spirals of Destiny: Book One: Rider by Jim Bernheimer

***I received this book from the author in exchange for an honest review.

Amazon Product Description:
Forget everything you thought you knew about unicorns and maidens... A unicorn is not supposed to survive the death of its rider, but Majherri did. Now he is a pariah, mistrusted by the Greater Herd. To reclaim his lost honor and status, he will entrust the remnants of his life to a new human female while unraveling the mystery of his continued existence. Kayleigh Reese is not Battle Maiden material. She's three years older than any other recruit and has enjoyed a peaceful, nomadic life working with her artist mother. The rigors of joining the High-King's elite unicorn cavalry are clearly not for her. Now, with a bond to Majherri, she must overcome her mother's disapproval, the ire of her commanding officer and fellow trainees, and, most importantly, the secrets of her unicorn's past if she is to become a legendary warrior. To prevail, they must quickly come together as a team and unlock the powerful and dangerous magic inside them.
My thoughts:  Incredible!  This is a story like no other I have read.  Truly inspiring in the telling.  Jim Bernheimer has created a world in which the most feared and admired warriors are women who ride unicorns, they are called Battle Maidens.  These women are chosen by the unicorns and are trained on an enchanted island to become said warriors.  The characters that he has created to live in his world are amazing.  They are filled with courage and a sense of purpose.  He has developed in them all the makings of greatness tempered with the frailties of being human.  The unicorns, who are just as important, if not more so, than the human characters are magnificent.  They each have individual personalities and as many positives and negatives as their human counterparts.  The leaders are wise and attempt to be just, with the exception of one who is bitter and vengeful while still doing her best to train and carry on.
This story begs the questions of right and wrong, betrayal, loyalty, honor and belief.  It is a story of self-discovery.  Kayleigh is the main character and her journey is long and filled with challenges.  Her unicorn, Majherri, has lost his first rider and is an outcast among both humans and unicorns.  Kayleigh too is an outcast, chosen at 16 instead of 13 with a control problem with magic she doesn't understand.  The bond they form on the beach when they find each other is strong and both look to each other for salvation - from so much, their status, the battle, and even themselves.
The emotions of the characters envelope the reader.  On the edge of the seat as Kayleigh is challenged as lead rider, as she and Majherri charge into battle untrained, as the portal opens and they are thrust into the unknown.  I found myself caught in the whirlwind of those emotions as I read, laughing and crying, cheering and berating as the story gallops on.
Breathtaking in completion, this story is fantastic!  A must read for the adventure lover and the fantasy reader alike.  This story of self-discovery should be shared with readers young and old.  I eagerly await the sequel!

You can buy a copy of this wonderful adventure by clicking HERE and I highly recommend that you do!
Posted by Beverly at 1:16 PM 0 comments