This virtual book tour is presented by: 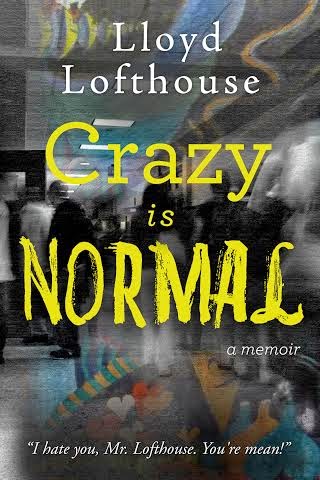 Publisher: Three Clover Press (June 14, 2014)
ISBN: 978-0986032851
Category: Biographies and Memoirs, Educators
Tour Date: October, 2014
Available in: Print & ebook, 386 Pages
Multi award winning author, Lloyd Lofthouse kept a daily journal for one-full school year and that journal became the primary source of this teacher’s memoir.
“Readers who envision eager students lapping up learning led by a Tiger Teacher will be disappointed. Lofthouse presents us with grungy classrooms, kids who don’t want to be in school, and the consequences of growing up in a hardscrabble world. While some parents support his efforts, many sabotage them—and isolated administrators make the work of Lofthouse and his peers even more difficult.
Throughout this memoir, though, Lofthouse seems able to keep the hope alive that there’s a future for each student that doesn’t include jail—thanks in large part to his sixth period journalism class and its incredible editor, Amanda.” – Bruce Reeves

Little did Lloyd Lofthouse know in 1999, when he married Anchee Min, that he was beginning a journey of discovery. His first trip to The Middle Kingdom was on the honeymoon with his bride, who introduced him to China and Robert Hart (1835-1911), the main characters in Lloyd’s first two novels, My Splendid Concubine andOur Hart. The next decade was a journey of discovery. Lloyd now lives near San Francisco with his wife–with a second home in Shanghai, China.
Lloyd earned a BA in journalism in 1973 after fighting in Vietnam as a U.S. Marine. While working days as an English teacher, he enjoyed a second job as a maitre d’ in a multimillion-dollar nightclub. His short story, A Night at the ‘Well of Purity’ was named as a finalist for the 2007 Chicago Literary Awards.
Lloyd has won 15 awards for My Splendid Concubine and 5 awards for Running With the Enemy.
Website: http://lloydlofthouse.org/
Author’s Den: http://www.authorsden.com/lloydlofthouse
Twitter: https://twitter.com/lflwriter
Facebook: https://www.facebook.com/pages/Lloyd-Lofthouse/168775989838050
Google+: https://plus.google.com/116728680363586998839/posts
Buy ‘Crazy is Normal:  Amazon
Lloyd Lofthouse guest post:

How did you get started writing a memoir?
The memoir, “Crazy is , a classroom exposé” was born, first, in 1994 as a daily journal, when I decided to document my job as a high school English [four classes] and journalism [one class] teacher.
At the time, I had no way to know that in the future, I’d actually use the journal to write a memoir. But without it, there was no way I would have ever remembered what happened on a daily basis. I’m not one of those rare individuals who have flawless memories that forget nothing and have instant recall for any moment in time.
But twenty years of teaching proceeded the year where I took the first step toward writing a memoir.
I started teaching in 1975-76, as a full-time intern in a master teacher’s fifth-grade classroom in an elementary school that had a high rate of childhood poverty and too many at-risk children.
The internship was followed by two years as a substitute teacher that included one semester as a long-term substitute in an elementary school where I replaced a teacher who had a heart attack and then died a few weeks later. At the time, I didn’t know that I was the twelfth substitute in twelve days, and two weeks after I arrived, the principal asked me to stay until the end of the school year. After I started working with those at-risk children, I understood why the former teacher probably had the heart attack.
When I was teaching at that elementary school in 1977, there was concertina wire strung along the roofs to keep the gangs off. It wasn’t unusual to arrive in the morning to see the custodians filling bullet holes in the doors with putty, and covering graffiti on the walls with fresh paint.
That elementary school was a few blocks from where I would eventually end up teaching children from the same community for sixteen years starting in 1989.
My first full-time contract as a teacher, in the same school district, was in 1978-79, at an intermediate school that had a high rate of child poverty in addition to children who belonged to violent and dangerous street gangs—the principal warned us to never leave the campus and walk into the local community, because it was too dangerous even during the day.
It wasn’t until 1993, that I’d work with high achievers, when I agreed to teach that one period of journalism. It made sense. After all, my BA was in journalism and my MFA was in writing.
Near the end of that school year in 1994—working with those incredible high achievers in journalism—it occurred to me that this was a unique experience and one day I might want to write about it, so I decided to keep that daily journal.
After I left teaching in 2005, and had published my first two novels, “My Splendid Concubine” and “Running with the Enemy”, I was copy editing the completed rough draft of my wife’s eighth book, a memoir, “The Cooked Seed” by Anchee Min, and I remembered that long-forgotten journal. I searched the garage where it had sat on a shelf gathering dust for 17 years.
I dusted the journal off, read it to see if there was enough material for a memoir; decided there was, and “Crazy is , a classroom exposé” was born. The journal is much longer than the memoir.
While I was writing the memoir, I became aware of the growing resistance across the country against the Machiavellian Common Core Standards that were funded mostly by Bill Gates, who partnered with the White House in an obvious attempt to destroy democratic public education in the United States and turn our children over to profit-driven Charter schools run by corporate managers and CEOs, and not elected school boards.
This insanity started with President G. W. Bush’s No Child Left Behind, which mandated that 100-percent of children ages 17/18 had to be college/career ready by 2014-15.
President Obama then launched his Race to the Top and Common Core State Standards designed to use standardized tests to rank and the fire teachers even though there is no evidence that these tests were a valid method to determine the quality of a teacher. In fact, there is a host of evidence that proves the opposite—that using the results of student tests to judge teachers was wrong.


I think my memoir offers dramatic, narrative evidence that it’s impossible to achieve a goal that mandates 100-percent of children by age 17/18 must be college/career ready—after all, at no point in history in any country in the world has this been achieved. In addition, there are already about three college graduates in the for every job that requires a college degree.
Posted by Beverly at 5:00 AM 2 comments