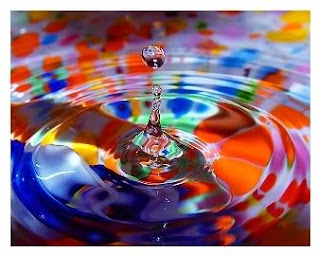 So the contest will be for an undisclosed (hopefully signed) book, at this time,
but I will post the prize as soon as I return from the book festival.
To enter please post a comment with your email address.
Because this is a followers Thank you contest, you must be a follower to enter.
One entry per follower only please.
Posted by Beverly at 10:30 PM 45 comments

A set of BEAUTIFUL CREATURES (hardcover) andBEAUTIFUL DARKNESS(ARC)! BOTH are signed by Kami Garcia and Margaret Stohl!!These books are awesome. Seriously awesome. If you haven't already read BC, you're crazy in my book ;-) And BD... well, all I can say is wow. It releases in October (Little Brown), but you so want to read it sooner if you can!

An ARC of NIGHTSHADE, by Andrea Cremer.First of all, the book has one of the best covers... EVER. Second, it doesn't let you down in the pages!"While other teenage girls daydream about boys, Calla Tor imagines ripping out her enemies’ throats." Uh, yeah. Enough said! (October 19, Philomel)

An ARC of ROT & RUIN, by Jonathan Maberry.With a tagline like "Benny Imura couldn't hold a job, so he took to killing" who wouldn't want to read this?Growing up in a zombie-infested world, Benny reluctantly agrees to train as a zombie killer, but ends up discovering what it really means to be human.  (October 5, Simon & Schuster)

An ARC of THE UNIDENTIFIED, by Rae Mariz.A funny and sharp novel in which 15-year-old Katey goes to school in the Game: a mall converted into a "school" run by corporate sponsors. Except she finds out she doesn't have rights to her ideas, her privacy, or her identity--and that's notokay with her. (October 5, Balzer + Bray)

An ARC of HALT'S PERIL, by John Flanagan.For all you Ranger's Apprentice lovers (of which there are many, over 2 million of these books have been sold, holy moly!) this is the ninth installment in the series. In this one: the false prophet of the Outsider cult escaped, and Halt is determined to stop him before he crosses the border. (October 5, Philomel)

An ARC of THE GOBLIN GATE, by Hilari Bell.This is the highly anticipated sequel to The Goblin Wood! Jeriah is thrust into a tangled web of political intrigue when he uncovers a dangerous secret--one that could change the fate of an entire kingdom! (October 5, Harper Teen)

An ARC of JANE, by April Lindner.This is a modern retelling of Jane Eyre--except in this one, Jane falls in love with a rockstar! Too bad they're haunted by a torturous secret from his past. (October 11, Poppy)

An ARC of THE WINDS OF HEAVEN, by Judith Clarke.Clarke, a Printz Honor winner, tells the compelling tale of Clementine and Fan: cousins and best friends. But when the summer's over, small tragedies threaten to tear them apart from each other... and themselves. (September 28, Henry Holt Books for Young Readers)

These are the books that she is giving away! I can't wait - I soooooooo hope that I win!  So many amazing titles!
Posted by Beverly at 8:11 PM 3 comments

I realize that it is not Monday, but I wanted to post an In My Mailbox because I have been getting some of the greatest books - - from all kinds of places!!!

I recently had company (my boyfriend's family) and his mother was reading The Lucky One by Nicholas Sparks.  When she finished it she gave it to me.  I thought that was sweet.  I have not read this one and so I have added it to my TBR Mountain.
Before the in-laws, so-to-speak, my family was here for my gramma's funeral.  While I was waiting for my sister's flight I wandered into the airport news shop and just had to buy a book.  Does that happen to you?  Anyway - I bought Catherine Coulter's Knock Out.  Of course they called the arrival of the flight and I didn't even open the book.  Too busy with everything that was going on to read it, it too has been added to my TBR mountain.

While I was spending time with my family, my dad mentioned that he had a number of books that he had finished, he doesn't have the same "keep all your books issue" that I do and he asked me if I would like to add a few to my library.  Of course I said sure and so these four books have found their way onto my TBR mountain as well. 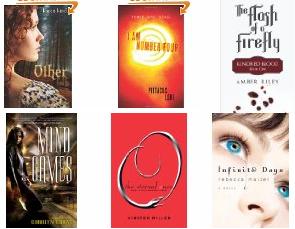 I have been incredibly lucky with the giveaways too! These are the books that I have won recently and have arrived in my mail this week.

I won: Other from Katelyn at The Bookshelf Sophisticate,

I am Number Four from June G at Writing is a Blessing,

Flash of the Firefly from Rebecca Wolfe,

Mind Games from Chasity at LLL808,

Eternal Ones from Kari at A Good Addiction, and

Thanks so much for all the great books!  Be sure to click on the links here to go check out their blogs!

I also won The Holy Reaper from Roxanne at Fang-tastic Books and The Hunted 2060 from Karissa at Karissa's Book Blog, but I don't have pictures of them yet.  You can find a pic of Hunted 2060 on Amazon, but it isn't the cover I have and this one is so much better I wanted to wait and post the actual cover with my review later.  Thanks to both of these bloggers too - and remember to check them out as well!
Posted by Beverly at 12:51 AM 17 comments