Review: Vampyre 2000: Life to the Lifeless by Christopher F. Benson 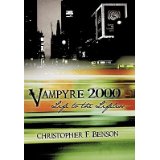 Vampyre 2000: Life to the Lifeless by Christopher F. Benson

Amazon Product Description:
Cornelius was able to roam freely among the streets of the city undetected for one simple reason. If that man next to you on the train or that woman at the theatre told you that he or she was a vampire, would you believe them? After being turned into a vampire during transport to America to become a slave, he was thrown overboard and drifted ashore on the New England coastline in 1804. Now, hardened from a lifetime of death and solitude, he sensed a void within that left him feeling so very alone. In search of something or someone to give his life some meaning, Cornelius had walked the earth for centuries. Finally, he found what he had been endlessly waiting for, her name was Rita. But Cornelius had many secrets, most importantly, a frightening reminder of his past that had plagued him for over one hundred years. Inescapably, that past could no longer be ignored and would prove to be an obstacle that would prevent Cornelius and Rita from ever being together. If neglected further, it also threatened to end both of their lives, a life Cornelius saw as a new beginning. Even if he chose to confront his demons to find some closure and stop running, was he powerful enough to accomplish it? Staring deeply into the face of such an overwhelming situation, were they foolish to believe that they could be together?

My thoughts:
It took me awhile to get into the story.  It is nicely written and interesting.  I love the issues that run through the book and that the author was so insightful to offer such ideas in a vampire story, very original.  This is the first vampire book I have read that brings racism into the plot, that and revenge drive Gregory to hunt Cornelius.  To balance out the monster that is Gregory, the autor brings the reader love as the driving force for Cornelius and Rita.

At the very start of the book, I wasn't sure if I truly loved Cornelius as a character.  I had a hard time with the fact that he had to kill to feed - just because it's different from most vampire stories.  But, as I read the story I found myself completely investing in Cornelius.  He is a carefully, thoughtfully created character who spans centuries with his ideas, ideals, and theories.  He is noble, compassionate and kind.  In contrast, Gregory is the very ipitmy of a heartless, thoughtless, vicious monster.  I love the twist with Gregory at the end.

I liked Rita's character from the start, but wonder at how rapidly she falls for Cornelius considering how much he warns her against it.  Her dedication to Cornelius and her desire to protect and be with him are heartwarming.

The book ends with an creative twist and I can't wait to start the next book in the series, Vampyre 2000: Ill of the Dead.


(I received this book in exchange for an honest review).
Posted by Beverly at 9:20 AM 0 comments

Amazon Product Description:
In the last year, Joanne Watson has died, fallen in love, fought demons and earned her Wings.

None of that compares to what's coming next....

And now there's the Resistance.

Joanne must choose again, this time between her fellow Winged and their burning desire for change or the archangels and the eternal vow she made.

Even in the afterlife, one truth remains--everything ends.

My thoughts:
I'm a L.M. Pruitt fan.  I was excited to read this series.  I enjoyed the first book, Winged and Uprising takes up where it left off; bringing us wonderful characters and a fast-paced, well written story.
The storyline is clever and creative, the plot is twisty and emotional.  You will run the gambit with these fantastic characters - laughter and tears.  I love Pruitt's characters because I feel like I know them.  The book plays in your mind like a movie as you read.
I suggest getting both books from the go, you won't want to wait for Uprising once you finish Winged and you will be looking for more at the end of this one!