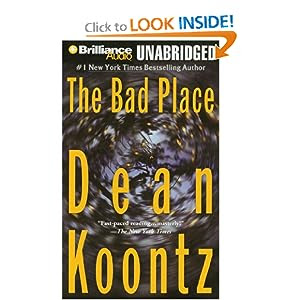 The Bad Place by Dean Koontz

Amazon Product Description:
Frank Pollard awakens in an alley, knowing nothing but his name - and that he is in great danger. Having taken refuge in a motel, he wakes again only to find his hands covered in blood. As far as he knows, he's no killer. But whose blood is this, and how did it get there? Over the next few days Frank develops a fear of sleep, because each time he wakes he discovers strange objects in his hands and pockets - objects far more frightening than blood. Husband-and-wife detective team Bobby and Julie Dakota specialize in high-ticket corporate security investigations, but when a distraught and desperate Frank Pollard begs them to watch over him, they can't refuse. Out of compassion - and curiosity - they agree to get to the bottom of his mysterious, amnesiac fugues. It seems a simple job: just follow a client who wants to be watched and tell him where he winds up. But as the Dakotas begin to discover where their client goes when he sleeps, they are drawn slowly into ever-darkening realms where they encounter the ominous figure stalking Frank. Their lives are threatened, as is that of Julie's gentle, Down's-syndrome brother, Thomas. To Thomas, death is "the bad place" from which there is no return. But Julie and Bobby - and their tortured client - ultimately learn that equally bad places exist in the world of the living, places so steeped in evil that in contrast death seems almost a relief...


My thoughts:
I read a lot of Koontz when I was younger.  13 books in a couple weeks once, had to quit reading his stories because I started to be afraid to go out in the dark by myself - I got over it!  I was thrilled when I got this audio book as a gift even though I had read it during what I called my "Koontz phase."  Many of the books had run together in my memory because I read so many in such a short period of time, but this one always stood out as truly scary and one of my favorites.  I was shocked at how much of the story had been lost by time and I found myself driving out of my way so I could listen longer in my car.

Koontz has created a wonderfully imaginative, dark story of evil at its finest. But what stood out the most for me were the characters.  Koontz has given us astounding characters, my favorite being Thomas.  The development of Thomas is sheer brilliance.  Thomas has Downs Syndrome and lives in a care facility.  The insight and understanding that went into the creation of Thomas is incredible.  All of the characters are fantastic.  They are well developed, cleverly written and span such a wide scope of personalities, abilities, and characteristics that it is hard to imagine that someone could create them and they seem as if they are truly real people.  The evil that is Frank's brother Candy is terrifying.  His sisters are frightening on a whole other level.  The doctor that we meet is evil of another kind, and I found myself revolted by his part in the family history and him as a person.  Koontz has a way writing his characters so you love and hate them as readily as Bobby and Julie do in the story.

The setting of the story varies as Frank "travels" and we learn about the places that he goes.  The descriptions of the people, places and things that are encountered on the travels are vivid and clever.  Koontz is a master wordsmith and draws the reader into the story with his language, creativity and imagination.  Well worth the read - or the listen.