This virtual book tour is presented by Partners in Crime Tours.
Click HERE for more information.
Welcome to The Wormhole and my stop on the tour.
It is my pleasure to feature Jon Land and Strong Rain Falling.

Series: Caitlin Strong, 5 (Can be read as a Stand Alone)

Mexico, 1919: The birth of the Mexican drug trade begins with opium being smuggled across the U.S. border, igniting an all-out battle with American law enforcement in general and the Texas Rangers in particular.

The Present: Fifth Generation Texas Ranger Caitlin Strong and her lover, former outlaw Cort Wesley Masters, both survive terrifying gun battles. But this time, it turns out, the actual targets were not them, but Masters’ teenage sons.

That sets Caitlin and Cort Wesley off on a trail winding through the past and present with nothing less than the future of the United States hanging in the balance. Along the way they will confront terrible truths dating all the way back to the Mexican Revolution and the dogged battle Caitlin’s own grandfather and great-grandfather fought against the first generation of Mexican drug dealers.

At the heart of the storm soon to sweep away America as we know it, lies a mastermind whose abundant power is equaled only by her thirst for vengeance. Ana Callas Guajardo, the last surviving member of the family that founded the Mexican drug trade, has dedicated all of her vast resources to a plot aimed at the U.S.’s technological heart.

This time out, sabotage proves to be as deadly a weapon as bombs in a battle Caitlin must win in cyberspace as well. Her lone chance to prevail is to short-circuit a complex plan based as much on microchips as bullets. Because there’s a strong rain coming and only Caitlin and Cort Wesley can stop the fall before it’s too late.
Read an excerpt:

Caitlin Strong was waiting downstairs in a grassy park bisected by concrete walkways when Dylan Torres emerged from the building. The boy fit in surprisingly well with the Brown University college students he slid between in approaching her, his long black hair bouncing just past his shoulders and attracting the attention of more than one passing coed.

“How’d it go?” Caitlin asked, rising from the bench that felt like a sauna in the sun.

Dylan shrugged and blew some stray hair from his face with his breath. “Size could be an issue.”

“For playing football at this level, I expect so.”

“Coach Estes didn’t rule it out. He just said there were no more first year slots left in the program.”

“How’d you leave it?” she asked, feeling dwarfed by the athletic buildings that housed playing courts, training facilities, a swimming pool, full gym and the offices of the school’s coaches. The buildings enclosed the park-like setting on three sides, leaving the street side to be rimmed by an eight-foot wall of carefully layered stone. Playing fields took up the rear of the complex beyond the buildings and, while waiting for Dylan, Caitlin heard the clang of aluminum bats hitting baseballs and thunks of what sounded like soccer balls being kicked about. Funny how living in a place the size of Texas made her antsy within an area where so much was squeezed so close.

“Well, short of me growing another four inches and putting on maybe twenty pounds of muscle, it’s gonna be an uphill battle,” Dylan said, looking down. “That is, if I even get into this place. That’s an uphill battle too.”

She reached out and touched his shoulder. “This coming from a kid who’s bested serial killers, kidnappers and last year a human monster who bled venom instead of blood.”

Dylan started to shrug, but smiled instead. “Helps that you and my dad were there to gun them all down.”

“Well, I don’t believe we’ll be shooting Coach Estes and my point was if anybody can handle an uphill battle or two, it’s you.”

Dylan lapsed into silence, leaving Caitlin to think of the restaurant they’d eaten at the night before where the waitress had complimented her on having such a good looking son. She’d felt her insides turn to mush when the boy smiled and went right on studying the menu, not bothering to correct the woman. He was three quarters through a fifth year at San Antonio’s St. Anthony Catholic High School, in range of finishing the year with straight “A”s. Though the school didn’t formally offer such a program, Caitlin’s captain D. W. Tepper had convinced them to make an exception on behalf of the Texas Rangers by slightly altering their Senior Connection program to fit the needs of a boy whose grades hadn’t anywhere near matched his potential yet.

Not that it was an easy fit. The school’s pristine campus in historic Monte Vista just north of downtown San Antonio was populated by boys and girls in staid, prescribed uniforms that made Dylan cringe. Blazers instead of shapeless shirts worn out at the waist, khakis instead of jeans gone from sagging to, more recently, what they called skinny, and hard leather dress shoes instead of the boots Caitlin had bought him for his birthday a few years back. But the undermanned football team had recruited him early on, Dylan donning a uniform for the first time since a brief stint in the Pop Warner league as a young boy while his mother was still alive and the father he’d yet to meet was in prison. This past fall at St. Anthony’s he’d taken to the sport again like a natural, playing running back and sifting through the tiniest holes in the defensive line to amass vast chunks of yardage. Dylan ended up being named Second Team All TAPPS District 2-5A, attracting the attention of several small colleges, though none on the level of Brown University, a perennial contender for the Ivy League crown.

Caitlin found those Friday nights, sitting with Cort Wesley Masters and his younger son Luke in stands ripe with the first soft bite of fall, strangely comforting. Given that she’d never had much use for such things in her own teenage years, the experience left her feeling as if she’d been transported back in time with a chance to relive her own youth through a boy who was as close to a son as she’d ever have. Left her recalling her own high school days smelling of gun oil instead of perfume. She’d been awkward then, gawky after growing tall fast. Still a few years short of forty, Caitlin had never added to that five-foot-seven-inch frame, although the present found her filled out and firm from regular workouts and jogging. She wore her wavy black hair more fashionably styled, but kept it the very same length she always had, perhaps in a misguided at-tempt to slow time if not stop it altogether.

Gazing at Dylan now, she recalled the headmaster of his school, a cousin of Caitlin’s own high school principal, coming up to her after the victorious opening home game.

“The school owes you a great bit of gratitude, Ranger.”

“Well, sir, I’ll bet Dylan’ll do even better next week.”

The headmaster gestured toward the newly installed lights. “I meant gratitude for the Rangers arranging for the variance that allowed us to go forward with the installation. That’s the only reason we’re able to be here to-night.”

She’d nodded, smiling to herself at how Captain Tepper had managed to arrange Dylan’s admission. “Our pleasure, sir.”

Now, months later on the campus of an Ivy League school in Providence, Rhode Island, Dylan looked down at the grass and then up again, something furtive lurking in his suddenly narrowed eyes. The sun sneaking through a nearby tree dappled his face and further hid what he was about to share.

“I got invited to a frat party.”

“I got invited to a party at this frat called D-Phi.”

“I know they’re Greek letters, son, just like I know what goes on at these kind of parties given that I’ve been called to break them up on more than one occasion.”

“You’re the one who made me start thinking about college.”

“Doesn’t mean I got you thinking about doing shots and playing beer pong.”

Caitlin looked at him as if he were speaking a foreign language.

“They call it Beirut here, not beer pong,” Dylan continued. “And it’s important I get a notion of what the campus life is like. You told me that too.”

“I let you go to this party, you promise you won’t drink?”

Dylan rolled his head from side to side. “I promise I won’t drink much.”

“That I’ll be just fine when you come pick me up in the morning to get to the airport.”

“Pick you up,” Caitlin repeated, her gaze narrowing.

“I’m staying with this kid from Texas who plays on the team. Coach set it up.”

Caitlin slapped an arm around the boy’s shoulder and steered him toward the street. “Because I may rethink my decision about shooting him.”

“I told him you were a Texas Ranger,” Dylan said, as they approached a pair of workmen stringing a tape measure outside the athletic complex’s hockey rink.

“What’d he think about that?” Caitlin said, finding her gaze drawn to the two men she noticed had no tools and were wearing scuffed shoes instead of work boots.

“He said he liked gals with guns.”

They continued along the walkway that curved around the park-like grounds, banking left at a small lot where Caitlin had parked her rental. She worked the remote to unlock the doors and watched Dylan ease around to the passenger side, while she turned back toward the hockey rink and the two workmen she couldn’t shake from her mind.

But they were gone. 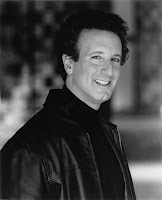 Author Bio:
Jon Land is the author of more than 30 thrillers, including the bestselling Caitlin Strong Texas Ranger series that includes Strong Enough to Die, Strong Justice, Strong at the Break, Strong Vengeance and, coming this August, Strong Rain Falling. This past fall he resurrected his longtime series hero Blaine McCracken in the E-Book Original Pandora’s Temple, which became a bestseller on both Apple and Amazon and was nominated for a Thriller Award as Best E-Book Original. A follow-up, The Tenth Circle, is slated for release in time for the holiday season. Jon’s first nonfiction book, BETRAYAL, meanwhile, was a national bestseller and was named Best True Crime Book of 2012 by Suspense Magazine. He lives in Providence, Rhode Island and can be found on the Web at jonlandbooks.com.

Review to follow.
Posted by Beverly at 5:00 AM 1 comments