This blog tour is presented by Bewitching Book Tours.
Click HERE to see the schedule.
Welcome to The Wormhole.
It is my pleasure to feature a review of
Perfect Weapon by Jade Kerrion. 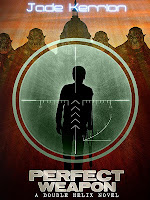 Don’t fear the army of genetically engineered perfect killers. Fear the cripple who leads them.

An alpha empath, Danyael Sabre is powerful, rare, and coveted, even among the alpha mutants who dominate the Genetic Revolution. Betrayed by his friends and abandoned to a life sentence in a maximum-security prison, Danyael receives freedom and sanctuary from an unlikely quarter—the Mutant Assault Group, an elite mutant task force within the military. Physically crippled and emotionally vulnerable, Danyael succumbs to the warmth of friendships and the promise of love he finds within their ranks.

Friendship and love, however, demand his loyalty, and Danyael rises to the challenge of training and leading the assault group’s genetically modified super soldier army. The super soldiers are faster and stronger than the military's human soldiers; their animal instincts spur ferocity and fearlessness in battle. But who is the perfect weapon—the super soldiers or Danyael, the alpha empath, who can, with a touch, heal or kill?

Adversaries swarm, like vultures around carrion; the pawn is once again in play. The threads of betrayal that sent Danyael to prison spin into a web, ensnaring him. When a terrorist group strikes , how far will Danyael go to defend a government that sent him to prison to die?

PERFECT WEAPON is the third novel in the award-winning Double Helix series.


My thoughts:
Fantastic finish!  Jade Kerrion has brought us another fast-paced, well-written wild ride for the end of a thrilling trilogy.  I love the characters.  Don't miss this story (all three books) about loyalty, friendship, betrayal, and the question of humanity.
Posted by Beverly at 5:00 AM 0 comments