This virtual blog tour is presented by Bewitching Book Tours.
Click HERE to see the entire tour schedule.
Welcome to The Wormhole and my day on the tour.
It is my pleasure to feature Jill James and Dangerous Shift. 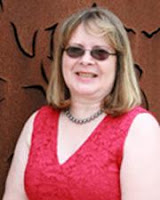 Jill James didn’t start out wanting to be an author. Along the way she wanted to be an astronaut, President of the United States, a lawyer, and a doctor. Once married with children she realized she could be all those things in the pages of the stories she wrote.

She lives in Northern California with her husband, who is the inspiration for all her romance novel heroes.

Shapeshifters live among us but remain unknown to most people except for the highest echelons of law enforcement, the military, science, and medical fields—until now.

SHE IS A LOOSE CANNON WITH AN ATTITUDE PROBLEM...

When a fatal virus strikes Shapeshifters all over the West coast, including members of the Shapeshifter Task Force in San Laura, California, reinforcements are called in from around the United States.

Lt. Nikki Hill of Missouri comes to San Laura and is partnered up with Lt. Sean Evans. They quickly butt heads on everything from proper police procedures to the moral ethics of euthanasia. They can’t seem to get a lead on the serial killer even as members of their own families are stricken with the virus. In their grief they turn to each other and hope they have time to discover if their relationship stands a chance or if they might just be the next victims of the species extinction disease.

Excerpt to feed your need to read:
Prologue

Sean Evans turned away as tears rolled down his ex-partner Colin Rodriguez’s face. The man sat by his fiancée’s bedside, her hand clasped in his, waiting for her to die. The sound of boot heels echoed up and down the hospital corridor. All marched past the closed door, none brave enough to stop at this room.
Sean stared at the dying woman. Paulette’s red hair was the only color in the monochrome-toned hospital room. Colin’s hand shook as he brushed the hair back from Paulette’s sweaty face. The virus wreaked havoc on the young woman.
Sean swallowed bile rising in his throat as the young Shapeshifter in the bed screamed. Her flesh boiled, roiling beneath the surface, and she screamed again. Her back arched off the bed. For months now, the Shapeshifter Task Force had been working to track down the cause of the virus and it struck close to home, killing two of their own. First, his own partner, Barry, and now, Paulette.
Her fingers turned into talons that dug into Colin’s hand. Blood dripped from the cuts onto the crisp, white sheet. Colin held her hand; the only sign of his pain was the grimace on his tanned face.
Sean rubbed his burning eyes, surprised to find tears on his own cheeks. He scrubbed the wetness away and raked his fingers through his hair. His tears wouldn’t help Paulette or Colin. Nothing could help them now. His hands clenched into fists at his side. He ached to punch a wall, anything to kill the tension in the room.
A scream built in his throat. Just last week he had sat here, forced to watch the young man, new to the task force, breathe his last. He stared into the ceiling lights, his eyes watered with the brightness. He repeated his personal mantra of calm and cool until his emotions mellowed, until they no longer threatened to overwhelm him.
He turned his head back as Paulette’s screams died down to whimpers. She had lost all control of her shifting. She grew fur and it disappeared. Her head changed shape as she shifted into a canine form, then a feline form, then back to her own. Her limbs flopped against the mattress as she convulsed. The shifting now happened every few seconds.
Colin threw himself across her body as if he could stop the tragedy from its conclusion.
“Noooo.” His voice ricocheted across the room and down the hall.
Sean rushed to his best friend’s side and ripped him up off of the dying Shifter. No one had discovered yet how the virus was transmitted. They didn’t need masks and gloves anymore, not in the last several months at least, but no one wanted to find out what full-body contact might do.
Colin struggled against Sean’s hold. Tears blurred Sean’s vision as Paulette struggled to breathe, and Colin’s cries became anguished sobs. His shoulders shook under Sean’s hands.
The monitor blared as Sean searched Paulette for any life signs and found none. Her chest didn’t move. She was gone. Just like Barry. Just like all the other Shifters in the past few months.
Sean turned away as Paulette’s flesh jellified and sank into the mattress, only a slight bump under the covers to show a living being had been there.
Colin’s anguish pierced his soul, and when Colin threw himself across the bed again.  Sean didn’t bother to stop him.  What did it matter when his friend had just lost his partner and the love of his life?
The sounds of harsh breaths and sobs still echoed in Sean’s ears when the door opened and the Captain of the Task Force rushed in. Sean turned to the man and shook his head.
Captain Connors motioned for Sean to talk to him outside. Sean shot a quick look to Colin and followed the captain outside to the hallway.
“Lieutenant Evans, with Robertson’s death today, added to the others, the task force is low on numbers. We will need to send word to the other task forces and ask for reinforcements.”
Sean’s hands formed into fists at his side. The human captain made no bones about his dislike of Shapeshifters, but Paulette’s body wasn’t even cold yet and he drudged up business decisions.
He took deep breaths and relaxed his hands. As the Lead Lieutenant in the task force, business took priority. Even over death.
“Will you send a request to the Southwest office in ?” Their own task force office covered the Northwest—Northern California, part of , and all of , state, and .
The captain shook his head. “A few cases have been reported in . We can’t risk it. I’ll request someone from the . No cases have been reported yet out there. There is a small task force in , , an hour outside .”


Jill has joined us here for an interview:
? When did you first realize you wanted to be a writer?


I piddled around with writing in my 20s and 30s, but I didn’t get serious about it until I hit the big 40 and wanted to do something with it. I joined RWA and got serious.

? How long does it take you to write a book?
About 4-5 months. Dangerous Shift took 6 weeks. That book was magic. The story was all in my head and I just needed to get it down on paper.

? What would you say is your most interesting writing quirk?
My books are all dreams I’ve had. Like watching a movie while asleep.

? Do you have a routine that you use to get into the right frame of mind to write?
Diet Pepsi, Swedish Fish candy, and a kitchen timer.

? How do you decide what you want to write about?
I usually start with a title. From there I get the hero/heroine and their names. Like building blocks, I just add things; hair/eye color, quirks, and a plot for them to fall in love.

? What books have most influenced your life?
Skye O’Malley by Bertrice Small. I love historical romance and hers are uber-hot and sexy.

? What is the first book you remember reading by yourself?
The Little Engine that Could. I loved that book.

? What are you reading right now?
End of Days by Robert Gleason and A Very Southern Affair by Elaina Lee

? What do you like to do when you are not writing?
Read! I read 3 to 5 books a week when I’m between books or in a writing slump.

? What is your favorite comfort food?
Mac and cheese. Yum!!

? What do you think makes a good story?
The Characters. Love after I can’t remember an author’s name or the title of the book I will remember a character.

? Who would you consider your favorite author and why?
Jennifer Blake. Her historical romances are to die for and she is constantly keeping herself up to date on the industry and what the readers want.

? What book, if any, do you read over and over again?
As a young lady I reread Little Women so many times the spine fell off. I had to duck tape it back together to read it again and again over the years.

Another giveaway:
One randomly chosen commenter will win an ecopy of this book.
Thanks for stopping - Happy Reading!
(Review to follow)
Posted by Beverly at 1:02 PM 4 comments