Hey. If Rembrandt and Van Gogh can go self-portraits, I can do a self-interview. I know what you're thinking. "Yeah. Well. You're not Van Gogh." You're right, of course. But doing three blogs around the release of three books in the space of ten months has created the answers to a whole lot interview questions.
On occasion I interview other authors. I always ask if there was a question they always wanted to be asked and had never had been and, if so, what was it? That was part one of what led me here. The second part is character interviews. When I do character interviews - let's face it - I'm interviewing my own imagination.
Soooooo, why not just ask myself the question I'd like to answer. The following is a sampling of some of my favorite all-time blog tour questions followed by one of the one questions I've never been asked, but would like to answer. (There are a lot.)

PART ONE: THE BOOKS

1. Do you feel that you can relate to one character in “this book” more than any other? And why?

One person recently told me that, if action figures of my characters ever come out, she wants to place a preorder for Ram. I have to agree with her. Because this saga has a lot of balls in the air (pun not intended, I swear). Ram is on the zigzag path of a hero's journey in a classical sense. Add to that the fact that he's drop dead sex and a one-woman elf and, really, what more could you want?

2. Many people feel the PNR genre is on the way out. Do you agree? Are there any changes you'd make to stay on the cutting edge of this genre? Will you change genres?

I think that will be true if more authors don't stop the vamp-by-number, more-weres-the-better rehash and try
for something different.
Before I started writing I spent two full years reading every PNR that had enjoyed any success to find out what                 had already been done, then set out to create something new. I get a lot of feedback that starts by saying, "I                 don't really know what genre to put this in..."  I love comments like, "She explodes stereotypes."
Also, I'm writing true Paranormal Romance. It's not paranormal suspense or paranormal mystery or paranormal                 thriller with a love interest back story. The romance is the main plot for me. And romance is never going to be on                 the way out.

I read Stranger in a Strange Land by Robert Heinlein when I was about twelve-years-old and have always been                 fascinated by the concept of other worlds that are similar, but not identical.  I combined that with my formal                 academic education in Paranormal Psychology, the fact that I always got along super well with boys, and voila.

2. When did you first realize you wanted to be a writer?

If people "decide", they're not really writers. My working theory is that, if you watch children carefully, they will show you who they really are by the time they are eight or nine. At that age I had two stacks of legal pads on my bed. One I used to sketch glamorous evening wear. The other I used to write my own Bobbsey Twins novels. I did spend a few years as a designer of glam dresses and was copied by the biggest names in the business. I had a big following in the Northeast, South America, and and still see some of my dresses show up in the movies. So I checked that off the list and did it until I was done. Now I'm writing.

3. Have you ever made big changes in your story because someone – your crit partner, a friend, or beta reader – really didn't like it?  Are you glad you did (or didn't)?

The answer is yes, but the someone was one of the characters. My Familiar Stranger started out to be a different story. My heroine was supposed to end up with the character of my choice. I was about 80% finished when another one of the guys (characters) started insisting that he was the one who should get the girl! I let him make his case and finally had to agree, but it caused a lot of overhaul.

Since then I have done a poll on Facebook asking fans who they wanted to end up with the girl and the big majority agreed with my character. It was him all along.

4. What unique factor do you think you bring to the book/story market?

5. What was the hardest part of writing your book?

The hardest part of writing is slogging through the emotion. I know that, if I'm crying so hard I can hardly see the                 PC screen, I've gotten it right, but it's also very emotionally draining and it ruins my looks for half a day.                 Conversely, if I'm lying in bed at night reading my own book and laugh out loud, I know I got that right as well.

6. Who were your major influences?

7. Do you have any advice for any other aspiring writers out there?

Yes. Writers are born, not made. Run as hard and fast as you can from a course on "creative writing" classes                 because nothing will kill your own embryonic art or creativity faster.

1. What are 5 fun/interesting facts about you?
I play bridge. I like going to movies in the daytime by myself (though I rarely get to). I teach magickal arts online.                 I worked for the airlines when I was very young and have traveled a lot. I speak canine. (Bonus #6. I do all my
own graphics work: covers, ads, book trailers, etc.)

2.  What is the most inspiring quote you have ever heard?
a. This actually relates to how busy I am. It's a motto used as my email signature on personal mail. THE QUOTE: "It's better to burn out, than fade away." - Rock of Ages, Def Leppard. Some people have wrongly attributed this to Kurt Cobain. Sorry. No. Others have said it wasn't Def Leppard, it was Neil Young, "It's better to burn out, than to fade away," - My, My, Hey, Hey. Also wrong. Neil Young used an extra "to". Big difference you see.
b. Winston Churchill is reported to have given a commencement address in which he simply took the podium and said, "Never give up," nine times.

Memnoch the Devil, Anne Rice. Also high up on the list: The Gate to Women's Country by Sherri S Tepper and Good Omens  by Terry Pratchett and Neil Gaiman. HOWEVER, I wouldn't recommend any of these to someone unless I knew that they were students of religious studies or, in the case of Gate, feminism.

Now, about A Summoner's Tale... If you haven't read Books One and Two, I hope you will do so before you read Book Three. Black Swan is a serial saga meaning that each book is actually a chapter installment in an ongoing story. This particular installment involved characters that were introduced in the first book.
If you read by Kindle, you will find A Summoner's Tale available at Amazon after release. If you another e-reader, you can still get the book in the form of an anthology that will be available in electronic format everywhere. The Order of the Black Swan Collected Tales, Books 1-3. $6.99 for all 330,000 words. This is a dream come true for me because readers will experience the first three books as conceived as one story.

a Rafflecopter giveaway
Posted by Beverly at 8:53 PM 0 comments 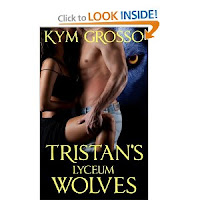 Charismatic and powerful Lyceum Wolves' Alpha, Tristan Livingston, is out for revenge after a devastating attack on his pack. Not only did he survive a building collapse, he orchestrated the rebuild of his chic, state-of-the-art nightclub within a week. Determined to mete out justice, he rescues a beautiful witness who may be the key to helping him find the perpetrators.

Dr. Kalli Williams, dedicated veterinarian, is hiding a secret that endangers not only her own life but the lives of wolves across the country. After being tortured by a savage vampire, she's reluctantly agrees to help the sexy Alpha in his quest to identify suspects; ones who'd kill her on the spot if they knew she existed. As Kalli places herself in the hands of the dominant wolf, she soon finds she wants nothing more than to submit.

My thoughts:
I was thrilled with the opportunity to read and review book 3 of the Immortals of New Orleans series.  I was hooked with book one, Kade's Dark Embrace, and hanging on with book two, Luca's Magic Embrace, and book three starts up right where two left me hanging!  You jump right back into the action with the same magnificent characters and are riding the waves in Tristan's Lyceum Wolves.
We meet new characters that fit right in and make you love them too.  This book is steamier than the others, for sure adult - open minded adult at that, so be ready for that.
This book is a roller coaster ride of emotions.  Packed with mystery, loyalty, betrayal, love, loss, brutality and sexuality - this is one you won't want to miss.  Start at the beginning - buy them all so you don't have to stop until you run out!  I can't wait for the next book.