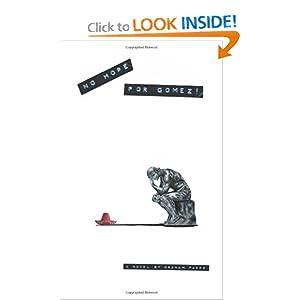 Graham Parke - author of No Hope for Gomez has requested a guest post on my blog! I am honored!   He will be checking this post and commenting back to those who leave feedback or comments!

He thought perhaps he could share a few moments of your day with a funny story.....so keep reading because this is what he had to say - - -

Just to be clear, it wasn't that the Avatar 3D director and I just missed each other, it was just that it was almost him, but slightly, just slightly mind you, someone else. I hate when that happens. You get so close, then, nothing…
But this incident started me thinking. This kind of thing has been happening to me a lot lately. And not only with celebrities. Just the other day, I almost ran into Garry, a friend of mine. From a distance, at an angle, it looked exactly like him. A dead-ringer. Could have fooled his own mother. It wasn't until I came closer, and he turned his head a few degrees to the left, that he revealed himself to be just a little bit someone else. The thing was, when I walked passed him, he gave me a long, thoughtful look. He looked me over, then shook his head and turned away. But I knew what it meant. I knew exactly what he was thinking. He had almost recognized me back!
Now, almost-Garry almost recognizing me back made the whole situation much more complicated. My mind went haywire, trying to understand this, trying to figure out the underlying meaning. Was it possible for someone who was almost Garry but not quite, to recognize me but only slightly? Was it? And, if so, what was I to him exactly? Was I someone who looked like someone he knew? It was hard to say, but it was unlikely. All I knew for a fact was that I was someone who was known by someone he looked like, but who wasn't him. And, in fact, to be fair, he probably didn't even realize that he was almost Garry but not quite.
Are you still following me?
Probably not. Probably your brain isn't defective to the point of reasoning this way. Good for you. You're better off for it. So, let's back-track a little. Let's just assume that the easiest explanation is the correct one. It usually is. And if it isn't, it should be. Really. Life is hard enough already.
So, I almost recognized Garry, and almost-Garry almost recognized me (that look was unmistakable).  This must mean that there is another Graham-and-Gary combo out there. This almost-Gary actually knows an almost-Graham. And this idea has big implications. As you know, and understand inherently in the core of your being, the universe is nothing if not a little fractally-inclined. Recursion-mad. If there are two sets, there must be more. There are probably thousands. Thousands of Graham-and-Gary combos. And this, of course, is upsetting. Because the first question that comes to my mind is, what if some of them are better at being a Graham and Gary combo? In fact; what if most of them are better? What if my friend Gary and I are in fact the worst of the bunch?
So, to summarize, I did ask almost-James Cameron for his autograph. Of course I did. I'm no fool. So, if you're interested in almost-autographs, check out my store on eBay. You won't be disappointed!"

Please feel free to leave comments for Graham Parke - as I said, he will be checking this post to comment to all my fantastic followers!  Happy Reading and have a great day!
Posted by Beverly at 12:06 AM 0 comments