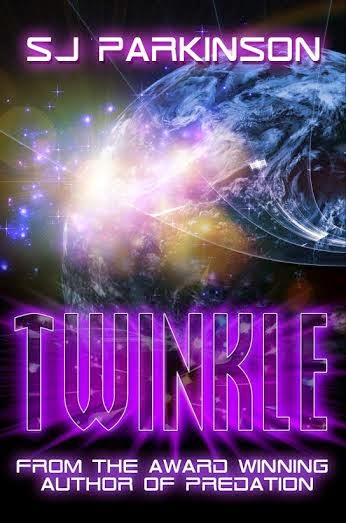 Publisher: SJ Parkinson (July 14, 2014)
Category: Science Fiction, Thriller
Tour Date: October, 2014
Available in: Print & ebook, 600 Pages
In the newest book from award winning author, SJ Parkinson, The richest man in the world wants to celebrate the July 4th holiday as never before. In a bid to get into the record books, a global fireworks show is staged from orbit. Satellites drop pyrotechnics into the atmosphere, thrilling everyone from the Arctic to the Antarctic with their rich colors and massive explosions in every time zone.
The next day, people around the globe begin to lose their sight. Governments crumble, society degenerates, and infrastructure falls into chaos. Humanity finds itself stumbling in the dark and losing all hope.
A few fortunate individuals retain their vision. Attempting to deal with the growing despair around them, they come together to discover the true purpose and origin of the affliction. They race to find a cure before the world is subjugated under an invading power.
About SJ Parkinson:

* When did you first realize you wanted to be a writer?
I've written short stories since primary school days, which is a long time ago. Creating a world with words has always had appeal to me. As a child, I was a voracious reader and enjoyed losing myself in various books.

* How many jobs did you have before you became a writer?
After my career in the military, I owned a computer gaming company for nine years. From there, I went to work in a series of IT jobs in the electronics, financial, confectionary, and education fields.

* What would you say is your most interesting writing quirk?
I typically write from multiple POV's throughout the story. I was eventually told that this was the most difficult way to write, but I found it to come naturally. A lot of my books don't have a main protagonist either. My stories are told from the perspective of many people and I think that reflects real life. I don’t use overt sex, profanity, or extreme violence, but I do write for a mature reader.
I feel validated in that approach as my novels have sold in fourteen countries, won international awards, and are highly rated. I also have a dedicated group of readers who are incredibly supportive of my work.

* Where do you get your ideas or inspiration for your characters?
When I'm travelling and waiting for a connecting flight, I'll sit at my gate and people watch as they walk by my gate. Humanity is diverse and I always see people who inspire characters. I make mental notes of appearance and their actions then jot them down later for future reference.
* How do you decide what you want to write about?
I have no shortage of ideas. My current project list has about twenty potential books at various stages of development. As an example, my wife went to the bathroom at a movie theater in and while waiting those few minutes in the hallway, I thought of another sci-fi project. My biggest issue is time and being able to focus on getting a story onto paper.

* What books have most influenced your life?
That list is almost endless. I have read thousands of books which influenced me in some way. Dune by Frank Herbert, Starship Troopers by Robert Heinlein, The Day of the Jackal by Frederick Forsyth, anything by Issac Asimov, etc. Good fiction lets you lose yourself in the world created by the author.

* What are you reading right now?
Today I usually read books to research future projects. However, the last book I read purely for entertainment was a biography of Nikola Tesla.

* What do you like to do when you are not writing?
I have many outside interests. I scuba dive, have dinner out with friends, and love to travel. My wife and I just got back from a long romantic weekend in a few weeks ago. When at home, I watch documentaries, read books, maintain my website, and social media presence. Plus, my wife always has a 'Honey-do' list handy if she feels I am otherwise unoccupied.

* What is your favorite comfort food?
with hot fudge and sprinkles. Sprinkles make everything taste better.

* What do you think makes a good story?
I take great pains to make my stories believable. If the reader sees errors in how a world is constructed then it will fall apart. A credible setting, realistic characters, and natural dialog are the cornerstones of a solid novel regardless of genre.
Typically, I do at least a week or two of research for a novel before writing a word. Twinkle was so broad in scope that the research for that novel took me three months. At the end of that time, I know the places, settings, and descriptions of the various places intimately and as a result I can write a lot faster. Often the research will give me information to take a character in a completely different direction than what I had initially envisioned.

* Who would you consider your favorite author and why?
Frederick Forsyth, Michael Crichton, Bernard Cornwell, and Tom Clancy all inspired me deeply. Forsyth’s plots are so realistic you can imagine them coming from a newspaper headline. Crichton takes existing science and brings it one step further. Bernard Cornwell sets his fictional books against actual historical events and Clancy’s ability to create tension is unparalleled. I try to use elements of each in my writing.

Fun random questions:
• dogs or cats?
Am a dog person, but currently I have two cats.
• Coffee or tea?
Coffee. Just one cup in the morning.
• Dark or milk chocolate?
Milk, but with fruit and nut pieces.
• Rocks or flowers?
Flowers in the rocks. I love hiking and neither choice is a bad thing.
• Night or day?
I'm a night person, but love a blue sky sunshine filled day to get out and have fun with friends.
• Favorite color?
A majestic imperial purple.
• Crayons or markers?
Markers.
• Pens or pencils?


Pencils can be erased if you make a mistake.