Blog Tour: Time of the Fairies: Afterlight by Joseph Corsentino

This Virtual Book Tour is presented by Bewitching Book Tours.
You can get to the entire tour schedule by clicking HERE.
Welcome to The Wormhole and my day on the tour!
It is with great pleasure that I present Joseph Corsentino
and his beautiful book Time of the Fairies: Afterlight!
The Oddities of Time of the Faeries: Afterlight
Hello, Wormhole readers!  Thank you for this invitation to write a guest blog.
The title of this blog, The Wormhole, was rather odd, whimsical, and intriguing, which prompted me to consider all the oddities inherent in my creative endeavor, Time of the Faeries: The Afterlight.
It’s a graphic novel...but more in the style of an art book.  There’s art, there’s a Sci-Fi/Fantasy novel, so we can only label The Afterlight, End of the World, book 1 in a 4 part series, as a graphic novel, yet it doesn’t quite look like one.
It’s illustrated...but with digital photographs, something still rarely seen in book form, and definitely not to this extent.
It’s about Faeries.  It says so on the the title...but the Faeries don’t come in until the second book in the series.
It begins...well, at the ending.  The entire first book.  Where does that leave us in the second, third, and fourth book?

Time of the Faeries: The Afterlight has been several years in the making, and I feel these these oddities are what make the series unique.  I hope you will agree and join me in The Afterlight. 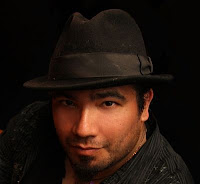 
Artist/Author
Joseph Corsentino is a storyteller at heart who chooses photography as his medium.  He took his passion for Science Fiction and Fantasy to where he began Time of the Faeries, an epic retelling of the faerie mythology.  His stunning, ethereal, and realistic faeries, angels, and vampires can be seen in private collections and magazines all over the world.  His first book, published by Imaginosis Publishing, is a prologue into the Time of the Faeries universe.  Joseph is currently completing the four-part Afterlight graphic novel series and making appearances at conventions such as Dragon*con. Title: Afterlight: End of the World
Author J. Corsentino
ISBN 978-0-578-08548-7
Size 98 pages
Genre: Full color fantasy art novel
Part 1 Time of the Fairies
Time of the Faeries: Afterlight is a four-part graphic novel series that explore the origins of the Faeries, the evolution of Angels and Vampires from a common Fae ancestor, and their own unique adaptations to the modern world. It follows the alliances and tensions that develop between these three species as they struggle to protect human civilization or shape it to their will. The Afterlight follows several lines of cause and effect, revealing possible versions of the Apocalypse at the hands of all three species.


In the first book, Afterlight, End of the World, we begin at the end with the Angel Apocalypse: a dying Earth, ravaged by war, now hosts only a few scattered pockets of humanity. These last survivors are being hunted to extinction by starving Angels, their energy consumed so that the Angels might live. Below ground, a small band of shape-shifting male faeries called the Phelans struggle to protect the last collection of human life in and a mysterious young girl who may hold the key to their survival. Above ground, as the winged forces amass to complete their genocide, a lone Angel named Halyon struggles to understand what went wrong, and why her race now hunts the very people they were charged to protect.
Now - for your viewing pleasure..... 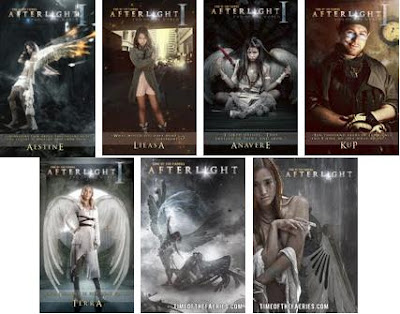 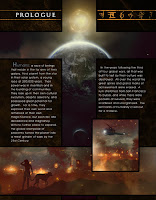 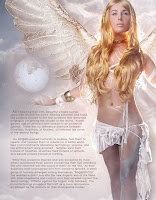 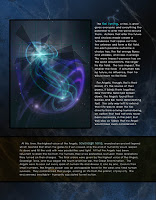 This is am amazing book - you truly must see it to fully appreciate it!
You can buy this amazingly beautiful book HERE.
Posted by Beverly at 3:03 AM 0 comments