This virtual book tour is presented by Bewitching Book Tours.
Welcome to The Wormhole and my day on the tour.
It is my pleasure to feature:
Courtney Rene and Shadow's End. 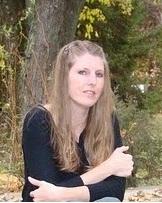 Courtney has joined us for an interview:
? When did you first realize you wanted to be a writer?  I didn’t actually have an epiphany like a lot of writers do.  Simply, I have always been a storyteller.  Since I was very small I have been making up stories and sharing them.  Being a writer was just the natural progression.

? How many jobs did you have before you became a writer?  I haven’t held many different jobs throughout my life, as I don’t actually like change all that much.  I was a camp counselor for several years.  I worked at Subway from 16-18.  I worked as a customer sales representative from 18-19. The rest is as a Paralegal.  Nothing all that glamorous but it pays the bills.

? How long does it take you to write a book?  The writing it, in draft form, only takes me a few weeks.  Revisions and edits can take me months.  The story is the fun part, it doesn’t take me all that long at all to tell the story.

? What would you say is your most interesting writing quirk?  I talk to myself a lot.  Well that is not entirely true.  To others I am talking to myself.  In my reality I am talking to my characters.  I know it sounds weird but when you are spending every spare moment in the mind of your story characters, then tend to become a tiny bit real.  At least that is true to me.  Maybe I am more weird than I realize.

? Do you have a routine that you use to get into the right frame of mind to write?  Not really, unless you count plugging in an ipod and blaring music to cover up any outside noise, a routine.  I can write anytime and anywhere generally as long as I can tune out the real world.

? What is the first book you remember reading by yourself? The Gingerbread   My sister made me read it and yelled at me the whole time. Her being a whole year older than me, made her smarter and apparently meaner.  I laugh about that now, but at the time, it really hurt my feelings.

? What do you like to do when you are not writing?  You are expecting me to say, read, right?  Well yes, that is true, but I actually do like to do other things than just read and write.  One of those things would be cooking.  I love to cook.  Trying out new things and ideas is fun.  The worst part though is cleaning up.  I wish I could just do the cooking and have someone else clean up after me, when I was done making all the mess.

? What is your favorite comfort food? Bread.  It’s an addiction.  Garlic bread, cheese bread, honey bread, butter bread, you name it, if it can be on bread, I will eat it.

? What do you think makes a good story? The conflict first.  You gotta have a good conflict.  Second would be the falling in love.  I am good at the conflict.  That I can do.  The love parts are a little shaky and harder for me.  I don’t write too deep in the way of love, but that is one of my favorite things to read.  If I could get past the giggles, I think I would be better at it.

? What book, if any, do you read over and over again?  I say the same book all the time.  Ride the Wind, by St. Clair.  This book is awesome!  It’s a thriller, it’s a historical, it’s a romance, it is wonderful.  I laugh, cry, get angry, and yes even get a little nauseous once or twice.  I love this book.


More About the Author:
Courtney Rene lives in with her husband and two children.  She is a graduate and member of the ’s Literature.  Her writings include magazine articles, short fiction stories, several anthologies, as well as her novels, A Howl in the Night and the Shadow Dancer series, published through Rogue Phoenix Press.  For a complete listing, visit www.ctnyrene.blogspot.com
Links:
www.ctnyrene.blogspot.com

The adventure and the struggle continue for Sunny, as the fight for control of is near.  lines have been drawn, not just by King Gideon, but also by the rebels that were once Sunny’s allies.

Due to unexpected trips to the ice realm and the fire realm, new allies are found to help build the Army of the Sun.  There are new worlds explored.  New friends and new enemies made.

Ready or not, Sunny must prepare for what is coming as well as decide where she belongs within it all.  But…what about prom?  What about Leif?  What about home?  How can she, just a seventeen year old girl, rule a whole world?  She’s not even sure if she can get through finals.

Short Excerpt:
Leif leaned toward Lucas until he was just a few inches away from his face, glared hard with half squinted eyes, and said, "They you also know she's mine. I found her. You don't get to have her."

That was it. I didn't care about the pain it was going to cause me. I purposefully and intentionally, pushed out a zap of energy at Leif where he held my arm. Not enough to really hurt him, but it was enough to have him jerk his hand off me in surprise and a bit of pain. Rage clouded his eyes for a moment as he directed his gaze on me.

I rounded on him with the full force of my own rage and completely ignored his. "You!" I said and poked a finger into his chest. "Don't get to own me! No one gets to own me."

"Sunny," Lucas said from behind me. "You have an audience."

Without taking my eyes from Leif, I swung an arm behind me with my hand up at him, hoping that I conveyed with that one action to shut up.

I did lower my voice at least. "You had your chance with me, but you chose to lie, to cheat, and to keep me in the dark at your mercy. You don't get to decide anything about me anymore."

I turned away from him and stepped back to my table where I again began to gather up the debris from lunch. "Go home, Leif. There's nothing here for you anymore."

"Yes, there is," he said softly from directly behind me. I hadn't heard him come up next to me. Then even softer he said, "This isn't over between us, Sunny. I'm not giving up."

I glanced over my shoulder at him. The man before me was the Leif I knew. The Leif I had fallen in love with. The ice was missing from his face and his eyes and my heart felt the pain of losing him all over again. Why did it still hurt to see him, to be next to him? "Leif," I whispered, "go home. Please."

Again without any regard to the people around him or the trouble he could cause, he phased into the shadows and was gone. Angry or not, my heart ached as he disappeared.

"Yeah, Lucas," I said as I stared at the place that Leif had vanished. I was suddenly so tired.

"Um…do you know that you have a slight glow of white around you?"