Welcome to The Wormhole and my pre-tour stop ~I am thrilled to feature Kathleen Collins and the Realm Walker series. 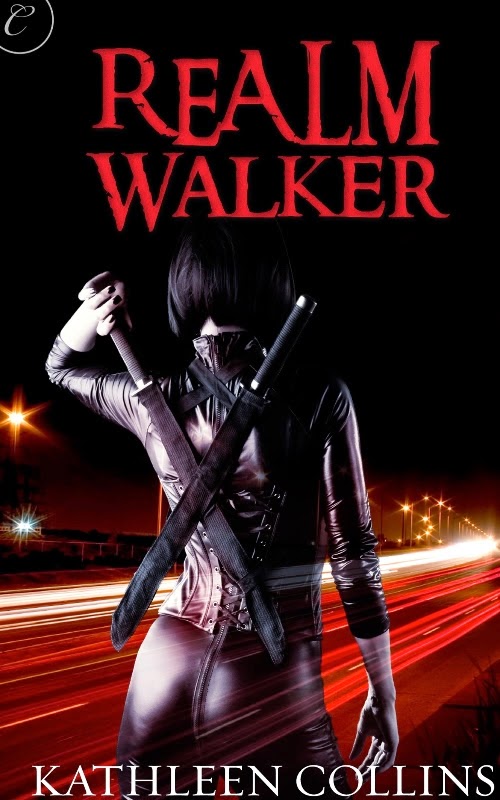 Book Description:
An estranged mate, a mangled body and a powerful demon who calls her by name…

As a Realm Walker for the Agency, Juliana Norris tracks deadly paranormal quarry using her unique ability to see magical signatures. She excels at her job, but her friends worry about her mysterious habit of dying in the line of duty without staying dead. That's only the first of her secrets.
Most people don't know Juliana became the mate of master vampire Thomas Kendrick before he abandoned her seven years ago. Most people don't know the horrors she endured at the hands of the vampire he left in command. Most people don't know her true parentage, or why a demon on a world-threatening rampage has taken a personal interest in her…
Even as Juliana pursues the demon, it goes after all she holds dear—including Thomas, who is back to claim her for his own. But if she can't reconcile her past and learn to trust herself again, she will lose him forever.

My thoughts:
I couldn't seem to read this fast enough.  I was hooked by the short story, The Making of Michael Bishop, and read that and  Realm Walker in one sitting.  The characters are incredible.  The author has built characters that are realistic while being larger than life.  She has created the kinds of people the reader can relate to, invest in, find in someone close to them or desire to be.
The story is wonderfully paced, intriguing and entertaining.  It twists and turns taking the read on an emotionally charged roller coaster ride.  I enjoyed learning more and more about the characters, their pasts and their relationships as the story progressed.
I was thrilled that I had book 2, Death's Daughter, because I started reading it as soon as I finished this one.

Book Description:
Keep your distance. Don't look him in the eye. Feed him and leave.

Michael D'Augustino is a priest in the time of the Inquisition. Marked as weak for his refusal to torture those charged with sorcery, heresy, devil worship or worse, he's given another task. Feed the prisoner in the cell in the darkest corner of the dungeon. With the edict comes a set of instructions.

Ever obedient, Michael does exactly as he is told. Until the night his charge doesn't eat and Michael has to enter the cell to find out why. Instead of the beast he believes to be imprisoned there, he finds a man. A broken, tormented man who asks for help.

But all is not as it seems and, before the night is through, Michael will be changed forever.
Available at Amazon and BN
My thoughts:
This little story is only 20 pages long, but I was hooked from the start and sad when I ran out of pages.  It is the perfect read to get a feel for Kathleen Collins writing style and set you up to want to read MORE from this author.

Kathleen Collins has been writing since Kindergarten. And while her ability has drastically improved, her stories are still about monsters and the people who play with them.
The rare instances that she actually finds some spare time, she spends it playing with her two boys. Three if you count her husband.
She is currently hard at work on her next book.