Blog Tour: The Half Breed Vampire by Theresa Meyers (Giveaway too!!) 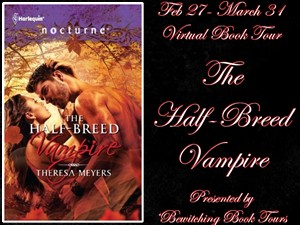 This virtual book tour is presented by Bewitching Book Tours.
You can see the entire tour schedule by clicking HERE.
Welcome to The Wormhole and my day on the tour.
It is my pleasure to feature Theresa Meyers and
The Half-Breed Vampire. 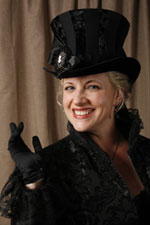 About Theresa Meyers:
Raised by a bibliophile who made the dining room into a library, Theresa has always been a lover of books and stories. First a writer for newspapers, then for national magazines, she started her first novel in high school, eventually enrolling in a Writer's Digest course and putting the book under the bed until she joined Romance Writers of America in 1993.
In 2005 she was selected as one of eleven finalists for the American Title II contest, the American Idol of books. She is married to the first man she ever went on a real date with (to their high school prom), who she knew was hero material when he suffered through having to let her parents drive, and her brother sit between them in the backseat of the car. They currently live in a Victorian house on a mini farm in the with their two children, three cats, an old chestnut Arabian gelding, an energetic mini-Aussie shepherd puppy, several rabbits, a dozen chickens and an out-of-control herb garden.
You can find her online on Twitter, Facebook, at her Web site or blogging with the other Lolitas of STEAMED!
http://www.theresameyers.com/
http://www.theresameyers.com/blog/
http://twitter.com/Theresa_Meyers
http://www.facebook.com/TheresaMeyersAuthor
http://www.ageofsteam.wordpress.com/
....and now - the book.... 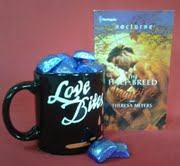 
Thanks for stopping by The Wormhole - Happy Reading.
Posted by Beverly at 5:00 AM 0 comments