This virtual book tour is presented by Bewitching Book Tours.
Click HERE to see the tour schedule.
Welcome to The Wormhole and my day on the tour.
It is my pleasure to feature:
T. Lynne Tolles and Mirror of Shadows. 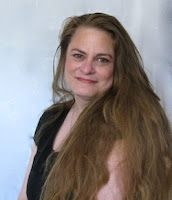 She has dropped by for an interview:
? When did you first realize you wanted to be a writer?
I'm not sure I EVER realized I wanted to be a writer. I'd say after I wrote Blood of a Werewolf, I definitely had the writing bug. I had so many ideas in my head of what I wanted the characters to do, I simply had to get them down on paper or go insane.

? How many jobs did you have before you became a writer?
Hmmm. I've been a sales person, a bartender, a production line worker, a receptionist, an engineering secretary, project coordinator and a bookkeeper.

? How long does it take you to write a book?
It can take me anywhere from three months to a year depending on how much life gets in my way.

? What would you say is your most interesting writing quirk?
I don't sit at a desk. I usually write on my lap top on my bed either sitting Indian style or lying on my back  - very peculiar, indeed.

? Do you have a routine that you use to get into the right frame of mind to write?
No. Not really, aside from getting the family off to school/work and out of the house.

? Where do you get your ideas or inspiration for your characters?
I suppose I use a lot of my life experiences in my writing. In the Blood Series, many of the characters were based on TV/Movie stars for their looks, but the personalities really evolved in my head and in the dialog.

? How do you decide what you want to write about?
Often I come up with a premise I think is cool, add some characters, mix it up in my head and see what comes of it.

? What books have most influenced your life?
Well I grew up reading Anne Rice and Stephen King and watching Creature Features every Friday night, but I suppose if I were to pick a few for influence, I'd say Anne Rice's Witching Hour was an all time favorite and really opened my eyes to the world of witchcraft. Later I became addicted to Jim Butcher's Dresden Files series. I love how he blends humor into his writing making it more natural.

? What is the first book you remember reading by yourself?
's Web.

? What are you reading right now?
Sheesh! I haven't had any time to read a book in a while, but I have been listening to R. R. Martin's Game of Thrones series when I have the time.

? What do you like to do when you are not writing?
Sleep...Just kidding. Let's see, I'm presently doing a cross stitch stocking, knitting a baby blanket, and I'm addicted to Nancy Drew Games.

? What is your favorite comfort food?
Baked Mac and Cheese

? What do you think makes a good story?
A bit of humor, a fun premise and characters people can relate to.

? Who would you consider your favorite author and why?
I'd have to say Jim Butcher is my favorite, but I really like L.J. Smith's stuff.

? What book, if any, do you read over and over again?
I think the only book I read more than once is the "Witching Hour" by Anne Rice.

T. Lynne Tolles is a lifelong avid reader of all things paranormal and now is a writer of young adult paranormal romances for readers 15 to 115. She grew up in the sunny California San Francisco bay area. She's the mother of two, wife to one and pet mom to three cats and Newfie dog.

Blood of a Werewolf is the first of five books in a series called, the Blood Series. Other titles include and Mirror of Shadows - both unrelated to the series.

Book Description:
Ella McKaye returns home for her grandmother's funeral to find she's inherited a ton of money and a run down mansion she never knew existed, called Grey Manor. Her greedy mother is appalled when the will stipulates specifically that Ella can't give her any of the inheritance.  She quickly throws Ella out of her home forcing her to take up immediate residence in the spooky old mansion.

Within minutes of entering her new home she has a strange interaction with a creepy old mirror in the main hallway and the ghostly inhabitants of the past get more and more agitated the longer Ella's there. Nearly fatal back to back accidents make Ella start to wonder if she's angered some ghost or if there is something more sinister at work.

Will Ella unravel the deadly mystery before she becomes a ghost herself? Or will fate take another one of the Grey ancestors to the grave.


Short Excerpt:
It was a perfect day for a funeral, if there is such a thing—gloomy, gray, and cold. With steady tears of rain, the heavens seemed to be mourning along with the funeral guests. Though Ella stood strong as the pastor droned on, she would never be consolable for the loss of her beloved grandmother, Rose Grey McKaye. Ella had known for a while this day was coming as her grandmother combatted bouts of cancer, a stroke, and dementia, but all of that was not enough to prepare her for the overwhelming loss she now felt.
Ella heard no voices of condolences from those who one by one took her hand in sympathy. She only heard the rain tapping on the shiny mahogany casket covered in a blanket of chrysanthemums and peonies in front of her. Occasionally she would nod her head to the speaking sympathizer but she never took her eyes off of the coffin. Instead, she watched as a drop of water hung to the tip of a fern frond, gathering more volume until it could no longer hold on and dropped down the curved lid of the casket, and then meandered down the side stopping only for a moment by one of the carrying handles. It continued down to mingle with other drops at the base of the aluminum stand. It lingered and swelled until it could no longer resist the relentless tug of gravity and it fell to the fake green grass carpet laid out to disguise the recently excavated mound of dirt from the grave into which her grandmother would soon be lowered.
The long line of umbrella-toting guests passed before her then scattered among the graveyard to their warm, dry cars to go on with their lives. How odd, Ella thought, that time doesn’t stop for a moment to acknowledge the passing of one so loved. She felt sure that she hadn’t taken a breath since she had received the call two days before, notifying her that her grandmother had died. How would she ever survive life without her grandmother?
Ella’s childhood had been hard and she’d grown up fast and insecure in herself. The only happy memories she’d had as a child were in those blessed, short-lived visits to Grandma Rose’s house where Ella knew without a doubt she was welcome, safe, and loved.
Ella’s mother had not been a bad person, but Ella had learned at an early age that she was an anchor to her mother’s freedom. Patricia had been widowed when Ella was a toddler. She had no family of her own to speak of, and found herself a single mother with no job and no real skills. First the parade of men came, none of which ever seemed to measure up to her late husband, and then came the drugs which made the unhappy, lonely woman lost and unstable. Needless to say, this brought about a rather turbulent life for Ella’s early years.
A warm hand touched Ella from behind, guiding her away from the men now lowering the casket into its new home. They cleared away the fake grass carpet, revealing the reality and finality of what was happening. Goodbye Grandma Rose, Ella said without speaking. I love you so...and the car door shut on Ella’s words and pulled away from the curb as its wipers slapped the sides of the windshield with a squeaky but constant beat.
Posted by Beverly at 5:00 AM 1 comments